INORDINATELY high taxation not only fails in its avowed purpose of providing a revenue, but it curbs business; by driving capital into unproductive channels, and it encourages wasteful expenditures for which the future will have to provide.

These comments might come as a result of a study of Canadian conditions, they are, in reality, the opinions of Andrew W. Mellon, Secretary of the United States Treasury, and are based on manifestations across the line.

David Lawrence, in an interview with Mr. Mellon appearing in the Saturday Evening Post, outlined his argument favoring a downward revision of taxes as the logical means of improving business conditions.

What Mr. Mellon says about the facts of Government can be accepted as the truth, says Mr. Lawrence. Differences of opinion there may be as to the remedies he proposes, but as to the diagnosis of what is happening under the present system of taxation no one can speak with greater authority.

The secretary was warned by the politicians that he must not raise the question of tax reduction this year because the radicals would press for a program so extreme that it would put the Administration in power on the defensive. He still didn’t understand how that altered his obligation to say that if conditions continued favorable the Treasury would be receiving annually $300,000,000 more than it needed to meet its obligations, and that this surplus should be used to reduce the burden of taxation on all the peoplein other words, that the country could either permit government expenditures to grow and thus keep on paying the present rate of taxes or else keep expenses down and enable the taxpayers to retain more of their earnings for themselves.

Mr. Mellon contends that the development of the business of the country is being held back by unsound taxation, that costs of production and the cost of living are being swollen by the tax burden, that the farmer is bearing a burden of taxes directly and indirectly which are eating up his margin of profit, that even the rebuilding of Europe is being held in check by the high rates of interest being charged foreign people for their borrowings on this side of the Atlantic, and as a consequence foreign exchange is upset, that nearly 6,000,000 taxpayers with incomes ranging from $1,000 to $5,000 a year are being forced to give of their earnings to the Govern ment in larger share than would be necessary if the confiscatory surtax had not eaten away initiative in business and induced taxpayers to avoid investments on which the Government could collect a substantial revenue, and that a large a measure of relief would be given to all classes of people, particularly the wage earners, by adopting the Treasury’s recommendations for tax reduction all along the line.

Mr. Mellon, continuing his discussion of the problem of taxation, says: “The usual argument in favor of high surtaxes is that people should be taxed according to their ability to pay. But in practice that theory has its limitations. History has shown that there always is a point of diminishing returns beyond which taxes cannot be pushed, if the revenue receipts are to be maintained. In wartime it is at one point, in peacetime at another, for if the tax is not productive of revenue the whole purpose of the tax is lost. Taxes cease to be productive when they are oppressive, and this results in so many different disturbances to the economic life of our people that high living costs, decreased opportunities for everybody and other ill-effects are bound to follow.

“Indeed, the subject of taxation cannot be viewed as affecting only the incomes of the 7,500,000 income-tax payers.Taxes are inseparably interwoven with business conditions and business development. They are ultimately felt by the consumers—the entire 110,000,000 people in America.

“So in framing a tax law we should not be so solicitous about particular groups of individuals as we should be of the benefits to the country as a whole. The burden falls on all the people, and in developing its plans for tax reduction it' has been the Treasury’s effort to distribute the benefits directly over all classes of taxpayers, and at the same time indirectly to give the utmost possible encouragement to constructive business development. There is no satisfaction in a tax law which doesn’t get the revenue and at the same time actually retards business development. It is an axiom that you can’t force a man to work against his will. Labor insists upon its right to quit work whenever a wage commensurate with effort is not forthcoming. So also it can be taken for granted that capital will not work if the return is not worth while.

“The condition of affairs we have to-day is one in which capital is not working and producing revenue as it should. What really happens is that taxpayers so far as possible put transactions into a form that will not yield taxable income, because otherwise too much of the income to be derived would have to be given up in taxes.”

Mr. Mellon admitted that much of the money ordinarily invested in securities of a productive kind, is being invested in non-taxable bonds, that to a large extent

are non-productive. “But,” he continues, “even this is not so dangerous to our economic system as the ill effects of a wrong theory of taxation on the everyday transactions of modern business.

“People of means are not finding it worth while to invest their money in things that are taxable, and as a consequence the people of smaller incomes must keep on bearing a heavier burden than would be the case if more revenue could be collected from business. And when a thing is economically unsound it is bound to produce such' a result. The effect, of course, is not merely upon the people of. means. Unfortunately it bears down on everybody else. The people who have these high surtaxes to pay cannot be persuaded to put their money into productive business investments. They build no houses to rent because it isn’t financially worth doing. Consequently the housing ■ shortage remains and the rents on old houses are up. You cannot restrain the natural flow of money without impairing the very structure of modern business.

“The practical answer is to bring the surtax rates down to a point where it will become worth while for the investor to put his money into productive channels instead of buying tax-exempt securities.

“This question of taxation, you see, is not merely a matter of the revenue for the Government for this particular year. It is something more than that. The business of the country—indeed,_ the prosperity of this country—is vitally related to sound taxation methods.”

One of the most unfair features^ of our present tax law is the failure to distinguish between earned income, and income from investment. I sincerely trust that my recommendation on this point to reduce taxes on earned incomes may be approved by the Congress. It would mean much to millions of deserving American workers.

“Surely we can afford to make a distinction between the people whose only capital is their mental and physical energy and the people whose incomes come from investments. In the one case the income of the man who works with his brains or with his hands is uncertain and limited in duration. It may at any time be interrupted by sickness or terminated by death, and old age can be counted upon to diminish it. In the other case the source of the income continues. It may be disposed of during a man’s life and it passes to his heirs at death.”

“What do you anticipate would be the effect during the year 1924 if it were believed that a tax bill along the lines of your recommendations would be passed?”

“There would be an immediate effect on business,” concluded Mr. Mellon. “People would have more confidence in the future. They would be able to plan expansion. Capital would flow more freely. Take the salaried man, the lawyer, the doctor, the skilled mechanic, the laborer, or any man or woman who earns money without the use of capital. Suppose our proposition is put into effect. Such a taxpayer would get a 25 per cent, reduction. Knowing that he or she will have to provide less money with which to pay income taxes in 1925 and thereafter, the buying power of that class of people will immediately be increased. They can live at a higher standard. They have that much more _ money permanently to live on. It raises the standard of living, makes a greater permanent buying power in the country and releases capital for productive purposes so that we should have an era of unprecedented prosperity.” 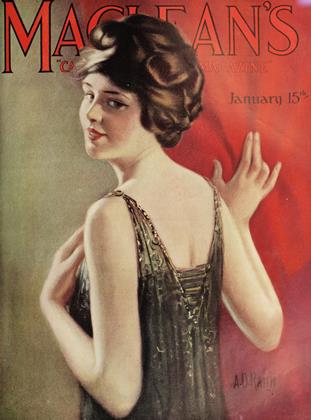