OUR DOLLAR’S RETURN TO PAR MOST COLORFUL ITEM OF OUR ECONOMIC RECOVERY J. HERBERT HODGINS October 1 1924

courses of our economic rehabilitation, the average Canadian to whom the intricacies of foreign exchange will always be mystifying, has experienced a distinct “kick” from the Canadian dollar’s return to par on the New York money market. Probably no single episode in our financial recovery has been of such broad interest throughout Canada; for there were individuals who accepted it as a personal grievance that the Dominion’s currency should be subject to discount outside of this country. Particularly was this the sentiment in those early months, of what became a protracted period, during which the Canadian dollar was carried eventually to its extreme discount of 19¼ per cent, in December, 1920.

A month ago .when the Canadian dollar again returned to par, it was heralded in the daily newspapers as achieving the peak point of international currency, all of which was distinctly thrilling to the hoi poli, of course, but regarded as something akin to spectacular “bunk” by the bankers and financiers generally.

The average individual’s education in international currency has long been neglected in Canada; in fact until we were well entered upon the war period international exchange had seldom been of any serious moment to Canadians, except those professionally interested. It was not until we started across the border to visit our cousins in the neighboring republic that we began to experience the first practical reactions to “exchange” and then, when our dollar’s foreign value shrunk suddenly and swiftly in the business readjustment period of 1919, 1920 and 1921, an actual lament went up. Business men accepted the situation as a reflection of sound economics; it was at all times difficult, however, to get the average man on the street to divorce sentiment from his viewpoint. Few there were who recalled that immediately following the American civil war the American dollar dropped to a heavy discount in Canada.

“Many Canadians, who should have known better, blamed the Americans, because of the supposed profits which the Americans made out of the discount on our currency in the United States,” A. B. Barker says in his discussion of the rise and fall of New York funds in Canada.

Business men of the United States, in reality, were equally concerned—if not more so—in the restoration of our dollar’s status abroad. Because the more our dollar shrunk the less likely we were to continue buying American goods upon an extensive scale as we had been doing. Abnormal exchange reduced our buying power in the United States, and that deprived some American business interests ofwell if not their bread and butter at least their cake. Many American manufacturers in their anxiety to retain their Canadian customers sold goods at prices in Canadian money; meanwhile depositing the proceeds in Canadian banks. At one time these balances ran to such a considerable amount that they measurably influenced the exchange situation as between the two neighbor countries in Canada’s favor, obviously.

How was our dollar’s international status restored?

“The parity of its dollar is a reflection on Canada’s general prosperity,” in the words of Lord Beaverbrook, upon Lis return to England after a short midsummer trip to his native Dominion.

To-day, we find various reasons advanced to account for the Canadian dollar’s parity, in New York. It is attributed to our continued large borrowings in New York; to Canadian bankers’ withdrawal of funds held to their credit in New York, in anticipation of the coming grain movement; to increasing U.S. investment in this country; to the employment of surplus funds here by New York banks, because of the higher interest rates to be obtained; to the remarkable development of the “tourist trade,” which has brought substantial American money into the Dominion; to our growing export and lessening import trade with the U.S.; and, according to Wall Street gossip, to the active buying of Canadian funds by aggressive “bootlegging” individuals.

In the chorus of approval which has accompanied the dollar’s return to normal the Quebec Chronicle warns that “this recovery is mainly due to an artificial and temporary condition of affairs and not to any constructive policy, nor does it herald an early return to prosperity in the Dominion.” It is a dangerous course of reasoning, in the Chronicle’s view, to presume that because extensive foreign borrowing has strengthened the Canadian dollar that a policy of this sort can be carried on indefinitely. The real prosperity of any country is to be found in the productive power of its people, as the Chronicle further points out, and if the advance in Canadian exchange was due to these causes we would have reason to congratulate ourselves. Considerable of the financing which has been effected in the United States was designed for productive enterprises. In the first nine months of this year Canadian bond borrowing totalled $260,000,000, of which nearly $100,000,000 was secured in the United States.

The shipment abroad of the output of our industrial plants and the produce of our farms, and forests, and mines has been growing apace, and this development of our international commerce is unquestionably one of the soundest causes of our healthier finances.

“With the Canadian trade balance in so favorable a position the buying of new Canadian wheat just beginning and the United States’ investors turning to Canada,” the Financial Post feels that “exchange will be at or close to par for some time, with a possible premium over the U.S. dollar from time to time.”

The Toronto Globe regards the situation as temporary but considers that the “high quotations for Canadian funds in New York will he an added inducement to the acting minister of finance to float in New York at least a part of the forthcoming Dominion loan.”

The New York Times says dealers expect that the Canadian dollar will continue at par for a couple of months at any rate and that “one big dealer counting on the fact that October is the month when Canadian exchange is generally strong in New York anticipates a premium of an eighth during that month.” Such a premium is the profitable point at which bankers are usually induced to ship gold, as the cheaper method of exchange. 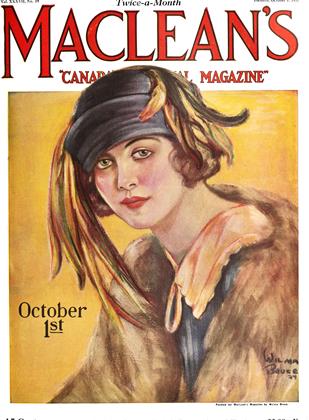