INSURANCE companies are not spending much time seeking women clients. Bitter experience has taught them that “go-getting” in the direction of the business girl is a waste of time, of printed circulars, of postage stamps and of aspirations.

“You horrid man! How can you suggest such a thing? I’m going to be married long before then,” the average young stenographer indignantly exclaims when old age protection in the form of a annuity is brought to her notice, and the canvasser, thoroughly cowed, does a quick vanishing act. Is it any wonder that women are considered a hopeless proposition from an insurance point of view?

But whether married or single, there is equal necessity for protecting the future. Do not statistics prove that only five persons out of every hundred are financially independent at sixty? The rest must either keep on working, or depend on others for support. As for the widows left with estates, with few exceptions they have within seven years lost their funds and become penniless.

Because women have proved such kittle cattle—so unwilling to be enclosed in the protective mesh of annuities and endowments— the companies have pretty well abandoned them as prospects. Their advertisements and circulars are written for the other sex. Consequently, a valuable means whereby all women might provide for their old age is brought but little to their attention.

Annuities are new in Canada; not until recently have they been sold to any extent. One reason for this is because there were so many good stocks that paid a high rate of interest. But since money is now cheaper, it costs more than formerly to buy gilt-edged securities. Then an annuity offers greater protection. Not only does it mean a sure income, free from taxation, but in some forms it gives a certain measure of insurance against disability, as well as dividends under a profit-sharing plan.

It is now sixteen years since Canadian government annuities came into existence.

In fifteen years more than six thousand persons have taken out contracts, and have paid into the fund over eight and three-quarter millions of dollars. By changes in the Act, made in 1920, an annuity up to $5,000 may now be purchased on a single life or on two lives jointly. The age limit, which was formerly fifty-five years, has been abolished, and an annuity may now be purchased to begin at any age after the age of five. All expenses of administration are borne by the Government.

Among women buyers of annuities, school teachers lead, there being more than three hundred of them. Next in numbers come domestics and housekeepers—which include married women— 216 altogether. Then there are 100 stenographers and secretaries and 79 trained nurses, while missionaries and students are set down as respectively 55 and 53, although probably not all of these are women. Other occupations represented are, dressmakers 23 ; deaconesses seven ; librarians seven ; hairdressers one; beauty specialists one; dietitians two; designers one; and lady’s companion one.

THE younger the age at which the purchase of a deferred annuity is made the smaller will be the premium to be paid. That is why a Winnipeg bank manager, having seen so many women left without means in their later years, determined early to protect the future of his two little daughters, aged five and seven, by buying each a government annuity, for which he pays $50 and $54 a year respectively. These payments being kept up until each in turn arrives at the age of fifty-five, insures that from that time on, as long as life lasts, each will receive $600 a year. If one should live to be ninety—and this would not be incredible, she will have drawn $21,000 from the Government in return for $1750 paid in. Because a woman’s chances of long life are considered greater than a man’s, the rates for women are slightly higher than for men of same ages.

An^ engaged girl cannily asked her fiancé if he would be willing to keep up the payments on a government annuity she had taken out, which amounted to something less than $20 a month. He willingly agreed and, should ill winds blow upon them in the future, the $50 a month may benefit him as well as her. Married women would do well to draw to the attention of their husbands such a provision, which does not depend on death for its benefits.

There is one form of annuity, however, which is also life insurance, such as a secretary in a large concern has taken out. He pays $50 a month to a Canadian insurance company; if he should die, his widow would receive $100 a month for life.

Illustrating how this worked out in one particular instance is the case of a man of thirty, who left his small home town to go to a city hospital and have a minor operation on his throat. Very unexpectedly he died. His business being hardly started, he left no property. Two years previously, however, he had taken out a policy for which he paid $300 a year. As time went by, and neighbors and local gossips saw the widow evidently managing all right, they were mystified as to how she did it. They did not know that her husband’s investment of $600 had given her $50 a month for life.

BY THE provisions of the will of a substantial Eastern manufacturer. Government annuities were purchased for his wife and two daughters. Although he also bequeathed them each an income from stocks, he explained in his will that these might in time depreciate in value, while a government annuity was absolutely safe and non-taxable.

A widowed mother living modestly in the country required one of her three daughters to be with her. The youngest, married and in a distant city, could not be considered. So the choice lay between the others, a dietitian and a stenographer. But the business girl disliked domesticity and was not adaptable, so the trained housekeeper was the one called upon to make the sacrifice.

“If I give up my good position and get out of touch with the business world indefinitely, what will become of me in my old age?” asked the girl, who was then thirty-two. The mother felt the force of this question, and after consulting her lawyer, decided to take out a government annuity of $600 a year for her daughter, to start when she became fifty-five years old. This called for an annual payment of $171 for twenty-three years, which works out at $14.25 a month, a sum she could manage without inconvenience. Should the mother die during the ensuing twentythree years, the payments are to be continued out of her estate.

There are many daughters in Canada who, year after year, patiently take care of elderly parents and nurse them to the end, so thus are cut off from all chances of forging ahead in business or of marrying. Late in life many of them are cast adrift, to struggle for their livelihood in a world that calls for young people.

A husband and wife living on a fruit farm, where they always expect to remain, have taken out a government deferred last survivor annuity. The wife is twenty-five, the husband thirty-one. Thqy pay $126 a year, or $10.50 a month, and when the wife reaches the age of fifty-five—in thirty years—an annuity of $500 will be paid until the death of the last survivor. If both should die before the first instalment of the annuity became payable, all payments, with interest at four per cent, would be returned to their heirs.

IN ONE Canadian company the annuity carries other benefits as well as a sure income. If a woman while buying her annuity became disabled through illness, such as rheumatism, neuritis, tuberculosis, or because of an accident, she at once begins to draw the annuity. Even if she has made payments for only one year, she is entitled to this income for life.

If a woman, after paying towards an annuity for five years in a certain company, should change her mind and want her money back to make an investment, íe would not only receive it all back, but ith three per cent, interest. This is died a cash option: Government inuities do not provide for this conngency.

Sometimes it is capital that is needed ithin a certain time. A trust company had s its clients two school teachers who were uying a house. They had enough money ) make the first payment, and then signed mortgage whereby they agreed to pay 3,000 cash in five years. To be able to ïeet this indebtedness they started to ay between them $43.44 a month into he company. In five years they received -ack $3,000 in cash, and got the title to heir house.

A woman on a good salary but doing iard, wearing work, decided she must get ogether some capital and go into the tea oom business. As she was an easy spenler, she found it hard to keep her bank iccount intact. So she has arranged to >ay $101 a month into a trust company, in five years’ time she will receive back 57,000 in cash. 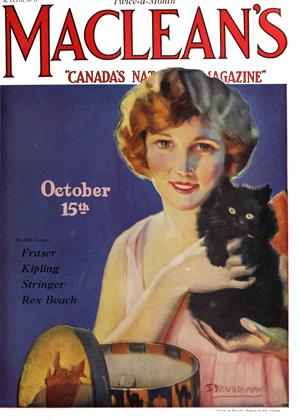