EAST and West, the Dominion’s twenty-ninth banking consolidation has been accepted with a wider equanimity than any bank merger of recent years. Indeed there is a broadening disposition to regard the Standard-Sterling amalgamation as the forerunner of further banking arrangements which will tend to reduce the number of chartered banks beyond the present “unlucky” total of thirteen.

Five years ago a public clamor attended the suggestion of banking mergers. To-day the tenor of the public mind across Canada appears to be summed up by the Hamilton Herald's philosophy, “concentration of bank capital means increased strength and strength begets public confidence, which is a necessary condition of sound business.”

This much, it would appear, the Merchants Bank debacle and Home Bank collapse have taught the public!

It is just possible, however, that the present public calm may be the prelude to political storm. “The StandardSterling merger is sure to have a political reaction,” declares The Financial Post. “The Progressives and Laborites will point to this as another evidence of the concentration of banking resources, and there is sure to be another strong demand for control; there is no use shutting one’s eyes to this fact.”

J. S. Woodsworth, M.P., for Central Winnipeg, gave hint of this, too, when speaking to the Regina branch of the Canadian Labor party he stressed the need for “watt hing the concentration of financial power in the hands of a few groups.”

AS A business development the latest - merger is regarded as a natural concomitant of present day methods. “Big business is the order of the day,” as the Montreal Gazette points out, going on to explain: “In manufacturing and

trading, in transportation and production, the trend is towards large corporations, not for the purpose of monopoly, but to reduce overhead cost by increasing quantity production. In a sense, although the cases are not quite analogous, banks derive advantage from amalgamation and concentration of resources, strengthening their position and cutting somewhat costs of administration. At one time there were thirty-eight chartered banks in Canada; with the union of the Standard and Sterling there are now only thirteen. No orte, however, will contend that banking facilities have been reduced by this process of extinction, nor that the stream of credit is shallower. Canadian banks were never so strong, the financial structure of the country never so firm as now, and this because their basis has been broadened and their resources concentrated. The business of Great Britain is carried on by five banks, and there is no monopoly of cash or credit nor any lack of accommodation to deserving borrowers. While the number of parent banks in Canada has grown smaller, the number of actual banks has actually greatly increased. As recently as 1905, less than two decades ago, there were 1,145 branch banks in Canada; now there are upwards of 4,400, or four times as many; and each of these branches more thoroughly serves its community than does the unit bank in the United States.”

F. W. Cowan, one of the Standard Bank’s directors, in an interview with the Oshawa Reformer, stresses the fact that “The tendency of the times in finan-

cial circles is towards larger institutions which, with command of greater resources and a wider field of operation, are in a position to take advantage of the expansion of business as it is warranted, and with a reduction of overhead and other expenses.”

The St. Catharines, Ont., Standard admits the present day tendency toward concentration and is willing to commend the move “if it brings down the high cost of banking,” but of this the Standard confesses scepticism.

England as a Pattern

IN SOME directions Canadian bankers are accused of planning a banking structure more definitely like England’s present system, where the number of individual banking corporations has been reduced to five or six. The Regina Leader is not in accord with this possibility. “The banking system that has been developed in the United Kingdom is unquestionably sound and well adapted to the needs of its clientele,” comments the L-ader, “but it does not necessarily follow that a servile imitation of that system is adapted to the needs of a farflung and rapidly growing country like Canada.”

“This country does not want and will not stand for three or four monopolistic and non-competitive banks,” in the opinion of the Vancouver Sun. “But neither can we afford to maintain fifteen of twenty banks. What is wanted is a sufficient number to guarantee competition. Our existing banks could with ease and economy be consolidated into six or seven groups, each equipped with five or six really worth-while men of executive ability.”

If the Finance Minister were to put some such plan as this into effect, the Sun believes that “this bank consolidation should be followed by a Government announcement that, in future, the security of bank deposits will be Governmentguaranteed, just as note circulation is to-day guaranteed. It is just as easy and just as simple for the Government to guarantee deposits as to guarantee note circulation. And Canadian business, Canadian finance and Canadian depositors can stand the cost of guaranteeing bank deposits a whole lot better than they can stand the cost of another bank failure.

“The announcement of a reorganization and consolidation of Canadian banks, coupled with an announcement of government guarantee of deposits, will restore confidence and put new life into the business of Canada.”

The Toronto Star is in accord with the merger of the Standard and Sterling banks as a move “that will tend toward more economic operation.”

“The ends of efficiency would perhaps be best served by creating a single bank out of the thirteen which now remain,” the Saskatoon Phoenix concedes, but with characteristic western feeling adds, “but this objective cannot safely be approached without a steady enlargement of the state’s supervisory functions.”

' I ' H E Financial Post points out that A increasing competition from the greater banking corporations has made progress extremely difficult of recent months for the small, individual banks to retain their separate identities. Citing concrete evidence of the business prob* lems of the smaller banks, even more particularly in the past year, the Financial Post says: “An examination of the bank returns as made to the Government shows that both the Standard and Sterling banks have felt the contraction of deposits that has been experienced by the smaller banks, generally, during the last year. In July, 1923, the Sterling had demand deposits totalling $3,295,518 and notice deposits of $11,372,793. In July, 1924, these had declined to $2,872,429 and $8,878,396 respectively. In the case of the Standard the demand deposits in July, 1923, were $15,924,133 and the notice $43,122,679; but in July, 1924, they were $13,822,359 and $33,667,000 respectively.

The Manitoba Free Press admits the difficulties through which the smaller institutions have been passing but is disposed to believe that “with the banking reform that is being brought about and the real, not merely formal, inspection in the interest of depositors, the element of security and confidence in the banks in general should be restored and the small banks should be able to carry on and to resist the tendency towards concentration.”

A return of a feeling of security in the general banking situation, the Free Press argues, should enable the small banks to regain their position and bring a counter movement of decentralization. A reverse movement to the banking concentration, in the Free Press' opinion “would be in the interests of a country like Canada with an immense area and awaiting a diversified development.”

This keynote is developed by the Regina Leader, which advances the creed that, “Canada’s system of chartered banks is too rigid to serve properly anything but the country’s commercial interests; and it has the additional defect that its development is all in the direction of further concentration and rigidity.”

THE Leader advances the suggestion that “as far as the West is concerned, a satisfactory solution of what has become a real problem for this part of the country would be the creation of a system of rural credits sufficiently flexible to meet the requirements of the agricultural industry. A few years ago most of the leading bankers w’ere inclined to oppose the establishment of a rural credit system, as unnecessary and unsound; but many of them now appear to have changed their minds. The agriculturists of the West have no desire to weaken the present banking system. They realize that it is efficiently serving the commercial interest of the country, which it w'as designed to serve. What they do desire is the creation of a system of intermediate credits between the short term commercial loans made by the chartered banks and the long term mortgages granted by the loan and investment companies. Amalgamation and absorption of chartered banks would cause neither apprehension nor criticism in the West if a satisfactory system of rural credits were established.”

The Toronto Telegram definitely names E. R. Wood as the practical mind behind the Standard-Sterling consolidation, and further intimates that Mr. Wood will be the financial genius of the more powerful organization yet to be evolved by the process of further mergers. “Now that the news is out, chief comment is whether or not another merger will follow, going likewise into the same hands,” questions the Telegram, continuing, “at the moment it looks as if such were on the tapis, for the suggestion is made that the new concern

will apply for letters patent as _ the Standard-Sterling Bank! This name is so cumbersome as to appear to be an obvious makeshift, and the inference, therefore, is that the name may be just a stop-gap to fill in for the time being until an even greater merger is completed.”

The Record of Bank Mergers

THE Standard-Sterling amalgamation, as a matter of Canadian banking record, is interesting as the twenty-ninth in a period of fifty-six years. In this time, the Bank of Montreal, commencing with the Bank of Yarmouth’s taking over in 1903, has absorbed six institutions: the Canadian Bank of Commerce likewise has absorbed six other banks, its latest “takeover” being the Bank of Hamilton, which merger went through last year, although a few years prior, so strong was the, public outcry that the Royal Bank’s attempt to secure the Hamilton institution was denied the Finance Minister’s sanction, and the merger attempt had to be abandoned. The Royal Bank of Canada has been the principal in three consolidations; curiously enough the banks absorbed represented “sectional” institutions, successively banks of the maritimes, Quebec and the West. The Bank of Nova Scotia has absorbed since 1883 four other banks. The present development is the third merger in which the Standard has been a principal, previously taking over in 1875 the St. Lawrence Bank, and in 1909 the Western Bank of Canada. The Imperial Bank and the Union Bank of Canada have each been concerned in one merger, the former as far back as 1875, when it absorbed one of Canada’s earliest institutions, the Niagara District Bank. Two of the French-Canadian banks, Provinciale and Hochelaga, have also each been principals in one consolidation, the former taking over La Banque Jacques Cartier in 1900 and the latter absorbing the Banque Nationale early in the present year. 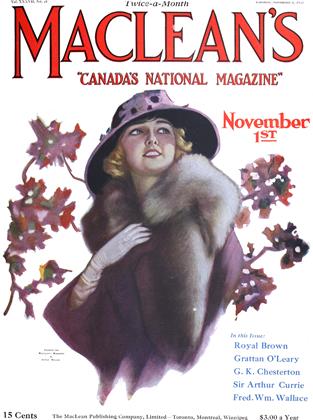