Has League Been a Success? NEW YORK TIMES February 1 1924

REPRESENTATIVES of thirty nations have answered the following questionnaire sent out by the New York Times.—-

1. Has the League of Nations justified itself by its work thus far?

2. What can the League do in the future toward abolishing or lessening war?

3. What changes, if any, should be made in the League organization or methods of procedure?

4. Why should the United States join . the League?

5. What can the Permanent Court of International Arbitration do toward bringing peace to the world?

The answers indicate a widespread conviction that the League is in fact a powerful machine for peaceful settlement of international difficulties and has abundantly justified its existence, but that its machine can function effectively only when the great nations formally participate in the League and in the Court and actually employ them as agencies for handling their international troubles.

Minor changes in methods of procedure are generally advised; but the chief reform urged is a liberal interpretation of Article X, which reform, it will be noted, is particularly stressed by Sir Lomer Gouin, of Canada.

Excerpts from what the Times refers to as “characteristic replies” are as follows: Professor Gilbert Murráy, Great Britain: The Permanent Court of International Justice is both administering law and creating law. Law is the alternative to war. Many wars have occurred simply because the nations had no law to appeal to. In time, this court will be the natural arbiter of disputes between governments, just as the national law courts are now the natural arbiters of disputes between private citizens.

Constitutions are generally built up on precedents and long experience. One or two articles of the League covenant, such as Articles X, XVI and XVIII, need interpretation or working out in detail. But no sweeping changes are desirable in the covenant.

Henry A. Rollin, Belgium: What is it that we ask of the United States? It is not true that we want to use her wealth or her men. What the League of Nations needs is not so much troops or money. What the League needs is truly independent men, who are determined to carry out impartially the purposes of the League, and who have that degree of political influence which can come only of being the representatives of a powerful nation, like the United States, which is sincerely committed to a policy of fair dealing. How often and how quickly in these last four years the presence of representatives of the United States would bave done away with doubts and equivocations and put an end to hesitations!

K. Hjalmar Branting, Sweden: It is my conviction that if the League had not been in existence the situatibn in the world to-day, and especially in Europe, would have been still worse than it is. The influence that the League exercised in obtaining a peaceful settlement of the Greco-Italian conflict was of greater importance, I think, than the world in general suspects. The concentration of public opinion through the assembly at Geneva contributed vastly to the result attained.

Nicolas Politis, Greece: The Permanent Court of International Justice can function only very indirectly to preserve the peace of the world unless its jurisdiction is enlarged and unless the governments acquire the habit of submitting their differences to it more and more.

Gabriel Hanotaux, France: The results already attained in the rehabilitation of Austria under the auspices of the League

of Nations constitute an extraordinary achievement. In view of the rapidity with which these results have been attained they may be considered as unique in history. A large share of credit is due to the Austrian government and people, and especially to the Chancellor, Mgr. Seipel. We must also thank the banks throughout the world—not forgetting America—who have furnished the money and have shown that they trust Austria.

Joseph Barthelmy, France: Article X is an essential and fundamental part of the constitution of the League of Nations. France would prefer that there should be neither amendment nor interpretation. If she accepts an interpretation it is because new facts have risen. Last year the Canadian delegate said: “It is not our

intention that our proposed amendment to Article X should facilitate the longexpected entry of the United States into the League of Nations.”

Viscount Ishii, Japan: Gradually but surely the League is progressing toward the day, which may still be distant but which will certainly be reached, when both in competence and in effective authority it will be adequate for the great work conceived for it by the authors of the covenant.

Tcheng Loh, China: The activities of the League have been extended to the Far East. A commission of the league has recently been there to make a scientific inquiry into the spread of epidemics and the best means of combating them. It can no longer be said that the league confines itself to academic discussions and the passing of platonic resolutions.

The adversaries of the league, who but yesterday rejected the very idea of a League of Nations, now recognize that it cannot be ignored in the world of to-day. I am firmly convinced that in the near future, perhaps a nearer future than we expect—every nation in the world will join as a regular member of the League.

Afranio de Mello-Franco, Brazil: The principle of legal equality of sovereign nations is sanctified by the statutes of the Permanent Court of International Justice. It is the cornerstone of international law. To this principle the world owes the existence of this court, which is the offspring of the covenant of the League oi Nations. The actual establishment of the Court marks the greatest advance yet made in the evolution of law and in the development of justice between nations

Albert Mensdorff-Pouilly -Dietrichstein, Austria: The success of the work undertaken by the League on behalf oi Austria will ever be a glorious chapter in the history of the league; while the history of Austria will contain a chaptei devoted to her gratitude to the League ol Nations. The league has clearly shown thí world that when it undertook to put inte effect a scheme which it had founded upor common sense and reason, it was able tc carry out that scheme with success, and tc obtain practical results.

We still have many difficulties to overcome. But the Austrian government, wit! the full support of the Austrian people will continue to carry out the restoratior and financial re-establishment of oui country in accordance with the prograir and the intentions of the League ol .Nations.

Sir Lomer Gouin, Canada, who recently resigned as minister of justice Three successive Governments of Canada with different political programs, have been agreed in asking that Article X should be modified. I think it is clear thaï Article X must be modified, at least in its drafting, in order to make its scope per fectly clear or to give it the interpretation which it should bear. Sooner or later thi: article will have to be interpreted, and ii my opinion it is preferable that this shoult be done in time of peace.

The objection has been raised tha interpretation is dangerous. Howeve dangerous it may be, it is less dangerou than the ambiguity of Article X: It i

argued that Article X is of fundaments; importance; indeed, it is the very justifici tion of the league’s existence. For this ver reason Article X should be made as des as possible. 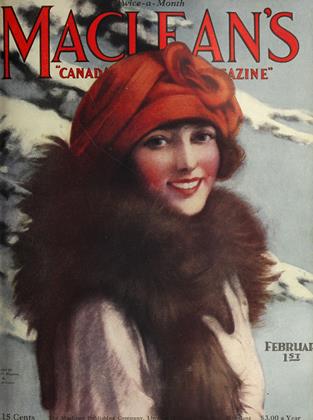