ANSWERS TO FINANCIAL QUERIES May 1 1924

Question—What is your opinion of Camaguey Electric first mortgage bonds? Would be obliged for any information you have regarding this company.—J.B.V., Hamilton. Ont.

Answer—Camaguey first mortgage bonds are considered good and may be approached with confidence by the investor. For the fiscal year ended December 31, 1922, Camaguey Electric showed net earnings of $352,200 available for bond interest and depreciation. The company has been taken over by the General Electric interests, and the property is now in control of the Electric Bond and Share Corporation, and under the management of the American and Foreign Power Company. These are general electric companies, the one being a holding company and the other an operating and managing company for the various General Electric utility interests. Camaguey Electric serves the City of Camaguey, Cuba. Control has hitherto been vested in Montreal interests, associated with the Royal Securities Corporation.

Question—Would you kindly favor me with your opinion of Canadian General Electric? I own some preferred stock. —A.V.E., Winnipeg.

Answer—Canadian General Electric has a particularly good record as an industrial stock. The volume of sales for 1923, as compared with 1922 was ven much larger, according to the annual report for that year. Conditions in the electrical industry are very much better than they have been since 1920. There is evidence of increased buying power and new uses for electricity are being introduced. Many large installations of generating equipment are in progress and many more are in the initial stage of construction. As these come into use, there will be an increased demand for distributing material, followed in turn by demand for motor and accessory equipment, wiring and lighting supplies, household appliances, etc., so that on the whole, the prospects for Canadian General Electric are brighter than they have been for some time. According to the 1923 report Canadian General Electric didnot fully earn the common dividend, though the net for the year was a material improvement over 1922. Before depreciation and interest were provided, the total stood at $1,482,234 compared with $532,791, an increase of $949,443. Out of this sum $400,000 was set aside for depreciation, while no allowance was made for the year previous. Interest and exchange charged was $404,151, compared with 1922 figures of $428,227. The 1923 net was $678,083 compared with $101,564. The surplus at the end of 1922 was $6,820,411—thus there was $7,498,494 available for distribution.

Question-What is the present position and prospects of the Premier Gold Mines? Do you think the dividends can be maintained? —L.M.W., Vancouver.

Continued from page 3 Carried on satisfactorily, and new bodies of ore have been revealed, though of Lower grade than the ore formerly encountered, and which went most of the way in building up the mine’s'earning power. The zone of secondary enrichment, which accounted for the high grade ore, apparently does not extend much below the 300 foot level, and at the 400 foot level the ore has been found to assay at about the average value of gold and silver properties in British Columbia— approximately $6.40 in gold, and $3.20 in silver to the ton. The future of the Premier mine is believed to lie in the development of the secondary ore, which is expected to extend to a depth and width considerably more extensive than has so far been prospected.

Question—I would greatly appreciate any information you can give me regarding Western Homes Limited, Winnipeg. Does the company conduct its business on a conservative basis?—S.P.W., Brandon.

Answer—The Western Homes Limited , is a young mortgage company placing loans on improved farm property in good districts, and on moderately priced city homes. The business appears to be conducted along safe lines. During 1923 the sum of $143,220.12 was collected on mortgage accounts, an increase of $30,549.28 over the previous year. The profits for 1923 and the undivided profits brought forward, totalled $73,215.11, of which $46,205.07 was required to the seven per cent, dividend and income tax. A balance of $27,010.04 was carried forward to surplus. The total subscribed capital is well over two million dollars, and the average paid-up capital at December 31, 1923, was in excess of $600,000. The sum of $125,561.99 was added to the assets which now stand at $780,285.40. Deferred profits for the year stood at $40,001.10, and premiums in course of collection totalled $180,511.03 Organization expenses were reduced by $2,000. The company is making good progress and is conducting its business carefully and economically. The directors of the company are as follows: M. W. Argue, W. Redford Mullock, K.C., D. J. Dyson, W. O. Jefferies, Malcolm Mclnnes, Edwin J. Brownlee, W. A. Bremer, and Benjamin C. Parker.

Question—More than a year ago I bought some preferred shares of Federal Discount, Toronto. No dividends have been paid so far. Can you give me any information as to the company’s standing? —F.D.B., Halifax, N.S.

Answer—Recently the Federal Discount was taken over ffy Consolidated Discount, Toronto, the shareholders to receive one and a half shares of common stock of the new concern for each share of preferred held in the old. According to W. A. Morse, general manager, the exchange will be made as soon as a certified list of the Federal shareholders is secured. Consolidated Discount is a new concern which deals in first and second mortgages and commercial paper. The success of the company will depend largely on management, especially at a time when risks are even greater than is usually the case. Your stock in the new company is now common and it will be some years before you can hope for any returns. 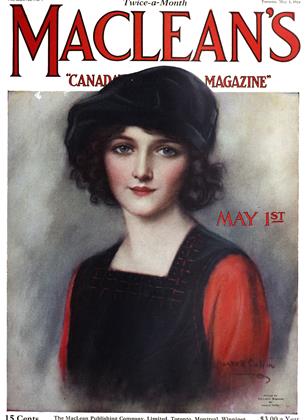