DR. CLIFFORD A. TAYLOR, an optometrist, born—and now practising—in Toronto, may rightly be called a successor to Aladdin’s wicked pseudo-uncle, who offered to supply “new lamps for old,” in order to gain control of the miraculous geni attendant upon Aladdin’s miraculous lamp.

For Dr. Taylor is the only man in Canada who possesses the secret of making glass eyes. In Victorian days the eye was a window of the soul; to-day, more tersely but equally picturesquely, it is a lamp.

Although there are no authoritative figures available it is estimated that not more than one-fourth of the population of Canada has normal vision, and that there are 14,000 men, women and children who are blind either in one eye or both. Of this number approximately 3,000'are war casualties.

Thus there is plenty of scope for Dr. Taylor’s unique profession. His skill and knowledge were first placed at the disposal of the Department of Soldiers’ Civil Reestablishment so that the war casualties would have first call upon his services.

The secret of making artificial eyes is one which has been jealously guarded, and in the United States with its 110,000,000 people there are only four men who possess this knowledge. And these four are all related! The famous Gugelman of New York, a son, a brother and a nephew keep their skill entirely in the family, and it was not until Dr. Taylor had perfected his experiments as the result of years of study that he set forth, armed with a letter of introduction from the Department of Soldiers’ Civil Re-establishment, and the two met. Then, because the Canadian was able to demonstrate that his experiments had been successful, they compared notes to some extent with, one can readily believe, mutual benefit.

These five men do not, however, supply all the artificial eyes for the North American continent. From their laboratories—or studios?—only “tailor-made” eyes issue, and many eye casualties are content to be fitted with “stock” eyes.

They are made in seven standard colors and each color range covers a probable ten shades. The importance of these colors forms an index as to the proportion of different shades to be found. They are, in order of frequency, Bluegrey, Blue, Brown, Grey, Hazel,

The making of an artificial eye is a simple matter. Melt some glass to the right temperature, blow it into a bulb, shape it, cool it and paint on the general base color, cool it again and paint in the pupil, the iris and the little red capillary vessels—and the job is done!

Of course, every detail of the eye must be exactly in position both in relation to itself and to the remaining natural eye. Variation by so little as a millimeter is sufficient to spoil the eye. Further, using cylinders of colored glass as pigments it is necessary to paint an exact replica of the eye to be matched. There is no method of measuring size and distance and while the glass is in its molten state the eye of the artist is the only micrometer.

An unerring—almost daring— skill is a prime factor of the successful eye manufacturer.

Dr. Taylor obtains his glass in long, hollow tubes about an inch in diameter. This glass, highly refined and milky in color, is used as the foundation. Other tubes of smaller size supply the colors for painting in iris and pupil, and the only other prerequisites are a blow pipe which controls the gas flame—Dr. Taylor has invented one which will cut a pinhole in a hollow tube—an accurate eye and good lungs.

Taking a tube of glass in his hand, the operator first heats it in an intense flame until it is in a molten state. He then draws it out into a tube about one-sixteenth of an inch in diameter and seals the large end which he then blows into a bulb. This bulb is then heated and flattened so that the base color may be added. When this is complete the iris is painted on. Here the artistic side is uppermost as the colorá have to be mixed just as a painter prepares his pigments on a palette. Suppose, for instance, that the eye is to be blue-grey. First the proportion of blue to grey must be decided. Then solid sticks of blue and grey glass are twisted together, reheated to a molten state and painted on the orbit.

After this comes the pupil and the semi-ready eye is treated to a thin coat of transparent glass which gives a semblance of depth to the model. Veins are then painted on to match the appearance of the remaining

eye—and the thing is completely done.

To prepare veins two kinds of glass are used, a very thin stick of ruby and a fine tube of transparent. The ruby is inserted into the tube and the two fused together so that when the vein is spun out to a hair’s breadth and applied it has the look of being in and not on the cornea. An eye-maker must not only have an eye for color but he must be able to visualize the color when the eye is placed in the patient’s socket as the translucent glass, when held to the light, is several shades lighter than it appears in place.

Occasionally it is necessary to make eight or ten eyes before an exact match is achieved.

It is chiefly with the three thousand soldier cases that Dr. Taylor is concerned, and many of these are not yet making use of his services because they had been outfitted with stock eyes before his advent some three years ago, and, perhaps are not aware that they are now able to obtain eyes made especially for them.

During these three years some eight hundred cases have been outfitted at the laboratory at Christie Street Hospital. By a system devised by the doctor models for size and color are kept on file for each case so that it is only a matter of ordering by number when new eyes are required. But the doctor prefers actually to fit the eye if possible because he is anxious that each of his patients shall have an artificial eye so close in likeness to the real one that the difference is not apparent even to a close observer.

Before the advent of the eye-laboratory soldier patients to whom stock models could not be fitted were sent to New York and as the journey and fittings consumed about a week this involved an expenditure of about $125 each time. Now, at a considerably less expense, patients can be outfitted as often as required.

Each casualty for whom the Government accepts responsibility is supplied with two eyes at a time free of cost and may get new ones as often as necessary. The average is five eyes a year.

If you pay very much attention to your appearance you will notice that in the morning your pupils are small and that toward night they widen. If you wear a glass eye and the difference is marked you simply change as night draws on. Some patients are very particular with regard to their eyes and will keep a regular array on the bathroom shelf so that at all times the two pupils will match.

Two types of eye are used, shell and reform. The first is what its name implies and the latter is completely rounded. The reform has the shape of a rugby football which has been partially deflated and pushed inwards on one side so that it is convex on one surface and concave on the other. This allows the socket to retain its natural shape and permits perfect movement of the glass eye in conformity with the real one. The shell eye is used where the cavity will not permit use of a reform.

It is dangerous to wear the same artificial eye longer than six months. When it is worn for a longer period tears are apt to discolor and weaken the surface of the glass and the' result may be an explosion which will be unpleasant to the wearer if not actually dangerous. Two years ago a patient at Christie Street had such an experience and was rendered unconscious as a result.

The most particular people, Dr. Taylor says, are those whose business brings

as salesmen, business executives and actors. In a class by themselves are women, one of whom came all the way

from Vancouver to Toronto not long ago

for the sole purpose of obtaining a supply.

Glass eyes are useful at times. An overseer on a rubber plantation made a practice of leaving his in the fork of a

tree to keep watch on his black laborers

when his duties called him elsewhere,

It served this purpose well until one

black, bolder than his fellows, conceived

the idea of covering it with a tin can!

Dr. Taylor has made eyes for people

ranging from the traditional three score

and ten to a baby of four months. • Accidents and wars are not the only causes leading to the necessity of wearing

artificial eyes. Neglect contributes to a general weakness which may result in

ultimate blindness of the affected eye

which often must be removed by opera-

tion so that the other will not be sym-

The troubles which affect most eyes, in order of their frequency, are hyperme-

Babies are usually born with hyper-

metropia, or long-sight, and _ do not

develop fusion, or binocular vision, until

the fourth or fifth month. Thus it is not a sign of unusualbrilliancy when the

his eyes, but merely a sign that at last he can focus both eyes on a single object,

note of the things which seem to be

“hard on your eyes,” and keep your

Your eyes require'forty per cent, of

your nervous energy and if you allow

some other organ to get run down and

• thus use more than its share, a heavier burden is thrown op the most sensitive members. ' .

Constant vibration puts a strain on your eyes if you read on the train, as

they are forced frequently to change

their focus. This, however, is not the

case with one-eyed people, as they have

no longer stereoscopic or binocular vision.

It is not advisable to look out of the window of a moving train or other vehicle.

if it makes your eyes ache,

If the “movies” make your eyes ache,

you need to see a specialist,

If you read in bed, see that your light

not give your eyes any undue strain, If you boast that you have good eyes, take care of them, and remember that

when you are considerably older you

will want to do a lot more reading than 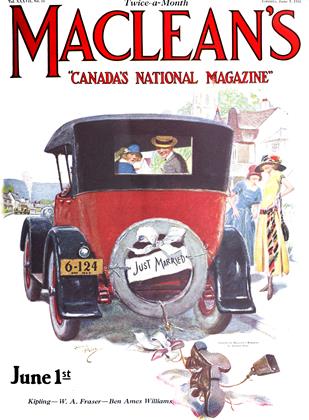