TRADITIONALLY, Canadians have found the Democratic party of the United States more sympathetic to their national needs and aspirations than the Republican party, declares J. A. Stevenson in an article on the American political situation appearing in The Canadian Forum. The reason for this, says Mr. Stevenson, is tHat “the ingrained protectionism of the Republicans has time and again appeared as a sort of boll-weevil on the relations of the two countries, and, moreover, Republican obscurantism _ has been the chief barrier to American participation in the league of nations.” He thinks, therefore, that a Republican defeat need arouse no grief in Canada, and a Democratic victory would offer more hope of an improvement in trade relations than a complete progressive success, “for the agrarian bloc in the west has lapsed into strange protectionist heresies.” Any upheaval would be better than none, he is certain, as it would “end the present unrealities of American politics,” and that “should be welcomed as offering a profitable example to ourselves.”

Mr. Stevenson recounts the recent scandals which rocked the very foundations of Republicanism, “a story of intrigue and corruption in the highest places” which is “astounding, and has shocked the conscience of the country in which political scandals are a commonplace.” For the managers of two historic parties, he says, these scandals “spelled grim tragedy,” and he comments on the after-effects as follows:—

The Republicans, as the party in office, felt the impacts first, and President Coolidge soon had his first real crisis to face. He handled it with amateurish clumsiness. Before him were two alternative courses. When the reputations of members of his cabinet were assailed and their resignation demanded, he could have stood by them, defended the leases, and earned the gratitude of the Republican machine whose chieftain, J. T. Adams, had already prescribed this course. Or he could summarily have dismissed both Mr. Denby and Mr. Daugherty and confirmed his repute as the stern guardian of the commonweath’s honor which his eulogists had depicted him. But he chose to do neither and embarked upon fatal paths of compromise.

At present the Republican!managers have not made up their minds about the renomination of President Coolidge. They are well aware that refusal to nominate him would be a damaging confession of failure which would impair the chances of any substitute nominee, but yet the claims of a number of possible substitutes are to-day being canvassed. Charles E. Hughes has the necessary national prestige and political experience, but in 1916 he proved a singularly unappetising candidate. Mr. Hoover has many strains of liberalism in his composition and appeals to the public imagination with his excellent record of varied service, but he is not popular with the average Republican politician and is suspected of a secret fondness for the league of nations. Gifford Pinchot, the governor of Pennsylvania, is a singularly attractive figure and has strengthened his prestige by his vigorous reforming career at Harrisburg, but, while he would attract just the very elements who would be repelled by a Coolidge candidacy, he is completely unacceptable to the conservative Republicans of the east who recall his close association with Roosevelt and discern no abatement of his radical proclivities. There are some other possibilities, but the Republican potentates apparently have determined for the time being to keep Mr. Coolidge as their first string. Yet if they discover that they cannot “sell” the silent son of Massachusetts to the American electorate, these highly practical persons will have no hesitation in relegating him to obscurity.

The Democratic party, after eight years of prosperity and power, came to overwhelming disaster in the election of 1920, and the hopeful vitality with which Woodrow Wilson’s idealism and political abilities had endowed it seemed to disap-

pear in a night. Parties, however, which retain so strong a nucleus as the Democrats do in the “solid south” may wane, but they do not die, and the reaction was not long delayed. Exceedingly heartening were the Democratic victories in the congressional elections of 1922, and, if they did not yield full control of either house, they restored courage and optimism to a party which had been reeling under a succession of disastrous blows. The alignment which resulted in both houses of congress effectually paralyzed the efforts of the Republican administration, and the Democrats began to discern clear hope of victory if they could secure an attractive and efficient candidate for the presidential contest.

When the semi-radical Roosevelt was the Republican candidate, the Democrats, angling for the vote of frightened Republican reactionaries, faced him with a firm conservative, Alton B. Parker, and subsequently brought back the radical Bryan to confront the conservative Taft. Following this tradition, a Republican nomination of an unbending conservative like Coolidge demanded for the Democrats a progressive candidate who could attract the votes of liberal Republicans. For this role, W. G. McAdoo, the son-inlaw of President Wilson and the former secretary of the treasury, seemed admirably fitted. It is true that by his attitude on patronage he had made himself unpalatable to many Democratic bosses, but he was the heir of Wilson’s political heritage, he could rely upon the powerful railway vote, and his unpopularity with “big business” was rated convincing evidence of his political liberality. The better elements in the Democratic party ranged themselves behind his candidature and it seemed to be prospering until the fatal Teapot Dome affair revealed him as the. highly paid legal satellite of the oil and other great capitalist interests. And although there is no suspicion of personal corruption and he has offered a reasonable justification of his position, yet it is plain that, if the Democrats are to get the full use of the political capital available in the oil scandal, they must abandon the idea of nominating a candidate who has enjoyed such a profitable connection with the oil interests as Mr. McAdoo has by his own admission. However, at the urgent request of his supporters, he is persevering with his candidature and will probably go to the Democratic convention with the backing of a larger number of delegates than any other candidate. His influence there ought to be the deciding factor in the final selection, about which prophecy is very difficult.

The Democratic bosses favor Governor “AÍ” Smith of New York. He is an honest and an able man and has proven himself an enlightened and efficient governor. But he is a Catholic, and there is an old tradition that a Catholic cannot be elected president of the United States. Even a liberal journal like the New Republic declares against Governor Smith’s candidacy on the ground that in view of the prevailing religious intolerance, as evidenced by the power of the Ku KIux Klan, his election would have the undesirable effect of pushing religious issues into the foreground of American politics and relegating to the background the infinitely more important economic problems. The objection seems valid and is equally applicable to Senator Walsh of Montana. ■John W. Davis, the former American ambassador to Britain, has, in default of Mr. McAdoo, more intellectual qualifications than anybody else, but his legal connection with the J. P. Morgan firm is a handicap. Accordingly, the currents are to-day running in favor of Senator Samuel Ralston of Indiana, who is a successful lawyer, enjoys great popularity in a “doubtful” state, and has an unblemished record for personal integrity and party fidelity; he belongs to the older Jeffersonian school of Democracy, is an opponent of high tariffs and a steady supporter of the league of nations. His most notable defect is his age, and, if Mr. Coolidge is nominated by the Republicans, he may be counted too conservative to win the west.

But there are now obvious signs that the

west intends, once more, to blaze a new trail of political insurgency at the next election. Its fickleness in political allegiance has been notorious. It supported Roosevelt in 1912, Wilson in 1916, and came back to regular Republicanism in 1920. But the same forces which brought into existence the Progressive party in

western Canada have been at work, and the harvest of a real political revolt in the American west is ripe for the sickle. At Washington, a radical bloc, which derives its chief strength from agrarian discontent in the west, to-day holds the balance of power in both houses, and is reducing to despair the managers of the older parties. 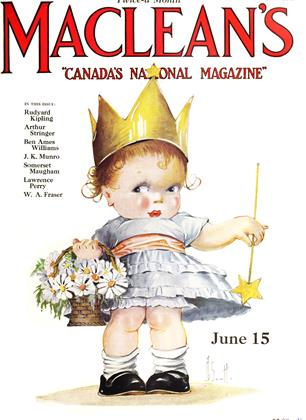