0 Canada! Our home and native land!

True patriot-love in all thy sons command.

The True North, strong and free,

And stand on guard, 0 Canada,

We stand on guard for thee.

0 Canada! Where pines and maples grow,

How dear to us thy broad domain,

From East to Western Sea,

Thou land of hope for all who toil!

Thou True North, strong and free!

O Canada! Beneath thy shining skies Many stalwart sons and gentle maidens rise,

To keep thee steadfast through the year From East to Western Sea,

Our Fatherland, our Motherland!

Our True North, strong and free!

Hold our dominion in Thy loving care Help us to find, O God, in Thee,

As waiting for the Better Day We ever stand on guard,

CALIXA LAVALLEE, the French-Canadian composer who left behind him the music of “O Canada,” was a Montrealer, a well-known musician and a pianist of no mean technique. From Montreal he went to Boston, and joined the staff of the Conservatory. He died there in 1890.

His magnificent composition, written nearly fifty years ago, inspired many efforts to couple it with suitable words, and one of the earliest was by Sir Adolphe Routhier, in 1880. The music had saturated his brain, and he penned the lines beginning:

There is no question as to the beauty of much of this verse, and it was first sung at the national festival of St. Jean Baptiste, Le Précurseur (or Forerunner) in Quebec City. The difficulty, apart from the language, and the fact that it is a hymn rather than

an anthem, is that it carries with it so much of imagery and simile that to translate it at all literally would result in something not in any way suitable for general use outside French Canada. The late Dr. Richardson, of Toronto, attempted this. His choral and orchestral setting was once presented in Massey Hall by the Mendelssohn Choir, and also by the Sheffield Choir in England, but that it lacked something of the qualifications already noted is evidenced by the fact that it has been little used since.

Further efforts were periodically made, it being the general feeling of the people that no real “heart voice” had as yet been found for the great majority of Canadians. In the summer of 1908, A. Grant Schaefer, a wellknown Canadian musician, of Montreal, heard Lavallee’s air played at a military tattoo in Chicago, and saw a Toronto Highland regiment swing past to its noble strains. This thrilling sight of his countrymen on a friendly but foreign soil, inspired to the perfection of physical rhythm by the power of great music, thrilled Schaefer to the core. When he returned to Montreal he asked his friend Recorder R. Stanley Weir whether there were no suitable English words Continued on page 47

to so fine a theme. And it seemed there were not.

Weir embarked on his self-imposed task without any thought of tangible reward. He wanted to contribute something lasting to the spirit of hiscountry, and it is no small undertaking to make oneself vocal through the lips of one’s fellows. With him were his musical friends Grant Schaefer and Dr. C. H. Perrin, of McGill University. For some reason known only to the composer Lavallee’s air had been set in the unsuitable key of G, and to rather monotonous harmonies, but a better setting and harmonization was now evolved, and in November, 1908, the first truly English rendering of “0 Canada” was published, net a “version” or translation—but original in all save the music.

TT REMAINS to-day practically as then 1 issued, with the exception of very slight verbal changes and the addition of a fourth verse to make it more completely applicable to church use. Weir gave out his work for free usage in “Schools and Colleges, Military and Athletic Corps, Choirs and all places where they sing.”

In any careful examination of Weir’s verse it will be evident that he attempted no lofty poetical flight, but did grasp at

the expression of a simple patriotism, cast in language both clear and rhythmical. To retain the spirit in his words, to make the words easily singable, and to give them the harmonic flow of Lavallee’s air was a matter of some difficulty. The musical structure of the composition and the changing accentuation of its lines had to be sharply remembered. To maintain the noble rhythm, unbroken by dislocation of rhyme or metre; to achieve the liquid consonance of easy English; and through it all to speak for those who shared in aspiration but had no common word:— that was the thing.

Many Poets and Poetasters

THE issue of Weir’s lines and the re-set music was followed by a good deal of ambitious writing by Canadian poets and poetasters. The gifted William Wilfred Campbell, not long before his death, essayed a somewhat free translation of Rou'thier’s words, but it is not in the poet’s happiest vein; which brings one back to the assumption made earlier in this brief sketch. His refrain differs in each verse, and seems to lack the vigor and characteristic pointedness of much of his original work. And it is not very singable. Dr. Richardson, of Toronto, followed Routhier as closely as possible in a religious strain, but cannot be said to have been very successful in the result. The

Hon. W. S. Fielding wrote another new anthem in 1920, which, though excellent in sentiment, was more of a pronouncement of patriotism than a song for the millions. Dr. Albert D. Watson has a version of his own, which, perhaps because it has hymnal qualities, finds a place in the Presbyterian Book of Praise published in June, 1918. Also there is a plagiarist who paid Weir the dubious compliment of incorporating several lines of the latter in a composition that received some undue publicity.

Then there have been competitions, carried out with great care and fairness, and a scrupulous weighing of all contributions. These have not resulted in anything of note, and one questions whether they ever will.

By Public Favor Only

NOR do I think that the dictum of any board of judges really influences the public in such a matter. The public decides for itself—if it has the opportunity. It whistles its favorite air and hums its favorite words in moments when the mind

unconsciously reveals that its great human heart has been reached. It may be the lilt of a song, new or old; a fragment of a well-loved air; a chord of music that is; balm to the spirit or that fires the soul; a couplet or verse that is heart-breaking in its longing and tenderness; or some expression of that vast formless, inchoate love of country which nerves men in times of stress to offer their breasts for the sake of those they have never seen. It may be any of these. But the public knows, and knows infallibly.

At the meeting of The Canadian Club, assembled last year in Vancouver, there was recorded the unanimous acceptance by that representative body of Weir’s song. The Protestant School Board has adopted it, and the same attitude has been taken by many other prominent organizations. But after all the real and final verdict was pronounced at Valcartier, Salisbury and in the mud of Flanders. It is the thing that men carry away on a great adventure that they treasure most. And the lines on the lips of these gallant gentlemen were Weir’s lines. 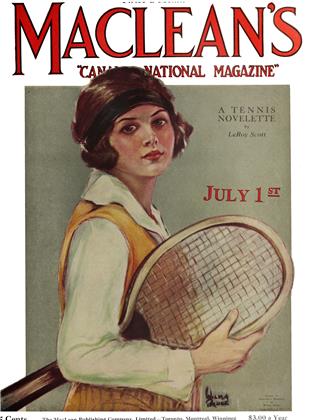