CRIME is caused by a physical defect of the brain. This defect renders its victim so far below normal in emotion that he has little or no conscience, or so far above normal in emotion as to make him hysterically irresponsible. The latter, by reason of his wild or eccentric behavior, is readily identified as crazy. But the emotionally sub-normal man is much more dangerous, both because he is so quiet that he is seldom suspected until after he has committed a crime, and because his type comprises nearly 100 per cent, of all criminals.

This discovery that sub-normal emotional response is a genuine insanity and the cause of nearly all crime, is the tremendously important work of two men in Chicago, Judge Harry Olson and Dr. William J. Hickson. Their discovery has provided a rational and consistent explanation of every kind of crime, from petty larceny to murder. More striking still, it has made it possible -to predict that certain specified people would commit certain specified crimes.

Writing on the subject in World's Work, French Strother tells of a lawyer, near Chicago, who murdered his wife in cold blood, cut her head from her body, imbedded her head in cement and used this ghastly pillar as a support for the back porch of his house.

The truth about the Chicago murderer (and about all murderers of his by no means unusual kind) is this: Like everybody else, he has two brains: the upper brain, or cortex, which is the seat of the intelligence; and the lower brain, or basal ganglia, which is the seat of the emotions. This particular man’s upper brain is above ordinary, for he was a successful lawyer. But the quality of his upper brain has little to do with his crime, for crime comes chiefly from defects of the lower brain. If tests now available had been applied to him ten years ago, this defect would have been apparent, because it is inherited and incurable. His emotional stupidity would have been revealed as so low as to compare with idiocy on the intellectual side. He was “cold-blooded” because the physical machine that registers emotions is, in his case, a defective machine. It is so defective that it barely registers emotion at all, and this fact is what made possible to him the doing of acts that would revolt a normal mind.

The novelty of the Chicago discoveries is in their proof of the reality of emotional insanity, and the practical means they provide for measuring exactly the type and degree of this insanity in any particular case. These discoveries give a rational explanation of a peculiarity of crime that has long puzzled not only the police but also those idealists who have hoped to find a system of penology that would reform criminals. The phenomenon is this: All the crime in the world is the work of less than two per cent, of the population. And most of it is the work of the same criminals, who commit one crime after another, making their lives an unending cycle of terms in prison.

Every conceivable means has been tried to break this habit of crime.

The explanation offered by the Chicago discoverers clears up this mystery at a stroke. The mental defect that makes a man a criminal is an inherited defect, and it is incurable.

money matters. The scientific explanation is that he had a “defective affectivity,” which is the result of an inherited physical defect of the structure of the basal ganglia. And competent psychologists could have tested his “affectivity” when he was twenty years old, and confidently predicted just about the course of his later life.

But, you repeat, do you deny that this clever man had “free will” to determine his course between good and evil? The answer is a little complicated, but quite intelligible. So far as his intelligence is concerned, he knows that people around him regard what he did as being wrong. Nearly all thieves have sense enough to know that society punishes stealing, and they therefore try to conceal their thefts. But so far as emotionally feeling about his acts what his neighbors emotionally feel about them, he does not, because he cannot. He hasn’t the machinery with which to feel that way. So the complete answer to the question of his free will is, that he had free will only so far as his intelligence and his judgment of what is safe to do controlled his actions.

This explains why relatively few men of high intelligence commit crimes. For one thing, they are exposed to fewer temptations, and when they are tempted, they have enough intelligence to act as a brake upon their impulses. But no matter how clever they are, if they have a serious defect of the emotional centres, reason yields to instinct, if the temptation is strong enough, and they obey the more powerful spring of action.

On the other hand, the man who has only a fair intelligence, or is a shade below average in intelligence, has no balance wheel against wrong impulses.

The old theories of crime were theological in origin. Because sin, which is a bad emotion, so often led to crime, which is a bad act, mankind, almost universally, believed that a criminal was simply a sinner who did not use the grace of God to repress his sinful desires.

Now, what is the meaning of “defective affectivity?” Every human being has two minds—not in any mystical or Freudian sense, but literally—two sets of “gray matter.” One is in the upper part of the head, literally “the dome of thought.” This is the “thinking” mind.

The other mass of gray matter is the “feeling” mind. It is “the base of the brain,” or, as the scientist calls it, the basal ganglia.

The lower mind, then, is the home of the emotions.

These are the only two functions of the lower mind that concern crime: the emotions and the will. All crime comes from a defect of the lower mind only. The criminal then, is a man whose lower mind is defective, so that he does not have the right feeling about what he ought to do. Your cold-blooded murderer has a lower mind defective to such a worse degree that it feels no repugnance to taking another man’s life.

It has been generally known for some years that scientists could test the quality of the human intellect. The so-called “intelligence tests” are familiar to most people. They are tests of the upper brain only. But few know that it is now possible to test, with equal accuracy, a man’s power to feel. The scientific expression is, to test his “affectivity”—that is, the quickness, intensity, and normality with which his lower mind responds to, or is “affected” by, appeals to his emotional nature. And as a man’s conduct, behavior, “goodness” or “badness” reside in his response of emotion and will (functions of the lower mind) these tests are accurate index not only of the quality (emotion) of his lower mind, but also of what he would be likely to do (will) under any given temptation. These tests have been applied to forty thousand criminals over a period of ten years. The results are astounding. One kleptomaniac will give the same response to these tests that every other kleptomaniac gives. Every type of criminal has his characteristic response. You can test a boy of seventeen and then declare with certainty that he will commit murder before he is twenty-five.

Why is this possible?

Because, in practice, there is invariably a “slit) of the mind” when a man with a defective lower mind performs certain conscious acts—that is, acts that require co-operation between the thinking mind and the feeling mind. Sometimes, word tests are used to determine the normality of the emotions. One way to determine the normality of a man’s emotional response is to call out to him a list of words, asking him to give instantly the first word that comes into his head as each word is called. This is an “association of ideas” test, but the words are chosen for their emotion-evoking character, so that the words which they suggest give an idea of his “affectivity.” Let us take four words, for example, and illustrate some characteristic responses. First, a normal response:

Suppose, however, that you were in the psychopathic laboratory attached to a criminal court, and a man were brought in to be tested, of whose offense you were unaware, what would you suspect the charge to be if he made the following responses?

You would doubtless suspect him of

arson, and you would be right.

What the criminal psychiatrist calls the “word test” is the best confirmation of his diagnose. By “word” test he means the man’s capacity to measure up to the responsibilities of life. The “word test,” therefore, is of first importance. The criminal psychiatrist finds the answer to it in the history of the man before him. If. at twelve years old, he stole his teacher’s poeketbook; at fourteen was sent to a reform school for stealing a drunken man’s watch; at seventeen was re-committed for robbing his employer of money collected as the driver of a delivery wagon: and at twenty is caught in the act of burglarizing a house, this “word test” is certainly confirmatory data for a diagnosis of habitual criminality.

For the point is, crime is not “crime,” as we commonly think of it. It is not the wilful pursuit of evil, indulged by perverse spirits lost in sin. Crime is not even a disease. Crime is a symptom of a disease. It is a symptom of a disease of the actual physical gray matter of the lower brain. Even that is hardly accurate, scientifically. Crime is a symptom of a structurally defective lower brain. The criminal is, therefore, a person who is stupid or feeble-minded or insane, not on the side of intelligence, but on the side of the emotions. “Emotional insanity” has come into disrepute, through insincere or ignorant use of the phrase; but when the phrase is properly used, it is a scientifically accurate definition of the cause of all confirmed criminality. 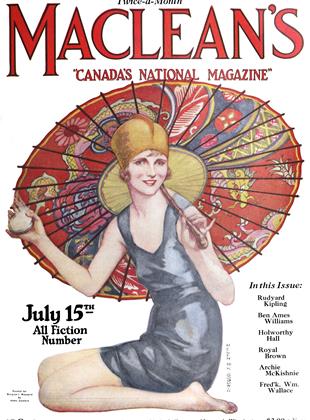