OCCASIONALLY readers write to the insurance editor asking his advice regarding the exchanging of one type of life insurance policy for another. The following question is a typical one: “I am contemplating exchanging a straight life policy, non-participating, for $4,000 for a Twenty-Pay Life non-participating for the same amount. My Straight Life Policy has been in force for-sixteen years. The agent for the company informs me this can be accomplished by paying the difference in reserves between the Straight Life and the Twenty Pay Life, which amounts to $633.84. This can be paid in cash now, or the amount can be loaned under the new policy if desired, at six per cent. I would then be required to make only four more payments and would have a paid-up policy for $4,000. If I allowed the difference in the reserves of the two policies to remain as a loan, and if at the time the Twenty-Pay Life Policy matured this loan remained in force, the agent says the interest on the loan at six per cent, would amount to about thirtyeight dollars, or considerably less than the premium which I would go on paying under the Straight Life policy. The surrender values I am told would be $1,724 on the Twenty Pay Life as against $804 under the Straight Life contract. What do you think of this exchange? I am now thirty-six years of age.” Whether you should make this change or not depends on your circumstances.

From a monetary standpoint, as we see it, there is no advantage in making the change. Fundamentally the two policies are alike; the only difference being one policy requires you to pay premiums practically for the balance of your life, while the other is fully paid up in twenty years—in your case in another four years. For the privilege of having your policy mature in twenty years you are required to pay a higher premium. But from an actuarial standpoint there is no difference in the policies. If you want to pay the policy up sooner, you have to pay a high enough premium to meet the cost' at the stated period. As a general rule there is little to be gained by changing from one life policy to another. It sometimes happens, of course, that a man, when between the ages of twenty and thirty, purchases insurance policies that become burdensome later on when he is married and the father of several children. It is conceivable also that a man may carry a large amount of Endowment insurance, for instance, when young, which, when responsibilities become heavier, it would be to his advantage to change into Straight Life, where he would be getting more protection for the same premium. However, in your particular case there is no advantage in making the change now. At .first glance it would seem as Continued on page 8

If you do not desire to go on paying premiums for the balance of your life, your better policy perhaps would be to keep your Straight Life until the twenty years are up and then change it to a Twenty Pay Life. The advantage in changing at the twenty-year period instead of now is obvious. Should you make the change now and die before the twenty years are up, the company would pay your beneficiary $4,000, less the amount of the loan, if it still remained in force. On the other hand if you let the policy remain as it is, and you should die, your beneficiary would receive a full $4,000.

An alternative plan would be to apply now for paid-up insurance on your Straight Life contract and then take out new insurance at the attained age either on a Straight Life participating plan or a Twenty Pay life plan. 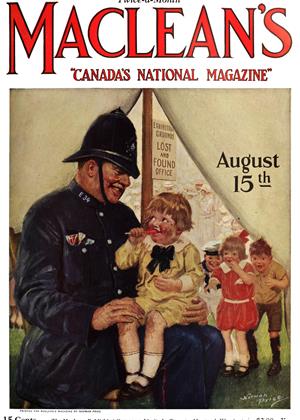