WITH a continuance of such healthy, indices as expanding export trade, ready absorption of Canadian loans both in the domestic and New York money markets and the prospect of a 300,000,000 bushel western wheat crop to market at higher prices than a year ago, the Canadian business man enters the autumn season with a warranted confidence. More cheerful news regarding the crops upon the prairies with indications, too, of a better yield throughout the northwestern states halted the primary grain markets at the beginning of September, in their climb toward higher cereal prices. But the effect will be more definitely a speculative deterrent than an actual loss »o the grain producers.

The suspicions with which the, ultrapessimistic crop advices of Chicago “experts” were received in mid-summer appear more fully justified, and the more reliable later sources of information indicate a wheat out-turn for the West more nearly approaching 300,000,000 bushels. The actual bushel decline from last year will be offset, so far as the farmer’s buying power is concerned, by the enhanced marketing conditions for wheat and other cereals, this season.

The uncertainty regarding the crop has not been without its beneficial reactions. It has served, for one thing, to discourage “boom” propaganda, than which nothing could have been more hurtful at this time. The Dominion is vastly better off for improvement by gradual stages than by unsound inflation.

A SERIOUS shortage of bread grains in the world is reported by the International Institute branch of the department of agriculture at Ottawa: a world decrease of 375,000,000 bushels of wheat and of 128,000,000 bushels of rye. The importance of such information in the crop estimates cannot be lightly passed over; it is the old story over again of an ill wind blowing someone good, and that someone this time being Canada.

“A serious world shortage of wheat running into the next crop year will have the effect of sustaining prices at a level attractive to the producers,” as the Regina Leader reminds. “A shortage of rye would assist to the same end, as in parts of Europe rye is a common bread grain.”

According to a statement issued by the National Bank of Commerce of New York, American exports of wheat and flour to Japan last year were more than double and to China more than two and a half times those of the previous season, while Canadian exports to Japan nearly trebled, and to China nearly quadrupled. As the Orient becomes more and more accustomed to the use of wheat and wheat flour, a steadily increasing demand for these commodities among a population of 450,000,000 people will have to be supplied, chiefly by the United States and Canada.

All of these factors would seem to point to the maintenance of remunerative prices for wheat.

LOOKING over Canada one finds J other reasons for agreement with Sir Henry Thornton, who, following his summer mission across the Dominion, made the statement that the more he visits the various sections of this country the greater his optimism becomes. “Canada has a diversity of industries

and its natural resources are so great that I can find no room for pessimism,” says the head of the Canadian National Railways, continuing, “pessimism belongs to a small but invidious cult that seems never to be happy unless it can find fault with something. There is no place among the people of Canada for pessimists. My suggestion as a remedy for those afflicted with this unfortunate habit of pessimism is a trip to the coast and back again, and my advice is let us not worry unduly over conditions, but take off our coats and see what we can do to make the country more prosperous.”

The Pendulum of Trade

PROBABLY the most telling evidences of Canadian production serving to strengthen our economic position, are to be found in the figures of our international commerce.

Canada’s export trade has been giving a satisfactory account of itself and the Hon. T. A. Low, Canadian minister of trade and commerce, returning from abroad, expressed faith in a continuance of this export demand for Canadian products. For one thing, Mr. Low’s European investigations have led to a conviction that a tremendous market is possible in the export of meats if Canadians will trouble to study the highly specialized demand, especially of the British market, to a greater degree than in the past.

For the first four months of the current fiscal year our international trading position is distinctly healthy, with the balance on the “right” or favorable side of the ledger. Exports have increased $20,954,000 and imports declined $42,864,000. Apropos of which the Toronto Globe says: “There is no reason for gloom in such a trade showing.”

The Montreal Gazette on the other hand finds that “the less favorable feature” of the July trade return, which disclosed a $6,000,000 export gain, “is that the increase occurs almost wholly in the single item of agricultural products.” The other principal item of Canada’s export is wood—pulp and paper—and the Gazette points out that “the export of these products is still large, but it is diminishing with no prospect of an early reaction upward, and as wheat and wood constitute much the largest part of Canada’s exportst the prospect is for a diminution in the value of this trade, even a considerable diminution, before many months have elapsed.”

The Toronto Daily Star foresees permanency in this trade improvement. “Canada is finding a ready market for her goods,” the Star comments, “and getting her share of the trade expansion which appears to be general throughout the world.”

THE increasingly favorable balance of trade has been a factor in raising the Canadian dollar to par exchange in the New York money market—trade, coupled with a distinct investment demand in the United States for Canadian securities.

Our dollar’s recovery at this time is chiefly interesting because of its probable bearing upon the forthcoming Dominion borrowing, which the Hon. James Robb, acting minister of finance, foreshadowed before he went to Europe in the early summer. If Canada can continue to maintain a favorable trade balance, and simultaneously continue to keep the Canadian dollar at par in New York,

there seems every reason to believe that the finance minister will find borrowing in the United States a profitable operation.

“The return of our dollar to approximately par with the funds of the United States is a source of satisfaction to Canadians generally, for in the first place it indicates that our dollar shares with that of the United States the distinction of being at a premium in practically every country of the world,’’ remarks the financial editor of the Toronto Mail and Empire, adding, “and in the second place it removes a trade handicap that has bothered Canadian importers to some extent throughout the period since the war.”

ONTARIO’S latest borrowing transaction is a notable barometer. The province’s $20,000,000 4 per cent, bonds, due 1944, were fully subscribed within twelve hours of being placed upon the market, one of the speediest and most definite evidences of financial digestion this year.

“For several reasons this issue was the most interesting piece of government financing of recent months,” according to the Toronto Globe, which points out that, “in the first place it was the first longtermed government loan available to the Canadian investor since the war to bear a coupon rate of 4J4 per cent. Its success indicates beyond a doubt that the Canadian bond market has finally departed from the 5 per cent, coupon rate and that the prevailing rate on highI grade issues henceforth will be 4j/¿ per ! cent.

¡ “In the second place the new issue afforded a perfect comparative barometer of the investment demand for high-grade Canadian issues in the Canadian and United States bond markets.”

“The strength of sterling is being I followed with interest as reflecting the ' possibility of London figuring in a three; cornered issue with New York and the I home market,” as the Financial Post expresses it. On the other hand the financial editor of the Toronto Globe believes that as more than half of the Ontario issue was sold to Canadian institutions and investors, “it would I seem to indicate that no small part of

Canadian government and municipal financing during the next few months will be done in the home market.”

THE Quebec Telegraph the other day professed to have definite knowledge of an early influx of British capital to Canada, an element in our economic rehabilitation which has been confidently looked forward to ever since the armistice. International exchange up to the present has made the transfer of British capital for investment in the Dominion illogical for the reason that it was much too costly an undertaking for the average investor; but there have been frequent indications over a considerable period that many Englishmen are only awaiting the propitious moment in exchange.

Apart from the continued interest in the crop outlook in western Canada and the favorable harvest in Eastern Canada —because, after all, as the Toronto Globe reminds, “Ontario is still the leading agricultural province of Canada”—business men are keenly intent upon two developments of primary significance. The first, according to the Financial Post, “involves the consequences of the successful termination of the London conference and the official adoption of the Dawes report,” leading to more complete economic reconstruction of continental Europe. The second “is what may be the beginning of an important influx of capital from the United States, owing to the plethora of non-invested funds and from Great Britain as the pound sterling approaches par.”

The subjoined table gives an interesting analysis of Canada’s foreign trade since the commencement of the 1921-22 fiscal year: 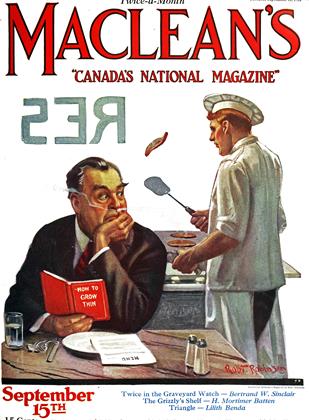