ALTHOUGH it is primarilyin the climate of the year-round sum mer that the bunga low has its greatest popularity and in deed its greatest use, it is yet one of the most popular and one of the most attractive of the smaller home de signs the continent over. As a matter of fact. a bungalow is really one of the most admirable allseason types of constri c tion which coulci h~~e been devised. Its first use, of course, was as an airy dwelling in countries where tropical or semi-tropical heat demanded one freesweeping floor where the infrequent breezes of a torrid season might have full play at the moments of their presence. Being one-storey fabrications, their rooms benefited by very nearly the entire height of the house and proportionate windows. So in the temperate zone, they make ideal summer houses, and are equally respon siveto heatinginthewinter. The fact that there is but one important level of rooms which requires heating is a great advan tage in the distribution of furnacewarmth. The bungalow, however, is not a house which can be "set" down in any neighbor hood and expected to be effective from an exterior point of view. Bungalows re quire grounds. They not only demand more space than other houses for the actual space covered by their spreading construction, but they require a setting that is mentally satisfying as well. They are, therefore, ideal in suburban districts where land has not yet reached the pre mium mark and where surroundings are likely to be more in keeping with their atmosphere. It is the exception when a bungalow finds a happy location in any thing like a built-up district of the city. Of course Vancouver and Victoria, garden cities in their every residential section, are ideal settings for the pure bungalow type. But there are splendid examples of this most home-like small dwelling from the east to the west coasts of Canada, and they are not only giving satisfaction in every climate, but real pleasure in themselves.

A FINE representative of this modern bungalow is the home of Mrs. E. Wagner, Vancouver, B.C. Of frame

construction on full concrete basement, it is finished in cream-colored stucco. Colorful awnings give it a festive note, the outside steps and chimney caps of red, vitrified paving bricks add another touch of color, and the whole is jauntily topped off with fire-clay chimney pots. The windows are of the double-hung sash variety throughout, save in the sun room, where casements are used. In the upper sashes of a number of the other windows, however, an interesting varia tion is introduced in their subdivision

with wood bars. The interesting detai' of the subdividing of the sashes is plain above the wide living room window which appears at the left of the picture shown below. Another fetching exterior detail is the conception of rough cedar flower boxes on cut brackets. The concaved arc over the steps and its supporting pillars make a charming frame for the white muntined glass door over which it projects, forming a little loggia. The recessed entry is a point in

good form in any r)ungalow, taking its precedent a~ it does, lrom the orig~n~1 type wnich was ch~eiIy haracter izea tiy :ts gird.ling 9 /1-i es deep r,orros. In Canada, wherever PclltY such complete porching would be 1 r exceedingly bad policy, and it is in the modified e lfl type such as that here pre sented, where roofing does not overhang to too great an extent or verandaha shut out too much light or catch snow, that the modern all-climate bungalow is at its best. The house entry is devised on a plan that has a very interesting development. ou will note that the three-sided stoop is at the angle of walls both of which bene fit by the full front exposure of the house. Seven full rooms branch out from the axis entry hail, while a side entrance with portcochere, provides a second approach. From this side entrance a passage divides the house, providing access to the two downstairs bedrooms, bathroom and kitchen.

The Heart of the House T O THE right of entrance is the dining room, in turn opening by two glass doors to the sunroom beyond. This pen tagonal room is provided with a fireplace of opulent proportions in tapestry brick, flanked by built-in bookcases. This room might well become the very heart of such a house by day and by night, developing into the equivalent of the "upstairs sitting room" in the two or three storey houses. The logical place to direct one's steps after the meal, warmed and lighted by the sun during the hours of light and inviting with a roaring blaze by evening, it has the characteristics which stamp a room, even in a black-and-white plan, as a favorite.

The kitchen is reached from the dining room by a swing door, and a mosaic tile drainboard, cooler with water-coils, builtin cabinets, electric range, built-in ironing board are some of its features. It has access to a back porch on which is pro vided a broom cupboard and access to cooler closet. The basement stairs descend from the kitchen, aswell as the flight above stairs to the one room on the second floor-the maid's bedroom. To the left of the entry hall is the large drawing room, finished in French panelling in antique ivory finish, and cove ceiling. Here, too, is an inviting fireplace in enamelled tile—but the room itself has a distinctly formal note. In the picture of this room here shown will be noted the interior effect of the sub-divided upper sash in the large window. It is a feature which would lend itself to numerous curtain treatments—one of which, much less studied than that here illustrated, is the stretching of natural silk or net across that portion of the window, leaving the lower sash also curtained, and hanging from either side without valance, straight over-drapes of some plain but striking color.

In this curtaining, the decorative design

worked into the rear hall opposite entrance to bathroom. Here a tiled floor,, built-in bathtub, pedestal handbasin and linen chute to laundry in basement are features.

Abovestairs, by way of flight in kitchen,, is the maid’s bedroom, provided withcloset and linen chute. Here too, is amplestorage room. The roof is designed to shed rain and snow. There are no catchingtroughs or inlets to trap water and rot thesurface.

Some Notes on Construction

THE stucco of the exterior of this houseis laid on cedar lath nailed on one-inch furring strips. The floors throughout themain storey are quarter-cut oak. The?

of the wood rays will still appear in the interior, as the light falls through.

Over the white mantel with its pure design, will be noted the long horizontal mirror which reflects considerable light into the room. This type of glass is known as a “landscape” mirror, and is highly recommended for such use as a reflector of light. Equally effective over a long table, it adds a dignified and not overemphasized touch of light in any room, and is considered particularly good where a formal effect is desired.

Bedroom No. 1, which may be considered the master bedroom and which faces the front lawn, is splendidly equipped with closet room—two large wardrobes in which special shelf arrangements have been provided. This room is lighted from two sides.

The smaller bedroom across the hall, is also amply provided with closets, and is well lighted from side and back.

Linen presses and coat cupboard are

basement is finished in laundry and boiler room with ample storage space. It seems to be a prevalent belief that bungalows have no foundation—this, of course, is simply one of the conceptions which have come about through the wide use of the type in warm countries and as summer cottages. Truth to tell, the cellar of a bungalow is usually more spacious than the ordinary small house basement.

The people who should own and enjoy bungalows according to the laws of logic are perhaps more limited than those to whom a wide range of houses might be equally suitable. For the family without children, they are ideal—for the woman who keeps house alone, they are delightful; for the older couple to whom the climbing of stairs might be injurious, they are a boon. To all others they must be considered from the personal viewpoint—carefully. The only builder to whom they might possibly be absolutely taboo—is the man with an increasing family! 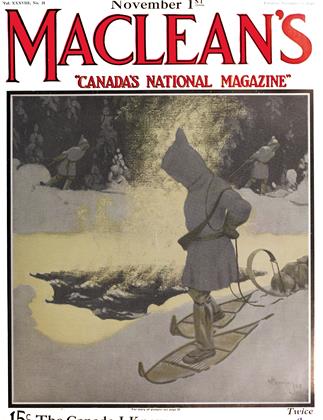