"I’D GIVE anything if my wife had had a business education,” a gentleman A told me recently.

“Then you think a business training is an advantage to any woman?” I asked.

“Assuredly,” he replied. “Both my daughters are going to be business trained as soon as they are old enough. It puts them on a better footing with the world in general and is of benefit to them all their lives. Why, the other day I found out, by chance, that whenever my wife wants any money she goes to the bank

Just how many such women there are with implicit trust in the honesty of the bank clerk, only the banks themselves know. And in lots of cases the husbands don’t know of the ignorance of their wives! They are shocked when they find it out, as this man was, but after all, isn’t it a perfectly natural thing? How can

one be expected to know anything about a something which has not heretofore been encountered in their daily life?

Formerly, it was consistent for the daughter of the house to “stay at home” after she had graduated from school or college, where she either turned her energies towards cooking, fancy work or the making of a hope chest. Now, the majority of girls prefer to go out into the world and fend for themselves, to establish themselves on an independent basis, and so guard against fickle future and the horror of being a “dependent relation.” 'The girls are absolutely right in this. I

recall a member of my own graduating class who passed with high honors. It was generally understood she would eventually marry “John.” She didn’t go to college. John said he liked old fashioned girls, and so she spent all her time learning to cook and adding to her very large hope chest. This hope chest has not yet been used, and the most of its contents are out of style. John has married another girl, and she who graduated so brilliantly and showed such a promising future is now little more than a household drudge, and quite dependent upon her father. How futile, after all, is planning, and how different the actual unfoldment!

The Land of Pay Envelopes

THE foundation work of any person’s life is vastly important. Take Nancy’s case for example. Her husband died before they had been married a year, and she found herself forced to earn her own living. Formerly she had been ledger keeper in a bank, and so in short order she found herself back in the land of pay envelopes.

“1 don’t know what I should have done,” she admitted. “I think the only thing I could hjave done was to have opened up a boarding house, and I hate the very thought of that.”

I recall the case of two sisters. Oily, the elder, dreamed dreams she couldn’t fulfil.

She longed for pretty clothes and a gay, bustling sort of life. She wanted plenty of companionship and plenty to do to keep her brain busy. She was sorry when school days were over. She wanted to be a school teacher, but her parents threw up aghast hands at the idea. Their daughter work! It wasn’t to be considered for a moment, and so Oily married Tom to escape the horror of being an old maid. Tom isn’t good to her. His cruelty as a boy had turned many of us from him, and Oily hasn’t that practical tactfulness to wean him. She stays with him because she knows she cannot support herself away from his roof. Her younger sister •lean found life a little more to her liking. When Jean graduated, the war was just over, and Jean, with a little independent toss of her head, announced she would be a stenographer. Moreover Jean had been quietly saving for some time, and her parents, who had gleaned some experience at the expense of Oily, consented, though reluctantly.

Jean was not silly enough to go out into the business world and expect it to be upholstered with downy cushions. She got lots of hard knocks, and with the knocks came needful experience. She learned the actual value of a dollar, and how far she could make it go in an emergency.

“More than that,” she confided to me one day, “if I think I get a raw deal, I can resign. I’m not tied to that firm like a woman is to her husband.”

Jean is married to-day, but she has acquired enough of the give-and-take spirit and the value of a hard day’s work to be a real helpmate and not a mere housekeeper. She can discuss intelligently with her husband the various phases of his business. Often she is ready with some helpful suggestions and he fittingly dubbed her “Pal.”

NO GIRL realizes how useless she is until she finds herself in the business world. She sees no reason why she should be a “dumb Dora” because other girls were before her. She has, perhaps, a college education and a diploma which, after all, is hardly worth the paper it is written on. In a few years its value ascends, however, for her groundwork in business is a very important point, and one which some girls overlook in their impatience to be earning their own living.

The day before I started in at my first job a girl who had been working for several years volunteered this advice: “Don’t let anyone put anything over on you. Fight.”

I accepted this advice and used it at first. Then commonsense showed me how wrong it was. In any walk of life there should be no chips on the shoulder, much less in business life where there is little time for pettiness.

I know of a girl who was continually wrangling with her employer.

“I hate him. He won’t give me a square deal!” she declared.

Investigation showed that “charity begins at home.” This girl was constantly

devising ways and means of getting ahead of her employer. He lost his trust in her, and soon it became a sort of human chess game. Whichever one scored gloated about it as a successful move, little attention being paid, incidentally, to the manner of the moving!

It was merely another case of the “pot calling the kettle black,” and much valuable business time was wasted.

That wonderful spirit of give-and-take means much, when it is used in accordance with the Golden Rule, and the average business girl is quick to find its worth. It’s the true spirit of co-operation.

You will rarely find a business girl late for an appointment. She appreciates the value of time: She must be at her desk in the morning at the allotted hour, trim and neat, and smiling—ready for the work of the day. After a while it gets to be a habit with her and she doesn’t think twice about it. How many home girls are there who get up with the business girl? A business-trained housewife is rarelysloppy about her personal appearance. She gets up in the morning, fully dressed, and starts her husband off to work with a light heart. The use of a boudoir cap is horribly abused by many women.

APPRECIATING the value of a dollar YX is a most important asset, and that appreciation which is born of experience is of highest quality.. When I was handed my first pay envelope I imagined myself suddenly rich. I smile when I think what I did with that money now. Why, I didn’t know what to do with it really, and I thought I was using it ever so judiciously! The knowledge that pay day comes but once a week and that it and it alone supplies the wherewithal makes one somewhat circumspect in buying. “Being broke” has its thrills as well as the pay envelope and respect is due to each.

Clear-headedness is another asset of the business-trained girl. If her training has been a success, it has been largely due to her own initiative. One’s success is based on one’s own efforts, and in the upto-date business house no “dead wood” is tolerated. Particularly is this true in newspaper life, but it’s not always a disgrace to be fired from there. Sometimes it is a thrill!

There is an old idea still afloat that a business woman loses caste in society. Not so. Often she gains more caste. This is an age of independence, and it is not required that one should state how they live from day to day so long as the living is in accordance with the law of the land.

No matter what her walk in life, every woman should be equipped for emergency. | When her house is not “built on the sand” 1 she is able to stand shoulder to shoulder j with her husband, unafraid, resolute and smiling. She is more to him than a mere housekeeper or the mother of his children. She has no fear as to the possibilities of her future. He is wonderfully proud of her, and, man-like, he often doesn’t stop to analyze the real reason for his pride. 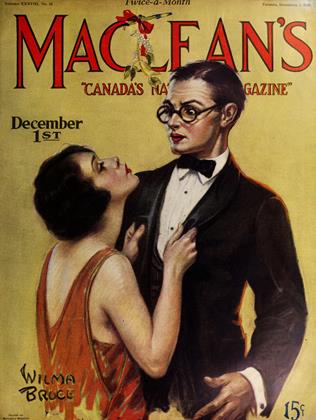