HE SAT before his open fire basking in its solitary warmth. Outside the wind blew in sudden gusts. It rattled the windows and sifted in through the window casings, making the heavy curtains sway as at the touch of some unseen hand.

George Morrow drew his chair closer to the blaze, and scowled at the empty chair beside him. It was not often empty. He was young and wealthy, and he had many friends. But to-night there was no one.

“Christmas, you know, old chap,” they had answered to his invitation.

He scowled again. AH this pother over Christmas! Why couldn’t people treat it sensibly? His smile was complacent as he thought of his own method; a substantial cheque sent to a well-known house. They would look after his friends with eminently suitable gifts. So much George Morrow conceded to a sentiment.

He picked up a book but it lay in his hand, unopened. Poor imbeciles, he thought, plowing around in the cold and snow, while I sit here in warmth and comfort. To his mind there came the memory of something he had read. About warmth, it was. He fumbled, drowsily, with the thought. He remembered now. Someone had written to Thoreau:

“I cut a cord of wood, carried it into the house, and built a roaring fire, and here I sit in warmth and comfort.” What was it Thoreau had answered? A penetrating question, he remembered. The words came back to him, suddenly, and with a strange emphasis, as though someone had spoken them sharply in that quiet room—“But what did you do when you were warm?”

GEORGE MORROW stood up with a quick, impatient gesture. He was weary of his solitude and his comfort. He put on his coat and went out. All around him was the rumble of traffic, the blaze of lighted windows, the gleam of lighted eyes. He watched them, half in wonder and half in envy. Christmas, he thought, but the thought had no power to stir him. What had it meant to him? A good dinner, where good dinners were not a novelty; jovial company; the exchange of inconsequential gifts— so much and no more.

He stopped on a wind-blown corner, settling his fur collar more closely about his throat. A shabby, draggled figure of a woman passed him and stopped to drop a coin into a beggar’s cup. He had not noticed the man until

that moment; but now he stopped to speak to him. “It’s a cold corner you’ve chosen, my friend.”

“It’s a good corner, sir; but most corners are good at Christmas.”

“Thank you, sir,” he said as another coin rattled in the cup, and then, as an afterthought: "There's always folk* who could do with a bit of warmth.”

George Morrow, who had turned away, eame_ back again. “But what would you do if you were warm? he asked with a faint half-smile on his lips.

“Warm, really warm, with a fire, and coals to keep it going?”

“I know' a heap of people who’d be glad to share it with me.”

George Morrow' stooped and crushed a crumpled bill into the battered cup.

“Go and share your fire,” he said, “if that will keep you warmer.”

Farther on, a friend touched his shoulder.

“Thought you were above this Christmas foolishness, George,” said the hearty voice.

Morrow nodded, absently: “What would you do if you w'ere w'arm?” he asked.

His friend surveyed him with a puzzled air.

“I could do with some warmth right now,” he said, “but the wife has sent me off with a basket of things—woman who washes for us,” he explained.

“There’s a woman who washes for me,” George Morrow said.

“How should you?” asked his friend. “Besides, you don’t believe in Christmas. The wife does, and we can afford a bit.”

"And you’re wading through the snow to take it to her? I suppose that's the answer."

"If you’re cold." his friend replied, in a voice in which puzzlement and anxiety blended, “better step in at the Settlement House—only a block away. They’re having some Christmas festival there, and it’s sure to be warm.”

Morrow nodded and passed on.

The man in charge of the Settlement spoke to him as he entered.

T didn't know." Morrow said slowly, “that there was any need for this. I thought people were prosperous, generally: that all people were comfortable. Times are

"Times are always good for some people," said the man.

“For the merchants at Christmas,” Morrow mustered his customary sneer; “sowing a sentiment and reaping a surplus.”

"No," said the man, sha'rply. “That’s just a cheap jibe that doesn’t touch the truth anywhere.”

Morrow showed no resentment. He looked about him. “Yes, cheap,” he said.

“It’s easy to scoff,” said the man, “but if we had Christmas every day, there would be less need of pity in the world. No one can use it, they can only serve it. You can call it an empty sentiment, a tradition, a commercial thing—anything you want, but we know that it touches people’s hearts, and makes them warm and thoughtful and generous. There are people who are dying for that warmth. Perhaps you don’t see them, the little children with empty hands and hungry hearts, the old people dragging out their days in weakness and loneliness, and other people hiding sorrows in the secret piaces of their hearts.”

“I have known only one Christmas,” said George

Morrow. “It was a solitary affair. I hate it,” he saidwith sudden anger.

“You have never had it to hate,” said the man. “Christmas isn’t a day. It’s a spirit. It lives on sharing.”

“I have given gifts,” said George Morrow.

“I hate my Christmas,” said George Morrow, with that same flare of anger, “will you show me yours?”

“If you will come with me,” said the man.

It was late, very late when George Morrow sat again before his fire. It had burned low, so that there was little warmth ; and the vacant chair was still vacant. But he did not notice it, for the room was peopled with new faces; sad faces that grew bright with joy; weary faces that lost the look of care; bitter faces whose bitterness blossomed into hope. He was not a thoughtful man, so he only knew that his own heart was strangely warm.

But if that warmth had found a sense of words, it might have been like this; You may keep Christmas many ways—but you can not keep it to yourself alone. 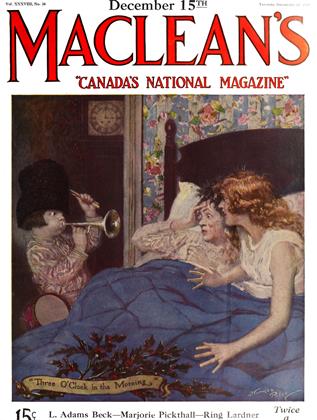