THE full part which the “mosquito fleet” of Britain played in frustrating Germany’s U-boat and mine-laying campaigns during the great war perhaps never will be known. Vast numbers of the members of the heroic crews on the little motorboats, trawlers and fishing vessels which were wont to slip out into the fog on their mystery missions never came back to tell the tales of the submarines they sent to Davy Jones’ locker, the mines they destroyed and the German auxiliary war vessels they disabled. Those who did survive are not given to telling much about their adventures.

In an article entitled “Romance of the Merchant Ships,” J. J. Bell, writing for the Quarterly Review, stresses the great part which the “mosquito fleet” played in war time. He presents this arresting word-picture of the scene from Forth Bridge as it is now and as it was when he looked upon it during the days of the submarine menace:

The train was crossing the Forth Bridge. It was noonday and the sun shone. A light breeze ruffled the river; the ripples gleamed. Seawards the islands and rocks rose like new-carven things; westwards one looked down on and over the piers, almost deserted, of South Queensferry, then across to Rosyth, with its giant cranes idle in the smokeless air. Rare good visibility for December in these parts; fine weather for the time o’ year; too clear, perhaps, for the imaginings of things that never were, yet not too bright for the seeing of ghosts of things that had been.

A little black coaster jogged sedately up channel towards the bridge. It appeared that she had the Forth to herself. On her alone, this gay December day, looked down the bridge that not so long ago had looked down on many great ships of a great navy. How strange it was now to behold yonder waters so vacant and untroubled! In those dread days to cross the Forth Bridge was a thrill—to some a cold thrill. Those great grey ships, all moored and motionless, waiting—for what? Sometimes one could count them; sometimes they were blurred or blanketed by haar or fog. And now and then most of them were gone away, on what business one never knew, save once, when they returned, battered and broken and burned, from Jutland. A heart-shaking sight that, compared with which the coming of the German ships at the end of it all was as nothing. Does any one of us who crossed the Forth Bridge in wartime forget what he saw by day, or fancied in the night?

The train ran into Fife, and I was on the alert lest I should miss the bay of Inverkeithing, wherein, after the war, were crowded together vessels, large and small, for the shipbreakers. Of late their numbers have been dwindling, but a few still remained—worn-out, used-up minesweepers and patrol boats. There they lay, ruinous, forlorn, in the mud; and, with all reverence to the memory of the Great Admiral, it was borne on me that the meanest of these poor derelicts might well have known more of the terrors and horrors and sheer awfulness of sea war than had any one of his mighty Wooden Walls.

It is only when one has read such

books as “Seaborne Trade” and “The Merchant Navy” that one begins to comprehend how stupendous wa.s the national task; and without reading them none need hope to imagine, in the paltriest measure, what sea warfare means to those who man the ships, to those on land who bear the burden and responsibility of direction, to those who toil against racing time, and to those who only sit and wait. Well, here is the whole truth, calmly yet not coldly told, with neither self-glorification nor belittling of the enemy. It is truth we ought all to learn. We know too little about the Royal Navy; we know less about the R.N.R. and R.N.V.R. But do we want to know more? With the normal pulse of peace-time we are a practical people, apt to forget things not entered in our ledgers, shy of what we call sentiment. Still, as a practical people, at present watching the British pound going to par, we might casually, and colloquially, ask one another the question: “What price the British pound to-day had the merchant seamen failed Britain in her extremity?”

“Seaborne Trade” and “The Merchant • Navy” referred to above are two recent books by C. Ernest Fayle and Archibald Hurd, respectively. Of the amazing courage of the men who manned these small craft Mr. Bell writes, quoting from Mr. Hurd’s book:

Shall ever failure be more gently remembered than the attempt to sweep the Narrows of the Dardanelles? Not once but thrice they try—seven little ships, manned mainly by fishermen as yet acquainted only with the war with the winds, the bombardment of the billows. Deliberately out of the night they steam into the dazzle of enemy searchlights that blaze athwart the minefield which has forbidden the armored might of Britain. But it is the Impossible. Shelled by the enemy batteries, blinded by the glare, staggering amidst the lurking mines—the “Manx Hero” strikes one and blows up—they can no more. “But let no man dare call these men cowards!” writes Mr. Hurd; “throughout the whole war these fishermen and their R.N.R. officers were never frightened of mines nor submarines . . . but it was quite another matter to take these men straight from the North Sea and turn them, ordinary fishermen, into conspicuous targets for field guns and forts. No harder or more dispiriting task was ever set the vessels of the auxiliary patrol through the war than the sweeping of the Dardanelles Straits. The dice were so loaded against them that the sweepers had no chance.”

One regrets on reading Mr. Bell’s article that he did not give us more stories of the actual adventures of the “mosquito fleet,” but these two are quite colorful:

We come late into Aberdeen, and in a blizzard; but this is before the days of restrictions in creature comforts, before we have been taught how much one ship matters to the nation, before we have learned what it means to dwell on an island; and the luxuries of the hotel are given and taken as a matter of course. By morning the snow has changed to sleet, and stinging cold is the wind on the

near empty quays; the one cheering thing offered there being a grand story which is going the rounds, concerning the ramming of a U-boat by the mine-sweeping trawler, “Dorothy Gray,” the first feat of the kind. But is it true? The newspapers have said nothing. Still, everybody keeps passing it on, the more conscientious sort in whispers, and in strict confidence.

Alongside one of the quays lies an oldtype destroyer. She has been in action, but only with the North Sea in the courseof her patrol. Among other things, a. ventilator is crushed, her starboard rail is bent and twisted and her squat funnels, are pallid with salt. A group of her crew are furbishing up a torpedo, a wondrous bright and shining thing for so sombre a purpose, preparatory to replacing it in its tube. The few people on the quay are more interested, however, in a trawler which comes yawing in from the turmoil outside. She is from up Iceland way and has a welcome cargo of fish. But fish is not everything. Has the skipper seen anything of the Germans? No, he hasn’t; and he isn’t “fashing” about theGermans, decent chaps—most o’ them, any way—who wouldn’t bother a peaceful chap like himself except, maybe, for a bit o’ fish. Oh, ay; he reads the papers, at least once a fortnight, and he’s heard, plenty o’ the tales that have bein’ goin’ the rounds. But what’s a chap to believe?’ Let them that was mad enough to start it, fight it out; as for him, he’ll attend to his trawlin’. It is still the attitude, thequestion, of many. What’s a chap tobelieve? But the war has only begun. Attend to his trawlin’? We shall see!

The Drifters!—those funny little, slowgoing, wood-built steamers, with their h erring nets—what, in the names of Mars and Neptune, can they do? Ah, but what will they not attempt? For instance—if I may take the liberty of condensing two of Mr. Hurd’s inspiriting, nay, thrilling njarratives—on an April morning, in the second year of the war, a little fleet of British drifters is lying in the harbor of Havre. Hark to their' honorable names: “Endurance,” “Welcome Star,” “Stately,” “Comrades,,r “Pleiades,” “Pleasance.” Comes new» that an enemy submarine has been sighted outside. Nearly three hoursmust elapse ere the tide serves; then seaward they steam, find the likely placeand shoot their nets. It is their luckjr morning! Scarcely has “Endurance dropped the meshes when there are sign» that she has caught something big, and presently up comes a periscope with such force as to disable her rudder. “Endurance” sends up a rocket, its bang: an intimation and explanation. Skilfully the skipper pays out net, but hampered by the useless rudder, is compelled tolet go, and the U-boat, though enveloped, moves off. But the rocket signal has brought the other drifters closing in. They form a circle. The trap is shut. Arrives—in a deuce of a hurry, one may believe—the French torpedo-boat “Le Trombe.” She locates the captive, and drops three bombs. That does it. UB-26, badly damaged, comes up and surrenders. “Welcome Star” and “Stately” help to save the Germans. And that’» that!

The scene changes to the Mediterranean. It is 9.15 on a January night, off Cape Otranto. “Calistoga”—not a pretty name, but one can’t have everything— has just got her nets in position when such a strain comes that her head is turned round. Not so the head of her skipper, William Stephen, R.N.R. Firing a rocket, he slips the nets and gives chase after the indicator buoy. Half a mile away, the drifter “Dulcie Doris”—you wouldn’t think she could hurt anything! —slips her nets and joins in. So does “Evening Star,” lucky to be in the district. After a while, about five hundred yards ahead, the netted submarine breaks water. With her three-inch gun “Dulcie Doris” lets Austrian U-boat VI have three good ones under the conningtower, and “Evening Star” adds a couple. The submarine lists over and begins to sink; her crew take to the water. All are saved—naturally.

Alas, that it is not always thus. Attacked by Austrian cruisers and destroyers, blown up by mines, and bombed from the air, the toll_ of the drifters is grievously heavy. Yet they carry on—and the destruction of one U-boat means the safe passage of many a great ship. 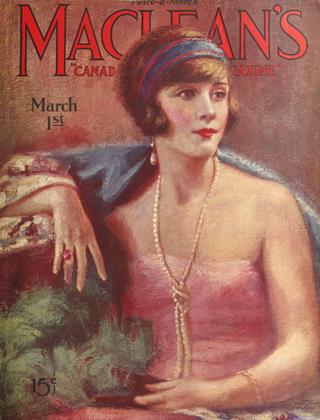