IT IS seldom that I use this little column of ours for “crowing,” but this time I would like to indulge in a few mild “crows” on behalf of MacLean s, to draw attention to the fact that in the issue which you are now reading there are three “star” contributors to the fiction feast—Sir Philip Gibbs, E. Phillips Oppenheim, and Irvin Cobb. Any magazine which is fortunate enough to assemble three such headliners in the one number may be assured of a maximum amount of that elusive quality, reader interest.

N PAGE 1 6 you will find the start of E. Phillips Oppenheim’s new serial, “The Great Samara.” You will recall the “Wrath to Come,” by the same master-writer, which was published in MacLean s about a year ago. In this serial Mr. Oppenheim -projected himself thirty years into the future, and found that, internationally, everything is changed, except —human nature. In “The Great Samara” he tells a vivid story of the Russian ten or twenty years hence, when the Bolshevist rule has ended, and the great Slav nation once again takes up its role on the stage of the world’s political theatre, as a factor in the stabilization of humanity. A fascinating stenographer-secretary, a girl in her early twenties, is the central feminine figure in this powerful, swiftlymoving drama of international intrigue, traveling swiftly from this continent to Monte Carlo and the Riviera, then on to the purlieus of Moscow and Leningrad.

'T’O BE quite candid, — and I hope Mr. Oppenheim does not see this—I like every other story that this great fictioneer writes. I always count on a good solid feast of enjoyment when he writes of international intrigue, of spies, and of his fascinating denizens of the demi monde and haute monde. When he writes of other than international events, then I must confess my interest tends to lag. “The Great Samara” is most emphatically one of these other stories.

A teen years old when his first story was published, and his first novel appeared when he was but twenty. He does not know why he began writing, unless it was something he simply couldn’t help. Writing, plunging into the untrodden world of romance, has never lost its fascination for him, and he

has between seventy-five and eighty books to his credit. When lunching with him some time ago in New York I asked him—if it were not a leading question!—if he could, recall how many books he had written. He replied that his total then was seventy-four, including collections of shorter stories.

'"THE last time I encountered Sir ^ Philip Gibbs was in the Hotel Adlon, in Berlin. I was sitting in the lobby waiting for tea, expecting as a guest the debonair Rothay Reynolds, of the Daily Mail. He failed to show up, and I found out later he had1 been called away on an important assignment to ‘ cover* an exhibition of the first of the “gliders,” which were then getting such prominence in central European engineless aviation.

As I began to fidget, and ten, fifteen and twenty minutes passed by, I espied a tall, dark, rather ascetic-looking figure standing aimlessly by the clerk’s desk. It was Gibbs, also looking for a guest who had failed to materialize.

CO WE had tea together, and it was one of the most fascinating hours that I have ever spent. This famous war correspondent was just then putting the finishing touches to his book, “The Middle of the Road,” and he described the adventures through which he had gone to procure, at first hand, the wealth of material which went into this most unusual novel. In fact, as most of those of us who have read it will agree I think, it is essentially sublimated reporting, combined with some of the alluring technique of fiction. I asked Sir Philip, then, if some time he could not arrange his contracts so that MacLean s could get some of his yarns, and now the first of these has materialized: “The Harmonious Child,” a complete story which you will find beginning on page 1 1.

MOT so long ago I was lunching at the famous “Dutch Treat” Club in New York, with an editor of considerable note, and he told me he had' arranged for a splendid new story by Irvin Cobb.

Why can’t MacLean s get the Canadian rights, to publish simultaneously?” I inquired.

“Why, I think that could be arranged: let’s see Cobb about it.”

So turn to page 22 and you will see the result: “The Principle of The Thing.” 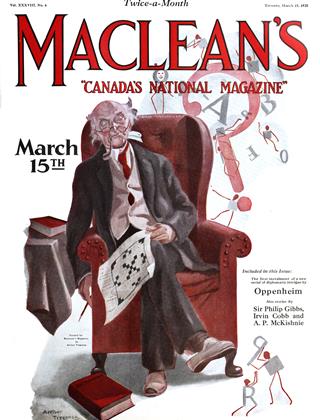