RAILWAYMEN generally are inveterate practical jokers, but they enjoy a trick with themselves in the role of victim just As much as if the laugh is on the other fellow. In the nature of things Canadian railwaymen have .considerable contact with their brothers south of the line and many a good story finds its way in both directions across the border, as the following tale will illustrate.

Years ago George Gould was making one of his trips as president of the Missouri Pacific.

His private car was laid out on a siding for some reason, and he got out to stretch his legs. An old Irishman was tapping the wheels. Gould went up to him.

“Not worth a dum!” was the Irishman’s prompt reply. “Well, how do you like the car?” was the next question. “It’s good enough for de wheels.”

“What do you think of the road?”

Gould looked at the old chap, in silence, for a minute. “Maybe you don’t know who I am?”

“Shure I do,” retorted the wheel-tapper. “You’re Jarge Gould, an’ I knew your fadder whin he was president o’ de road, an’ be gob he’s goin’ to be president of it again.”

IN THE early ’eighties when the railway was a new thing to the inhabitants of Perth, Ont., a number of the men were wont to assemble on the station platform in the evenings to listen to “Dinny” McElligett, the station baggagemaster, who, while standing with his back against the building and smoking his short clay pipe, would give snatches from the history of his life.

One evening he regaled his company with a list of the different railways in Canada and the United States upon which he had been employed, his various occupations, and the period of time each had enjoyed the benefit of his valuable services. As he proceeded he was somewhat disconcerted as he noticed that John Malloy, at that time the section foreman, was making entries in a note-book and working out certain mathematical calculations. However, he still talked on, little suspecting how deep a ditch John was digging for him.

When Dinny began to expatiate upon the value of his services John interrupted to enquire if he was quite sure he had not overlooked mentioning any of the railways on which he had worked. Dinny thought not.

“And how ould was you when you stharted out on your famous railroad career?” asked the wily John.

Upon being informed that he started as a water-boy on an extra-gang at the early age of twelve, John added this number to the sum of his mathematical labors and said: “Well, Dinny, I find according to yer own account that you have reached the ripe ould age of 119, but ye don’t look ut!”

AT WINNIPEG one day, an intoxicated individual - was having great trouble in negotiating the stairway ■from the station to the train shed above. A “red cap” happened along and with considerable difficulty succeeded rjn getting the bibulous traveler aboard the train and ,comfortably seated. Across the aisle of the car was ¿mother passenger to whom the drunk remarked:

“Thash what I call real Shee P.R. shervish. A fellow drinksh a little too mush, a ‘red cap’ appearsh on the ,sheen and hepsh on the train. Can’t heath Shee P.R. By th’ way, where you goin’?”

“I’m going to Toronto,” was the reply.

The Habit of Firing

FORTY years ago Billy Somers was a valuable man to W. R. Callaway when the latter was the passenger representative of the Canadian Pacific at Toronto, and doing much to popularize the new railway. The service at ,-that time was somewhat crude and naturally complaints were made by the company’s patrons.

When a complainant appeared in person he was easily disposed of, for it mattered not the nature of the complaint, no time was wasted in investigation; the statement was accepted at its face value and responsibility Admitted. Somers was brought ir and told in the presence of the complainant that he was personally to blame and

he was summarily dismissed from the company’s service. At times the person making the complaint would ask that he be given another chance, but Callaway would not yield to such appeals, affirming that no slackness, indifference or carelessness would be tolerated, and that in the interest of the service Somers would have to go.

features will begin shortly, by Arthur Heming and W. J. Locke. Each is a head-liner, but there is a great contrast between their respective appeals. “The Living Forest,” by Arthur Heming, will commence in July. It is an epic of the Canadian North. “The Great Pandolfo,” by W. J. Locke, is a story of sophisticated London. It begins in the June i issue.

The complainant would go away greatly impressed with the new company’s determination to have efficiency at any cost, and Bill and Billy would then put on their hats and cross over to the Rossin House to have a cigar together. Billy was fired once or twice every month.

ONE Christmas Eve a Canadian Pacific officer, a Western Lines bachelor, sat in his lonely quarters thinking of the festive season. He was in a retrospective mood, and there passed through his mind visions of the Christmases of long ago around the gift-laden Christmas tree. He remembered his petitionary letters addressed in a cramped little hand to Santa Claus, and also his letter of thankful acknowledgment. He thought lovingly of the dear faces of those far-off days.

And when he remembered that only recently some of his pals, AÍ. Stevens, Frank Lee and others, had forsaken the ranks of the bachelors, he was simply overpowered by loneliness and could stand it no longer. So, throwing on his greatcoat and hat, he went out into the cold and cheerless night. He wandered down Main St. towards Portage Avenue, and upon reaching Jerry Robinson’s went in and bought a pair of lady’s silk stockings, took them back to his room, hung them in front of the fireplace and attached to them the following note: “Dear Santa Claus;—Please fill these for me before Christmas.”

The Dogs Were Troublesome

MANY queer letters are received by Canadian railway officials from persons who contemplate settling. The following is a specimen. It is a correct copy, except for the address and signature:—

Before I finally make my arrangements for leaving England in a few months’ time, and as it all depends on what you can do for me on the subject of which I write, I must ask you to kindly reply per return.

I purpose settling in Canada (Alberta) with my daughter and maid. I shall send out about three tons of furniture. My difficulty is my three dogs—two tiny dogs (toy and a valuable greyhound). None of these can I allow to be put in the luggage van. If my brother meets me at Montreal there will be four and perhaps five people—certainly three. Can you give me a carriage to ourselves, 2nd or 3rd reserved, and would you allow me to have my dogs with me, or could you allow me a sleeping carriage for three or four at a certain charge (please name), whereby we could remain in it for the five days journey? I do not make any arrangements for leaving England unless I can have my dogs with me in the train—they are never left without either one or the other of us. I will give a guarantee, should you have any cause for complaint in any shape or form, to pay you any damage, but they are all three drawingroom dogs, the two small ones on my lap, and the greyhound on the sofa at my side. They are perfectly clean, and I can send you a celebrated veterinary surgeon’s certificate that they have neither fleas nor anything in the least the matter with them. But if they were put in the luggage van they would die of fright. And if you cannot agree to my request then I cannot go, for which I am sorry, as I am very anxious to join my brother in Alberta, Claresholme: but my dogs’ lives can’t be sacrificed. Will you kindly tell me how long stoppages there are for getting out for a run, and where and how one gets one’s food, and how does one change into the sleeping berths? And how long a distance of days from Montreal to Claresholme?

I think you will be able to arrange this for me. If it is possible I should prefer to have a sleeping berth for three or four and remain in it the whole time, for I dread the journey. Then my dogs would remain with me. I can assure you, you would have no cause for complaint. I always manage to keep them all with me by writing to the managers and getting a reserved carriage. Then, there are no passengers to object. There will be the fares for three, my little girl, my maid and self, and three dogs. Kindly name fare, third and second class, and state accommodation you are willing to give me. As my brother may meet me there may be four, and perhaps a little boy nine years old—certainly three people.

In answering state clearly, please, the exact cost and times of stoppages, and what stations the customs are. As you will not receive this for fourteen or fifteen days, and the reply will take another, this means one month. May I ask a reply within a week of your receiving it, making it five weeks. I shall do nothing until I am satisfied about my pets. If you can’t help me then I can’t go! Thanking you in anticipation,

It is not likely that she ever came across.

»EFORE the construction of the spiral tunnels between Field, B.C., and the Great Divide it wTas a hazardous adventure to descend the steep grade, four and one-half feet to the hundred, with a freight train.

Pete Gilhooley was a new brakeman, and before starting out to help in the work of controlling the speed of the trains on this portion of the line he was told that his rate of pay would be three cents a mile.

On his second day the train on which he was traveling got going so fast that it could not be controlled, and in railway parlance one man after another “unloaded” until none was left except the conductor and Pete.

“Better jump and save yourself!” the conductor shouted just before he sprang clear.

“Jump, is it?” responded Pete. “Not on yer loife! Jump—an’ me runnin’ about tin modes a minnit an’ arnin’ three cints a mile? Divil a jump for Gilhooley!”

These “Stories from Rail Life” are selected from a forthcoming book by Alfred Pnce, to be published this spring by Thomas Allen, Toronto. 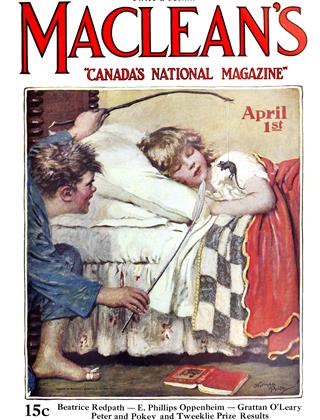