YOU cannot be in the company of a person who has a hobby without soon learning about it. The man or woman who is an ardent collector, whether of pewter, old playbills or postage stamps, is like Mount Vesuvius, always bubbling over. A bridge enthusiast who remarked that people who did not play bridge were deadly bores, would find many who agreed with her. Similarly a clever woman, the author of widely-read books on floriculture, stated she dreaded being paired off at dinner parties with someone who could not talk about flowers and gardens, as she cared to discuss nothing else.

For increasing the joy of life there is nothing quite like a hobby, whether it be outdoor sports, chess, music, pottery or Persian cats.

BRIEFLY a hobby that can be recommended to all, be they resident in city, town or country, is the compiling of a book of clippings. To each one of us there is some special subject that appeals strongly. So find out what most interests you, and when reading magazines and newspapers bear it always in mind. You will be astonished to find how many articles you come across on your pet topic, and more astonished still at the great amount of knowledge you will gain. By collecting these you will become an authority, and should anyone venture to dispute your assertions on your own particular subject, out comes your scrap book and your statement is proved.

Here are some examples of scrap books that have been fruitful sources of pleasure and profit to their compilers.

For a few years before the War, and during such periods of it that he was not in the trenches, an Irishman who enlisted in Toronto, collected every bit of information and comment he could find on the Irish question. These articles and editorials he pasted neatly in a loose-leaf book, which he carefully indexed. When war ended, he returned to Canada and started a fox ranch. But disease unexpectedly breaking out, among his Reynards, caused them all to die. Absolutely cleaned out, he looked around for some means of raising enough money to make a fresh start in a city. Remembering the admiration a member of Parliament had expressed for his collection of Irish data, he offered to sell him the book, and the man was glad to purchase it for $400.

A woman, who served gallantly in one of the auxiliary forces, made a collection of war poetry between the years 1914 to 1924. It is so interesting a book that it is in requisition by her friends most of the time.

A SCHOOL girl who delighted in funny stories, jokes and light verse, collected all such she could find in the current magazines, and arranged them in a small blank book. A man who spoke much in public once borrowed her little book, and on returning it said he found it so useful he would willingly buy it for $50. But she preferred to keep it herself.

A woman artist has found time to make several collections. One of these is devoted to magazine covers. It makes a strikingly attractive book, and some day will be valuable as showing current art of the times. Another of her collections

is devoted to colored fashion plates,which she has later extended to include costume prints. As she started getting these pictures together as a child, they show many startling changes in feminine dress. Her keen pleasure in these pictures has made her devote much study to the subject, so that she has made herself an authority on costume and design. A.s a result she is in great demand as a lecturer on these and kindred topics. In giving these lectures she illustrates them with the pictures, which are mounted separately on mats of uniform size.

One of our Canadian women poets, in collaboration with a literary critic, has made a collection of contemporary verse from magazines and newspapers. The result is a large number of poems of great variety that are to be brought out by an American publisher in book form. This is doing good Canadian work, as some of these efforts, being the product of unknown writers, would otherwise be forgotten and lost.

A well-known Canadian writer, whose books have been translated into almost every European language, and who specializes in animal stories, has for years collected all the anecdotes she could find about domestic pets and uses these with excellent effect in her writings.

A girl who loves beautiful furniture resolved that if she could not afford to indulge in it she could at least learn about it. So for several years she cut from leading art magazines pictures of furnished interiors. These she pasted on heavy buff paper and arranged them in groups, each group devoted to a certain kind of room. When a chance came for her to study interior decoration in New York, she took her pictures with her, and found she had easily and pleasantly absorbed much knowledge from her selfimposed work. Her collection is not only in demand by the other students, but has been the object of praise by her teachers. So that she did valuable preparatory work in getting together the series of illustrations.

A young journalist has lately started collecting anecdotes about well-known persons, together with their pictures. As she advances in her profession and perhaps rises to the dignity of an interviewer, this material may prove of great assistance.

Those who are devoted to the theatre —be it the silent drama or the legitimate —or to concerts, have a field ready for their efforts. Popular magazines will yield them pictures of their favorite actors, actresses and musicians, while current reviews of plays and films and criticisms of concerts might profitably be included. Such a collection would gain in interest as the years went by.

Native art, in the form of reproductions of pictures and sculpture by Canadian artists, is a subject both patriotic and inspiring. Canadians indeed might well inspire a number of collections. Think how priceless a book wrould be that contained all available facts and editorials on the tariff, or on the timber question! Then immigration is another large subject that would repay the patient compiler. Data on such matters of public interest might prove a great help to men in public life, or to a reference library, should the compilers wish to dispose of such collections. In short, there is hardly a taste that cannot be served by the clipping and pasting habit, which in its most simple form might take upon itself the preserving to posterity of Jiggs and Maggie. 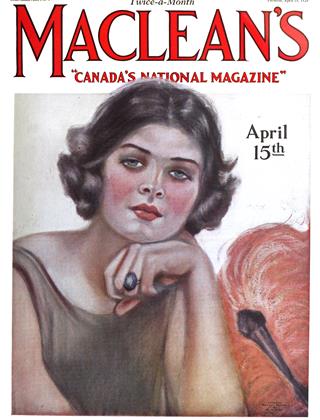