This is one of a series of animal yarns—all true—by this masterly and outstanding Canadian writer.

THERE is a reciprocity of mental benefit between man and animals in an association, but it depends almost altogether upon the man, for almost any animal will react to kindness and considerate treatment. There is almost more difference between urban and suburban man than there is between the animal in freedom and in domesticity. Find out that particular breed inherited temperament, and consider his qualities, not with a club, and you will find the evil becomes subservient to the good.

I had a thoroughbred horse, St. Lazarus; he wasn’t much of a horse as a winner, and he was by Lazarone who, though he won either the Brooklyn or Suburban, wasn’t much of a horse either. St. Lazarus became my horse because I agreed to buy him if he won a race that he was entered in that day; he won it, but he never won another. But it is about his temper I wish to speak. The trainer who was training him for me refused to keep him longer because he had turned a savage; he tore the clothes off the boys who attended him; he savaged other horses at the start or finish of a working gallop.

I took him out to my stables in Georgetown, gave him a roomy box stall and, through the day, the run of the yard. He was a big, handsome chestnut and thought no end of himself. He would tear around the yard squealing and kicking, and daring the whole countryside to come on and fight. His tuition didn’t take long, and I never laid a whip on him. The only castigation he received was one, good, thorough rib beating with the handle of a fork for having nipped me in the thigh in his stall. He got this with his head quite free, left entirely loose to defend himself if he could, and I think he appreciated the fact that it had been a fair set-to.

His schooling was somewhat along these lines; at first when I went down to the yard to shoo him into the stable he threatened to annihilate me; he reared on his hind legs, shook his head, gnashed his teeth, and tore around and around, and defied me utterly. I got a dish of oats and showed to him, but he laughed in derision—he was well fed. All right. I closed the stable door; I went down again about six o’clock, opened the doors, and then, as before, chivied him about the yard—no result. I closed the doors again, and about ten o’clock that night —it was cold, too—I heard him out in the yard calling to me to come down and let him in to his nice warm stall.

I showed myself at the back window against the bright light, to let him see how comfortable I was. I let him call for nearly an hour, then I went down with a lantern, opened the stable doors, and he walked in, as meek as a lamb. I gave him his oats, rubbed my hands over his back and quarters, and left him. That one experience cured him. If he didn’t think some curious form of instinct conveyed to his mind the advantages of being a good fellow.

After that all I had to do was open the stable doors, snap my fingers, call to him, and, perhaps with a playful teasing round or two, he would come in.

I always carried down a couple of apples in my pocket, and he would come up to me, give me a little bunt on the side of my jaw with his velvety muzzle, as much as to say, “Come on, let’s have the apple; you’ve got it.”

Now this was all a matter between St. Lazarus and me, for he still retained his

domineering and dominative nature toward others. A farmer was bringing me a load of hay, and had driven down the side drive to the gate that gave entrance to the yard; but beyond that he daren’t go—-St. Lazarus was looking after that part of it. The man came to me, saying there was a raging devil out there in the yard. This was not a bad description of St. Lazarus’s attitude; he was out for strife. But when I went down and opened the door of the stable he entered without any trouble. The man was astonished; no whip, no club, no bridle, just, “Come on, old boy.” Rather curious, that.

AS THOUGH it had been intended for me to associate A with horses of doubtful temper I can relate another conquest, even if it does sound somewhat boastful.

When I was with the Maharaja of Vizianagram in India, I was allotted a splendid yucca bungalow in the cantonments, most completely furnished, a horse for driving, and almost, unbelievable, an American buckboard. I was assured,, however, by the Maharaja’s secretary that possibly there was no vehicle on earth of which there was not a specimen stored in the Maharaja’s trinket morgue. It simply meant that when any European came with anything to sell the Maharaja bought a dozen or so. and had them stored in the vast building known as the Morgue. A Maharaja is considered fair game to an English “indent man”; that is to say, one who takes, orders in India for English goods. So that the collection in his morgue beggared anything that could possibly be imagined.

Any or all of the equipment to be found here was freely at my service.

In addition to the buckboard, if I wanted to go out to Bimlipatam I was given a carriage, and a dak was set—that is, a pair of horses was stationed every four miles of the sixteen, as a relay. But I wanted a riding horse and conferred with ex-Sergeant-Major Gill who was the Maharaja’s master of the stables and commander of cavalry. He was consideration itself and assured me that my wants should be met.

The result of this was that in two days a handsome gray Persian stallion was brought to my bungalow in the early morning by a syce; the syce took it upon himself to advise me to be careful of the horse. Of course any man who has had anything to do with horses is full of that very thing, caution, with a new one, but he mustn’t let the horse know that; if the horse knows intuitively that you are afraid it is a case of “good-night.” To tell the truth I wasn’t a bit afraid of the Persian, for he had a lovely broad forehead, big full eyes, not showing a bit more white than he should, and his ears stood up erect like query marks, wondering what I was like.

WELL, we got on famously. In about two weeks the Persian—I called him Shahbaz—would come up the eight cement steps to the verandah, and so on into the dining-room that was also cement from the ground up, eat the bread off the table, not upsetting a glass, and when I turned him about, and, putting my shoulders against his hind-quarters, pushecj him down the steps, he would only pretend to reach his long neck around to grab me by the leg. I never had any trouble with him, though I learned, quite privately from Gill, that he had boned him out of the Queen Mother’s private stable for my use; and, why not, for nobody would ride him, accounting him a bad horse.

After I left there the wife of on e of the officers of the regiment, having admired Shahbaz, put in a petition for him and got him. I had no very definite account of what happened to this latest possessor of Shahbaz. The records are dark in this regard, but I judge that the lady was not as successful as I in appealing to his better nature, In any event all I was able to learn of the result was that she rode him once.

In later issues Mr. Fraser will again appear uñth so-me of his delightfully virile stories of the track, where his surprising knowledge of animals and theirways—and his uncanny insight into human emotions, and impulses, stands him in such good stead. 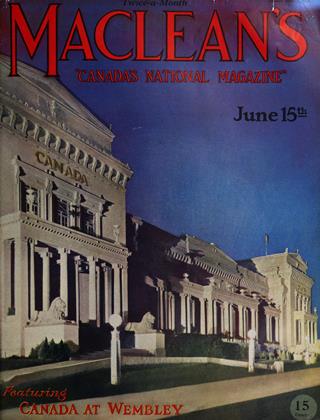