WHY is it that the kitchen of the home, the room in which the wife must spend several hours daily, is the one room where makeshift is deemed sufficient? Why is it that walls and woodwork are so frequently finished in dark shades, blinds hung with the green side in, and a single stool or straightbacked chair found to be the only seat provided for the woman whose leisure moments should count for complete relaxation?

Builders to-day are giving more thought to the kitchen, but there are many houses which are not new, the kitchens of which are enough to make any woman’s heart sink at the thought of trying to work efficiently and happily in them.

Not so very long ago I was house-

hunting, and finally, after weeks of searching, discovered a little house which seemed to be the veritable “House o’ Dreams”-—until I was shown the kitchen. It was very small, but that was of secondary importance. The floor was painted a dull drab shade—that particular tone which always appears to be dirty. There were no curtains at the window and a dingy shade was hung crookedly with the dark side in. The walls were painted a dark maroon shade, and the ceiling, too, was maroon with a stencilled design in pale blue, while the woodwork was finished in the same shade as was the floor.

“This paint doesn’t show the dirt,” boasted the woman who was in possession,“ and even if the walls do get pretty much steamed up you can’t see it.”

BUT we bought the little house, and the kitchen received at least as much attention in the scheme of decoration as did any other portion of the house. The walls were washed, given a coat of neutral-colored paint and then were covered with a washable tile paper in white and dutch blue, with an all-white ceiling, white enamelled woodwork and a gay blue and white block linoleum. White oilcloth, waxed, covered the shelves of the kitchen cupboard, which had glass doors, and at the casement windows I hung ruffled curtains of blue and white checked gingham. The old torn blind was taken down and not replaced but a sturdy awning was hung outside the window to keep the room cool on hot summer days. A low white enamelled rocking chair with a cushion of blue denim gave promise of pleasant moments of rest while waiting for the watched pots to boil.

Nor did I stop there. Because I was going to spend approximately three out of every sixteen waking hours in that little room I was determined it was going to be as cheerful and pretty as was

practical, and to that end I filled the window with potted plants (it happened to be an especially deep sill), made room for a row of books on the shelf below my spice jars in the open part of the cupboard, and above the tiny shelf which held my alarm clock I hung a round mirror so that when there came the inevitable rings at the door bell I might be assured of a presentable appearance without taking a stealthy trip upstairs or to the mirror in the china cabinet.

A Haven of Beauty

FOR eighty-five cents I purchased a rubber mat to place before the sink where I would be standing to wash dishes and prepare vegetables. I preferred rubber to the gayer chintz or rag rugs sold for kitchen use as these will often travel with one in a moment of haste, and the rubber grips the floor and is easily kept sweet and clean. An enamel soap dish, sink strainer and nickel racks for hand and tea towels completed my purchases and I surveyed the little kitchen with pride and satisfaction.

The woman who had inhabited it before me would not have recognized her maroon-colored horror in my gay, light little kitchen. It was bright and cheerful, it was comfortable and practical; and, best of all, it was so white that every bit of dirt would show, and showing, be speedily done away with. I shuddered every time I thought of preparing food for myself and family in a room so decorated, that grease and dust and the dirt which accumulates if not constantly watched, would not show.

It is a pleasure to work in that gay little kitchen, and I am sure that if more thought was given to the kitchen and its equipment there would be less distaste for kitchen work. Amid cheery surroundings, sunshine, plants and one’s favorite books, to say nothing of the homily ticking of a clock, there should be no room for discontent. 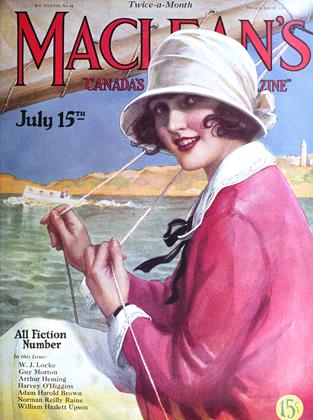