PERHAPS one of the greatest temptations which the struggling modern novelist experiences is that to “jazz” his book—to put a little of “sexy pep” into it to make it talked about and increase its sales on the news-stands. Much is said and much is written about the reputations as “best sellers” built up by novels whose main claim to attention has been risqueness, and there undoubtedly has existed a school of critics, especially in the United States, whose efforts would seem to have been directed toward pushing the interests of sexy books by the indirect method of giving the widest publicity possible to their explorations beyond the pales of decency.

There are, however, indications that the day oí the “sexy” book is drawing to a close. Certain it is, at any rate, that there are few authors who have made lasting reputations from their risque tendencies alone. A few—and they are a limited few—have made reputations in spite of the risqueness of their products.

Horace Annesley Vachell, writing for the Daily Mail (London), expresses the opinion that tainted fiction is disappearing, holding that the great general average of authors of to-day are above “writing down” to their public. He puts it this way:—

Sanity implies soundness. Our greatest fiction is sound at core. And as much can be said of our “best sellers,” otherwise they would not appeal to an immense public that is essentially sane.

But there seems to be an increasing tendency on the part of some of our younger and more gifted writers to introduce into their work what is unsound. This means that there is a demand for tainted stuff which we find in certain

plays, films, and novels. Possibly the supply has created the demand.

Much of this “stuff” is pathological, out of place except in a medical treatise; much of it is ugly and therefore inartistic.

How comes it that a few young men and women are straining their sprightly wits in the rather grotesque attempt to ally them to madness? Do they confound violence with strength? Have they lost their sense of smell? Soundness in a great wine includes sweetness. I have read one or two novels lately that simply stank. Is there a not negligible public that really prefers the smell of the midden to rosewater?

Sanity ought to be the touchstone of culture and conduct. If a writer, however clever he may be, is unsound, he fails to inspire conviction in his readers. It becomes impossible to take him either lightly or seriously. Whether his object be to entertain or instruct, we feel that he is squinting at life, regarding it through the wrong end of the telescope.

After all, in spite of sporadic outbursts, we are as a nation pre-eminently sane. Long may we remain so. And most of us expect from our writers self-expression. Really, the novelist can’t divorce himself from his work. The right sort puts what is best in him into it.

Some of the younger men are showing great promise; they have aroused in us an expectation that they should take heed not to disappoint. Let them see to it, in their owm interest as w'ell as ours, that their wares are not offensive, because, inevitably, we shall damn them as being offensive too. We have a standard of common decency and sanity. Let youth respect it. 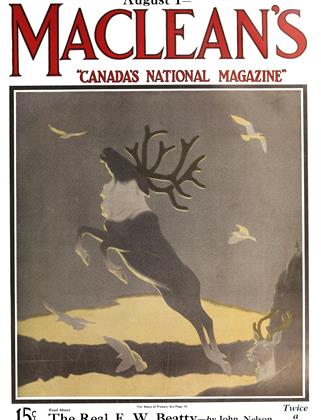