No. 4, A French-Canadian Adaptation

NOWHER on the continent is there finer native architecture than that long, spacious, fundamental type which was evolved from the first days on the roadsides ot Quebec. Canada is rich in havins in her

possession those lovable farm houses of the Quebec countryside. As an architectural and picturesque basis for the suburban home, large or small, the principle is wonderfully adaptable in present-day construction, not only for beauty of simple variation, but for the finest effects of interior space and exterior setting. There is a country home at Dorval, near Montreal, which is perhaps as interesting and home-like an adaptation of the type as can be imagined.

True to its type to the line, it has yet been varied in its exterior development to create just that suggestion of individuality which should be the aim of all sincere adaptation. The walls of brick and concrete block have been given a rough-cast finish in Portland cement mortar, topped by a gray shingled roofing. The stone trims, at copings, quoins and belt courses, are of Montreal limestone. Then, in rich relief against this neutral background, stands out a panelled frieze just beneath the eaves. (The detail of the frieze is most original. It consists of rather highly colored placques against a dull green background, each design cast from a special model, and the whole taking in signs of the zodiac, dates of significance, the owner’s initials, and other

symbols of special personal import or association.) In its typical long low lines with the quaint peaked dormers so characteristic of the habitant dwelling, the house is reminded of new days and new ways again when this same color effect is carried to the dormers themselves, where a medallion is set in relief against a gray background in each. The shutters, of rather a vivid green, are given an interesting variety of detail as well. At front, panelling is varied; at rear, in addition to the panelling, the extreme shutters of the second floor differ even in outline, and the peak of their dormers is modified to an arc. Such variety is extremely wholesome where straight repetition of windows—as is characteristic of this type—might be-

come slightly tedious. Note at front the shrine-like cornice at the extreme junctures of roof and wall. Is it not suggestive of the influences of the Quebec countryside?

Another happy variation is the doorway in its Colonial detail of slender columns and delicate wooden cornice.

PASSING through the vestibule, with its stone floor, the heart of the house is reached by a hall which extends directly to the garden at back and opens upon the terrace. At right the house-depth livingroom is notable chiefly for its magnificent fire-place. Here, built in as a part of the

white enamel mantel, is a fuel cupboard which may be filled from outside a most unique and ingenious feature. The fireplace is in every sense beautiful. Note its simple expansiveness, the clarity of its mouldings, and the harmonious light tone

monious light tone of its stone facing. This room is amply lighted on three sides, having access to the side garden by a French door beside the fireplace. Its walls are papered in neutral tint, cheered by the white enamel of its wood trim, while the chintz of its upholstery and hangings adds the required note of color. It is a delightful family room.

The hallway is carried out with a good deal of atmosphere in an old-fashioned type of wood panelling, while its ceiling dips in a low arch above the stairway. Stepping directly across it from the living room, is the large dining-room. It gives on the garden in a broad pair of French doors through which the fresh air from the lake (only two hundred yards away ) drifts in with the Quebec sunshine. Both the dining-room and living-room are finished in rather high baseboards of white enamelled pine, but the dining-room boasts a plaster cornice directly at ceiling which carries a very rich grape-vine frieze. Rough plaster walls, painted a neutral shade, make an admirable setting for the opulence of the Spanish Renaissance pieces the room contains. A blue leather brass-nubbed facing on the swing door to the pantry gives an effect of

panelling in keeping with the general period tendency of the room.

being lighted on two sides, and is provided with a large closet which permits of use as a bedroom if needed.

Another interesting feature of this floor is the fact that this sitting room and its adjacent bedroom open on a little hall of their own raised by four steps from the level of the other.

screened by shrubbery. The kitchen window also looks out into this screened area at the side. A stairway from the pantry leads below stairs to a basement, and above to sleeping quarters.

A TAKING feature of the bedroom j\. floor is the huge hall space, provided with two windows looking on the front grounds, forming what might almost be a sitting room in connection with the two master bedrooms, and possessing endless possibilities for decoration and use.

There are two baths on this floor, one of which is shared by the two larger bedrooms, the other at left of stairs, convenient to sitting room and spare bedroom. This third bedroom is also provided with a wash basin.

The bedrooms all face on the back garden and lake, receiving full benefit of

THE provision of closet room on this floor, I may add, is a study in itself, and a close following of the floor plan in this detail will repay your interest. In the first place, the large master bedroom is furnished with two double-doored closets. Going from there into the main hall is another double closet between the windows. Going further on to the little passage to the stair, is a single closet. (A stair closet is always particularly convenient—especially if there are children in the house.) In the smaller hall space commanded by the sitting room and guest room, is a luxurious linen cupboard. The centre bedroom is equipped with one closet as big as a small room at left, and a smaller but certainly ample enough press in the right corner by the window. The guest room is also provided with two closets of much more than ordinary size. The bathroom connecting the two master

the» view and air. That one which lies directly over the living-room and the full depth of the house, overlooks the front and side gardens as well.

The little sitting-room on this floor is also planned with ample window space,

bedrooms is provided with another— roomy and deep, and cupboarded and shelved for linen and other necessaries. Next to proper provision of baths in a house, I think there is no detail of space so important from the point of view of the

Attic and Other Details

THE third floor or attic has been finished and furnishes sleeping quarters for several servants. It is reached by a

United States, still abounds in Canada, where it can be purchased at a figure that recommends it to the builder of moderate means. Especially is pine recommended for enamel, stain or varnishing—in fact, it requires these finishes for lasting durability, as without them it may be susceptible to rot by damp. So finished, how-

covered stair, opening by door beside the second floor sitting-room. This floor is ventilated by windows facing the back or lake side of the house as well as at side.

The bathroom floors throughout this house are of black and white tile. The basement is finished with a laundry, storage rooms and furnace room. The hot water heating arrangements are augmented by a garbage incinerator just off the furnace room—a great convenience as well as a wise sanitary precaution in a suburban neighborhood where refuse collection is unknown.

Wood Finishes And Their Virtues

THE flooring in all rooms is of oak, while the panelling and other woodwork is of enamelled pine. Pine is a wood which, so far, has not been touched upon in these articles as an interior finish, but which deserves the knowledge and appreciation of all prospective home-builders. An inexpensive wood, it is yet one of the most durable and finely grained, particularly lending itself to enamelling. A tribute to its qualities is paid by wood-

ever, it is one of the peerless interior The Grounds

CERTAINLY this most original home has been given its proper setting in the development of its approach and gardens. Set back from the main road a distance of perhaps two hundred feet, it is reached by a drive, passing the gardener’s cottage and garage, curving up through the property so as to turn at right angles and directly front the house. A foot path takes another direction through the property toward the house, ending at the drive facing the door. On its way it divides an iris and perennial bed, and looking through the maples, gives one a view of the tennis court, a little distance off at the right. Beyond, still to the right, the property is bounded by a private roadway tree-bordered and leading straight to the lake. About the house are beds of hardy flowers and flag stones leading toward the back garden. At the rear of the house a terrace extends to a rockery sloping down to the formal garden and lawn which

carvers the world over, who prefer it to any other wood as a medium for their work. White pine especially, because of the soft even grain of its light wood, has become one of the most important economic species on the continent, as well as one of the most valuable. This member of the pine family, now almost exhausted throughout the timbering country of the

sweeps away for several hundred yards to the lake—a refreshing vista.

Grounds and house alike are arresting for their beauty, originality, livableness and situation. Indeed this is one of the most attractive homes it has ever been my privilege to consider, for it abounds in many practical features and in typical adaptations of great charm. 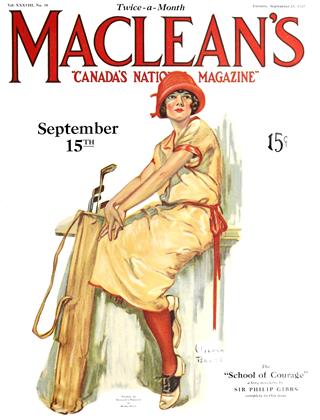