business men at the turn into a New Year, I would do so with one word—Confidence.

Not in many years has Canadian business so confidently bid good-bye to a passing year and entered into a new twelve-month in more hopeful spirit.

When all is said and done, in the main, 1925 was good to Canada—“good,” that is, in the economic sense, by reason of a tremendous crop with stimulating revenue possibilities, by reason of an accelerated and far-flung international commerce, and by reason of momentous development of those natural resources for which we have long counted Canada potentially great.

Who are some of the men who have voiced to the world their confidence in Canada’s economic progress?

There is for one, Sir Henry Thornton. In England, in the closing weeks of last year, he made the declaration that “Canada is on the threshold of great prosperity.” A newspaper critic quickly twitted Sir Henry with being “an irrepressible optimist,” but his words impressed those to whom he spoke in England, by reason of the fact that as president of the Canadian National Railways he should know something ofwhat he talks—he holds a key to one of the two great transcontinental units and is thoroughly informed in trans-Canada traffic, than which there are few surer indices of Canadian business conditions. Sir Henry, of course, is amply supported by traffic figures, which, while indicating lower gross revenues for the two railways, show important net revenue gains. For that matter, the C. P. R.’s gross receipts of $124,000,000 for the nine months of 1925 compare with $129,000,000 in the previous year; while the C.N.R. gross figures of $169,000,000 compare with $172,000,000—and the three important months, following a remarkable western wheat out-turn are yet to be reportîd upon. Rather significant bookkeeping!

THEN there is Sir John Aird, retiring president of the Canadian Bankers’ Association, who but lately gave it as his opinion that “times in Canada, now, are better than at any time in the past two years.” Encouraging? Yes—but en-

couraging with sound reason, for it may be supported by banking figures which reveal that savings deposits in Canadian chartered banks aggregated $1,268,554,000, on September 30, last, compared with $1,177,428,000 a year ago. This would work out at $140 per capita, which is a healthy indication of individual thrift in Canada. Bank clearings—another important barometer of business conditions -—total $1,671,835,000, according to the latest available monthly figures, and these suggest a full tide of industry and commerce, which bank loans, amounting in the aggregate to $903,000,000, further substantiate.

Sir Vincent Meredith, Bart., president, and Sir Frederick Williams-Taylor, general manager, at the mid-December shareholders’ meeting of the Bank of Montreal made significant contributions to the publicly-expressed opinions concerning Canada’s future. “I am more convinced than ever,” declared Sir Vincent, “that the country actually and potentially possesses such wealth and opportunity that its future cannot be denied, and I deprecate most strongly expressions of opinion based upon local

conditions and individual business which are perverted into pessimism as to the country’s future when no real foundation for such a sentiment exists.”

NO NEED for “straws” to determine which way the trade winds are blowing! An expansion exceeding $300,000,000 in the aggregate revenues of our basic industries places the country in an enhanced position at the outset of 1926. Canadians—from almost any angle you may look at the situation—seem certain to have increased spending power in the coming year, the result of 1925 production. And what is more, in the forecast of The Financial Post, “Basic conditions throughout the five main marketing areas of the country are such as to warrant the forecast that 1926 will be even a more productive year, and that the spending power of all the five areas will continue to expand.”

The Financial Post Survey estimates that gross revenues from all Canadian industries for 1925, as compared with the known figures for 1924, will be as follows:

UNDENIABLY, the chief reason for confidence in the coming year lies in the nation-wide good feedng brought about by the happier lot of the farmers. As the Royal Bank economist recently expressed it, “The maladjustment between industry and agriculture has during the past twelve months been mitigated if not entirely relieved and the highly satisfactory crop returns now indicate that the purchasing power of the farming community will be greater than for the past five years and more widely distributed.”

Which is just another way of informing all and sundry that agrarian prosperity in this Dominion is fundamental to general business prosperity.

Equally important is Canada’s foreign trade, built up during the year to notable proportions once more. Exports totalling $1,170,475,000, for the twelve months ended September 30, last, compare with $1,086,177,000 for the same period of 1924 —an increase of nearly eight per cent. This is very complete evidence of aggressive marketing of Canadian products and had the effect of rehabilitating our “balance,” and restoring the Canadian dollar to an international position of par— as a matter of fact, fractionally above par on the New York money market.

AT LEAST three elements of our na■ tional economics developed increasingly vital force during the past year, giving every promise of assuming further importance in national business from now on. For one thing our sales of pulp and paper have reached a level where United

States’ monthly production has been exceeded. And the provision now being made for expansion of Canadian production appears to foreshadow a definite basis of output progressively in excess of the competitive American mills.

The development of the Canadian pulp and paper industry has reached the point where the industry occupies a position of importance in our international commerce second only to that of our vast agricultural industry.

Then there is our rapidly developing tourist business which may be considered to have assumed a dependable basis oi return. It was estimated a year ago that Canada’s tourist trade was bringing to this country “new wealth” to an amount of $143,000,000 per annum. Certain it is then that with the stimulated tourist traffic of the past season any previous figures must have been exceeded.

. The formation of tourist organizations in all our provinces has placed the tourist business upon a basis not unlike that of such continental countries as Switzerland, France and Italy.

Of developments which tend to take Canada’s “hidden resources” out of their biding places, there is none more nationally significant than the progress of hydro ower—unless it be the advances which ave been made in Canadian mining, notably in the Provinces of Ontario and British Columbia. In an extended analysis °l Canada’s hydro power developments, the Royal Bank of Canada states: “The fact that the per capita electric power usage in Canada would seem to be more than twice as great as that in the most highly industrialized nation in the world (the U.S.) shows the rapid strides that Canada has already made toward large per capita industrial production.”

As for Canadian mining: Northern Ontario gold mines again broke all records for output of gold, turning out an aggregate of $22,411,173, for the first nine months of 1925, representing an increase of 23.3 per cent, above the record for the corresponding period of 1924. Coupled with Ontario’s record production is the vastly important discoveries of the Rouyn (Quebec) field, with their Midaslike promises. Canada thus achieves a place on the roster of the world’s great gold producers.

RUT it must not be overlooked that, ■*-* while accumulating some very inter^®Ung assets for the young New Year, Old Man 1925 likewise left some very definite liabilities. And these will require to be liquidated.

There is the unsettling influence of a government assuming federal administration, following an indecisive election. Under existing politics it is impossible to conceive of other than a checkmate performance at Ottawa. In the impasse there is scant hope of the urgently to be desired revision of national taxation.

Canadian business must have tax relief before full progress can be registered. We are fully confronted in Canada with a wholly unequal situation, wherein the people of one nation, nearly eight years after the Great War are still bearing the extreme brunt of an accumulated tax burden and living side by side with the people of another nation, where, by rigid governmental economy, a rapid pruning of all national taxes has been made possible.

In other words, the United States, adopting the principles of sound business put themselves upon a carefully worked out and efficiently administered Budget system and are to-day fast emerging from “the woods.” Canada, on the other hand, with no definite measures of federal saving continues its policy of maximum taxes to the detriment of business initiative.

But a parliament with the present Ottawa make-up cannot be looked to for the relief which Canadian business men so urgently require. Sir Vincent Meredith, Bart., has visualized for us the results of lessened national taxation. “If our expenditures should be so controlled,” he reminds, “that within a reasonable time, Canadian taxes should not exceed those imposed in the United States, it would provide an important stimulus to industry and also an effective aid to immigration

and colonization, the need for which is apparent.”

A Trinity of Problems

TMMIGRATION and colonization! A Where have we heard these words before? Echo answers, where not? Has any national orator arisen of recent years to speak about Canada’s place in the sun, and then sat down again without propounding the magnificent future awaiting our Dominion—when it becomes more fully settled, and our burdens of railway duplication and super-imposed taxes dwindle by reason of a greater population division?

Yes, we Canadians will still be wrestling in 1926 with the problems incidental to further immigration!

Taxation, immigration and a government-owned railway—this is the baggage Old Man 1925 left over for Young Man 1926.

But, somehow for the time being, overlooking'—although possibly not entirely ignoring—this trinity of national worries, the average Canadian business man finds it possible to look upon the future as through rosy glasses. It is fashionable, at the moment, to join Sir Henry Thornton’s company of more or less distinguished persons who are saying that Canada is on the threshold of prosperity—and, happily, it is not difficult to summon fundamental evidence in support of this confidence.

The psychological effect, internationally, should be a wholesome one. “Now,” as a Hamilton editor succinctly remarks, “somebody will confer a favor by giving Canada a push.” 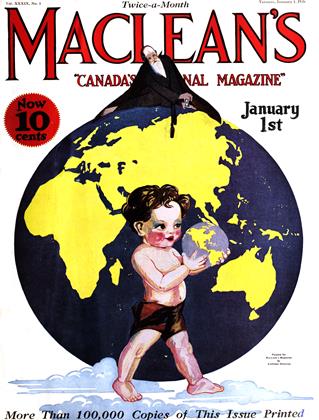