THIS is to be a Tale of Four Cities —a tale which embraces a nation’s economics.

And what is the plot? In the words of the Toronto Daily Star it is: “The direct clash of interests, in so far as there is any, is between Montreal, as a railway and navigation centre which gets all the grain traffic she can handle and is therefore content, and the winter ports of the Maritime provinces which get none of this traffic and are deeply discontented.” It was the release of data which disclosed the extent to which New York benefits from shipment of Canadian grain overseas which precipitated the current issue. It was found that during the month of November 18,000,000 of the 24,000,000 bushels of Canadian grain which left the country for the United Kingdom went via United States ports.

In other words, while the American ports benefited by the routing of Canadian cereals through U.S. channels, the new million-dollar elevator at Halifax, N.S., stood empty.

And further from the Halifax Herald: “Since the opening of the grain year, 92,000 cars of grain were loaded at Canadian National points in the prairie provinces. But not one single car came to Halifax. The other day a Canadian National director stated to the press that the grain booked for St. John, up to December 4, amounted to 1,126,000 bushels against 503,000 bushels for the same time last year. And up to December 4, not one car of grain was billed for Halifax. And we have two elevators. Out of the 124,543,000 bushels booked, St. John got one million and a quarter bushels. And Halifax did not get one bushel, not a kernel. Where did the other one hundred and twenty-three million bushels go? Some of it went to Vancouver. A large part of it went to Portland.”

Figures compiled by the Toronto Daily Star, showing the volume of grain shipped from Canadian and U.S. ports for the past four years follow:

I 'HE issue of the use or the shameful A neglect of Canadian Maritime ports,” according to the Toronto Globe, “becomes more pointed from the interview given in St. John, N.B., by Sir Henry Thornton. The president of the Canadian National assured his questioner of the desire of the government lines to use Canadian ports, but said the matter was, after all, regulated by the shippers of the grain, as they choose the route.” The Toronto Daily Star insists that what Halifax and St. John have to say on this question must be listened to by the rest of Canada.

The Manitoba Free Press demands that the Government make use of the $170,000,000 investment which the people of Canada have in the National Transcontinental line, which is “lying pretty nearly idle.” This line was built, the Winnipeg editor reminds, “so that in the winter months at any rate, grain could be hauled over it to the Maritime ports at a figure which would be pretty nearly competitive with summer lake and rail rates and thus avoid using U.S. routes.”

“And yet,” to quote the Free Press further, “except for a brief period in 1916 when the line was taken over from the contractors practically not a single bushel of grain has been hauled over it.” “The spectacle of vast streams of Canadian traffic going over U.S. territory and through U.S. ports—while our own territory and ports are starving for business—is a spectacle that has aroused a wave of popular protest from ocean to ocean,” in the words of the Halifax Evening Mail. The Toronto Globe sums it all up in one word—“grotesque.” “The Dominion of Canada,” proceeds the Evening Mail, “is built upon the national'policy of East and West traffic and trade. To reverse that policy and abandon that principle would lead to the disintegration of Confederation, just as surely as effect follows cause. And that policy is being reversed, the Eastand-West principle is being abandoned.” The London Free Press regards the attitude of the Maritime press as “a timely protest.” The Free Press admits that there may be economic reasons why Canadian trade travels via American ports but emphasizes that “from a national standpoint there are sounder economic reasons why Canada should encourage and develop her East and West traffic. If we are to be a great united Dominion, then these obstacles must be overcome and Canadian trade diverted through Canadian channels.”

THE Charlottetown Guardian reminds that Maritime ocean ports are nearer to the Mother Country than are the most Eastern ports of the U.S. “Yet between two-thirds and three-quarters

of Canadian wheat shipments are made through foreign ports.”

From Vancouver, which is itself busily engaged in the civic responsibility of building up a considerable traffic in Canadian wheat, comes substantial support of the Maritime claims. The Vancouver Province regards the Maritime case as “a real grievance” and exhorts action by the federal government to extend justice to the ports of Halifax and St. John, that “find themselves passed by,” while Canadian traffic is diverted through U.S. ports.

“If Canada had a Government that was earnestly seeking a solution of this problem,” the Province declares, “the

solution would be found—and it would probably be found in the National Transcontinental.” This road, the Province points out, “is not fulfilling its original purpose.” The Province advocates rates over the Transcontinental that would insure traffic for Maritime rails and Maritime sea ports.

“Use Canadian ports,” is the demand of the Hamilton, Ontario, Spectator, which maintains that “Canadian ports for Canadian products is a good slogan for Dominion-wide adoption.”

It was upon the request of the St. John Telegraph-Journal that Sir Henry Thornton made his statement in respect to the routing of Canadian export grain. “The control of the routing,” he stated, “lies entirely with the grain pools and the owners of the grain.”

“There is every reason why the Canadian National Railways should desire Canadian ports to be used to the fullest extent,” says the President of the C.N.R., “but persuasion is the only pressure we can bring to bear and this is being fully employed. I do not think even the Parliament of Canada can exercise effective control in opposition to this inclination of owners of grain.”

President Thornton’s statement has “astonished the Maritimes,” according to the Halifax Herald. “If Sir Henry were right with regard to his own position or as to the power of Parliament,” argues the St. John Telegraph-Journal, “the vital principle of East-and-West traffic to carry out which Canadians have invested some two billion dollars in railways, would seen to be thrown finally into the discard.” The St. John Times-Star terms Sir Henry’s doctrine, “merely one of despair, contrary to public interest and unworthy of this Confederation.”

SUPPORT for Sir Henry’s contention comes from Winnipeg. It has alreadybeen stated in The Grain Trade News that the discussion of the shipping of grain from Canadian ports is being conducted from the wrong end. D. L. Smith, sales manager of the Central Selling Agency of the Wheat Pools, says: “The desirability of shipping from Canadian ports is recognized as much or more by the pools than any other shipper, since they handle a bigger volume of grain and can do more, perhaps, to make the route they want.”

Proceeding to explain the situation from the viewpoint of the wheat pool shippers, Mr. Smith states: “Grain is always shipped by the cheapest route, and what is desirable gives place to what is economic. The shipper can choose his route, with this consideration.

“The reason why the American route is so largely used is not because the overland rates are lower than Canadian, but because the tonnage mostly comes to American ports. Practically fifty per cent, of the crop is shipped in liner space, the remainder being tramp space. While the pools make all the use they can of Canadian ports, they can only do so when liner space is available or if tramps can be induced to touch Canadian ports.

“St. John is a good winter port, Halifax is a fine port with a new elevator, which will undoubtedly attract tramp tonnage in time. Over 3,000,000 bushels of this year’s pool wheat has gone out through Quebec. On the whole, more than fifty per cent, of pool grain goes by Canadian ports and still more will do so when there is tonnage to take it out. Liner space is sometimes quite cheap when wheat is scarce, but the tramps are free lances of the sea and are generally chartered right from London, so must be attracted by an economic offer. In a strange port without cargo they also cut their rates.”

NATIONAL sympathy with the Maritime plaint established, what is the solution of the ports’ problem?

“There must be great sympathy with the Maritime viewpoint,” concedes the Edmonton Journal, which advances that “the solution is bound up with the granting of federal aid towards the bridging op those national barriers of the Dominion. If this policy were adopted, the Maritime ports would secure a reasonable share of the eastbound grain traffic.”

According to the Toronto Globe, the matter narrow? down to “a reason why.”

“The Western exporters are not so numerous,” reasons the Globe, “but that their course and their argument can be discovered and probably met. Are the rates to Canadian ports too high, and incapable of meeting the competition? Are the port equipments inadequate? Or what is the insuperable obstacle, if any, to the use by Canadians of their own road to their own ports? The issue should be aired and faced in Parliament, and met squarely and justly.”

To which the Toronto Daily Star adds: “When Parliament meets, and after political uncertainties have been adjusted here, surely, is a subject for earnest consultation between the Prime Minister and Sir Henry Thornton.” 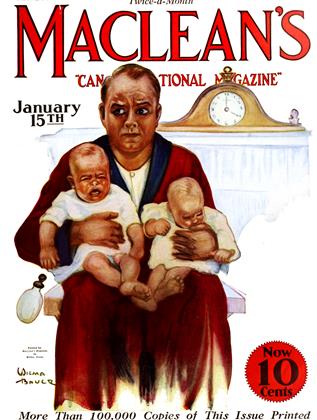