Question—Kindly give me your opinion regarding Asbestos Corporation six per cent, bonds. I am offered one of these in return for some other securities.—Mrs. R.R.D., Quebec.

Answer—The idea underlying the merger of practically all of the asbestos companies in the Province of Quebec is undoubtedly sound. Operating costs will not only be reduced but in addition the new company will be able to increase its prices—in fact has already done so.

The company is understood to be under efficient management, and the outlook is most hopeful. The company’s bonds should be a reasonable business man’s investment.

Question—For some time I have been advised to trade in a Victory bond for a Canadian Paperboard, seven per cent, bond, with bonus of common stock. Would you advise the exchange?—Dealer, Millerton, N. B.

Answer—-Canadian Paperboard Company is the largest manufacturer of cardboard in Canada. The product is manufactured chiefly from waste paper and is used largely in the manufacture of packages, cartons and shipping cases; these during recent years have all experienced a rapid growth in popularity. One of the features of this company is the fact that its supply of raw material is steadily increasing, as over 85 per cent, of the raw material employed consists of waste paper. It operates three plants and in addition controls a subsidiary power company.

The uses to which cardboard may be put are increasing and, therefore, as the company operates under an excellent and efficient management we should say that such a purchase would be a good buy for a long hold.

Canadian Paperboard preferred stock, as an industrial security does not, of course, rank as highly as Canadian Victory bonds, and you should take this into consideration in any contemplated switch of your security holdings.

Question—What information can you give me regarding bonds of the St. Maurice Valley Corporation? What is your opinion of them? — H.H., Saskatoon, Saskatcheivan.

Answer—The bonds of the St. Maurice Valley Corporation are well regarded, and, given a continuance of its present management, the company’s ability to earn it bond interest, should be fully secured. The fact that this company has as its president that outstanding industrialist, Sir Herbert Holt, should be excellent reason for the investing public placing full confidence in the enterprise. For the nine months ended September 30, 1925, the corporation’s net earnings available for interest on bonds were equal to over six times annual interest. Average annual net earnings for the five years and nine months ended September 30, 1925, were $2,178,572 or more than four times annual interest requirements. Bonds will be secured by a direct first mortgage on fixed assets of $14,143,646, against which there is depreciation and depletion reserves of $2,056,659. They will also be secured by direct specific charge on common shares of Belgo Canadian Paper Company, Limited, having a book value of $9,662,217. The company's net current assets as at September 30, last, were $4,649,691. The St. Maurice Valley Corporation is the third largest producer of newsprint in Canada, having

The corporation has consolidated the properties of Belgo Canadian Paper Company, Limited, and St. Maurice Paper Company, Ltd. The former business has been in successful operation for twenty years, the latter for ten years.

Question—Will you please let me know what you think of the bonds of the Canada Biscuit Company?—Rag., Abbotsford, Que.

Answer—The Canada Biscuit Company, Ltd., with plants in five provinces and a distribution system from coast to coast, ranks as the largest manufacturer and distributor of biscuits, confectionery and allied products in Canada. It is a consolidation of long-established and successful enterprises, under the management of Frank A. McCormick.

For the past seven years net earnings of the constituent companies averaged over 3.6 times and in the past three years over 3.7 times interest requirements on bonds.

Large scale manufacturing and distributing of bakery products has been characterized by stability under all conditions. Consolidations such as this, through elimination of duplication, result in reducing costs, expanding sales and increasing net profits.

These bonds appear to be a well secured business man’s commitment.

Question—Would you kindly give me your opinion of Cochrane Hill Gold Mining Company? I have a small amount invested and am considering the purchase of more. The president has great confidence in the mine and has government reports showing the prospects are good. He claims it is no longer an experiment. — Manufacturer, Nova Scotia.

Answer—We do not happen to have any information on file regarding Cochrane Hill Gold Mining Company, but as you appear to be intimate with the president and therefore conversant with the management, you should be in full possession of facts which would warrant you disposing of the question of whether or not this concern is being legitimately worked and promoted under efficient management. Of course you must bear in mind that a mining venture is invariably speculative, and we are seldom disposed to advise mining stock, particularly for small investors.

Question—Kindly advise whether you consider the Huron and Erie Mortgage Corporation a good concern to invest savings in.

Answer—The Huron & Erie Mortgage Corporation is one of our oldest and longest established financial houses. It should be a perfectly safe concern with which to transact business.

Question—As I took stock in the L.R. Steel Company and gave them all I had saved in seven years, ¿700, and was not able to put ten per cent, to it at the time they were wanting it, I have been wondering if I could do anything at all about it now. If the ten per cent, put to it by some shareholders saved it, surely there should be at least something left to us.—Miss A., Paris, Ov>tario.

Answer—The letter which you have received from the L. R. Steel Stockholders’ Protective Trust apparently fully covers the situation. If you did not participate in the Trust we fear that there is no further redress for you and that there is no possibility of your recovering your original investment.

Subscribers to MacLean's Magazine desiring advice in regard to Canadian industrial investments, or life insurance problems, will be answered freely. Inquiries should be addressed to the Financial Editor of MacLean't Magazine and a stamped, addressed envelope enclosed.

If your inquiry concerns insurance, please give full details of your own financial and family position, so that definite and individual suggestions can be given. 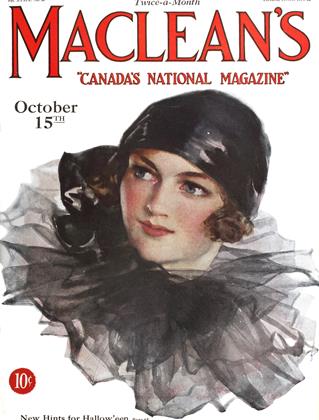