NOVEMBER 11th, and the Railway Board of Canada holding its sessions in a city by the western sea. Overcast skies without, the swish of the early autumnal rains, the day-lighted street lamps vainly trying to pierce the sodden mist. A drizzle across the undraped windows lending further cheerlessness to the bleak, bare council chamber and its crude furniture.

On the bench, Chief Commissioner McKeown, with his colleague, Frank Oliver. Within the rail, a group of counsel, a few newspapermen and officials and witnesses. One of the latter in the box, and, in front of him, the short sturdy figure of “Billy” Lanigan, freight rate wizard of the Canadian Pacific Railway Company. Outside the rail, a few idle spectators, in the main seeking shelter from the rain, and dozing in the hard chairs and the heavy air.

Proceedings as dull and depressing as the weather. On drones the interminable theme — mileage, rates, tonnage — all the involved and technical details insepar-

able from an inquiry of this nature; from all inquiries.

'~p'HE City Hall clock booms out eleven o’clock. The chairman rises, and, as he does so, the cross-examiner, aware of the significance of the action, quickly takes his seat.

"This is Armistice Day,” says the commissioner in subdued tone, “and at eleven o’clock we are asked to observe silence for a few minutes in honor of our dead. The hour has just struck. We will do so now.”

LL rise. Slowly the clock ticks out the pregnant seconds. It, alone, breaks the utter stillness of the room. Occasionally one shuffles his feet. Then utter silence again. Even the thoughtless find themselves brooding over tragic days.

At last the chairman speaks: “We will now resume.”

All take their seats but two men— one is the high official and freight expert of the railway; the other his witness.

But the silence continues.

The expert turns to the table and aimlessly moves his papers. More moments of silence. The witness looks expectantly in the direction of his questioner; so do the two commissioners. But, instead of pursuing his questions, the expert turns his back on court and crowd and looks with unseeing eyes through the window. He is busy with his handkerchief. One commissioner sweeps him •with a comprehending glance, and then, in turn, busies himself with his own papers.

He, too, had a son—before the War.

MpHE official turns once more to his witness, slowly wipes his glasses, and then in level tones:

“What did you say was the cost per ton mile on your system last year?” 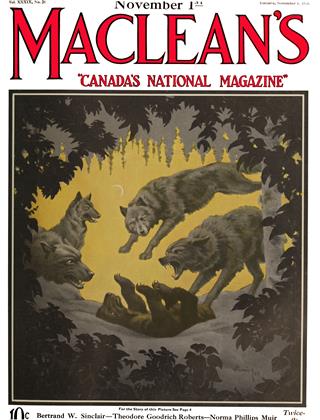