CANADIAN bankers are globetrotting, as it were, again!

It is many a month since we have had as arresting, as significant an announcement as that from the Bank of Montreal to the effect that it has purchased the Mexico City Banking Corporation. This development, which incidentally marks the removal of any American banking competition in Mexico City, is welcomed as one more instance of the success of Canadian institutions in outside countries, when pitted against financial or industrial groups of other countries. The decision of the Bank of Montreal to extend its operations in the capital City of Mexico is accepted also as an indication of confidence that domestic affairs in Mexico now give promise of greater stability and progress than has been the case for some time.

The Bank of Montreal’s action is intriguing in so far as it suggests the possible trend of Canadian banking abroad. It will be recalled, that in the months immediately following the armistice, the tendency of Canadian banking was distinctly toward a broadening of international connections. Canadian bankers, caught up in an impressive moment among United States bankers, went abroad.

In comparison with the aggression of United States bankers, reaching out for world status, there were moments in the buoyant days of the post-war period when the Bank of Montreal’s foreign policy appeared ultra-conservative. It may be summed up in the words of the president, Sir Vincent Meredith, Bart.: “Following the policy of many English banks, we have deemed it prudent to refrain from establishing branches at points far afield where Canadian capital would be required in local and possibly competitive industries, preferring rather to strengthen and extend our relations with foreign banking houses, and to retain their good-will, thereby conserving our resources for the assistance and encouragement of home trade.”

ON THE other hand, in support of the action of those Canadian bankers who reached out, internationally, there was the statement of Edson L. Pease, at that time vice-president and managing director of the Royal Bank of Canada. Mr. Pease made it clear to Royal shareholders that the deposits throughout the West Indies and Central America— where the Royal had many branches— largely exceeded commercial loans at these points. The point which he thus wished to emphasize was that these foreign branches were self-supporting, capable of carrying on without recourse to Canadian capital.

Then came the time when the Bank of Montreal’s directors’ caution was rewarded. The world wide economic upset, which followed international deflation, resulted in vast banking wreckage. Extensive losses occurred for several of the new-formed foreign banking corporations that had set up in New York City and spread their operations to many other countries. At least one Canadian bank suffered in the international debacle of trade and finance, the Union Bank of Canada, which was a partner in the ParkUnion Foreign Banking Corporation, seeking to entrench itself in the banking field of the Orient.

Taylor, that “more money has been lost by foreign banking institutions, operating in certain directions abroad, than ever before in a similar period in any country.” So far as I am aware, no compilation was made public to show the extent to which money was actually lost. But one instance will serve to illustrate: the Guaranty Trust Company of New York set up an extraordinary reserve of $15,250,000., “to cover any losses sustained from banking operations in Central and South America.” Surely this was no mean gesture!

Canadian bankers are to be congratulated for their foresightedness. As a result, they did not become unduly involved in the post-war crises. It is doubtful if a sum in excess of two million dollars of Canadian capital faded out of the picture by reason of the attempt to gain a foothold abroad.

Now, after the lapse of three or four years, comes the Bank of Montreal’s Mexico expansion. Many will accept this as an index of improved world finance, as well as a hint of political stability in Mexico. It is still no deviation from 1918 policy, on the bank’s part, however. The Bank of Montreal has absorbed a going concern, rather than penetrated a new banking field.

TN TAKING over the Mexico City A Banking corporation, the Bank of Montreal will secure a branch office to its main office in the retail district of the city of Mexico, supplementing the service which it has supplied for twenty years through its location in the financial area. In addition to operations in the city of Mexico, the Bank of Montreal has for some time past operated branches in Vera Cruz, Puebla, Guadalajara and Montmorey, and last year opened a new office in Tampico. It thus covers the strategic points in Mexico, and holds the premier position in the banking field of that country. Recognition of the bank itself, as well as of its representatives, is seen in the fact that H. Weldon, superintendent of branches in Mexico, is a member of a permanent banking commission appointed by the president of Mexico, which advises the Government on all matters appertaining to banking law and practice in the Republic. Mr. Weldon has been in charge for the Bank of Montreal in Mexico for fifteen years.

One other Canádian bank is represented in Mexico, the Canadian Bank of Commerce. In addition, there is a branch of a German bank and also a Spanish bank, and a local bank controlled by French capital. The Government itself operates a bank under the name of ‘Banco de Mexico.’ Co.

Although there has been no spectacular Canadian banking development abroad of recent months, until the present move of the Bank of Montreal, the fact remains that Canadian bankers have been consistently pursuing important relations outside of Canada. And the network of branches, in other countries, which supplement our domestic system is considerable.

Where, outside of the Dominion, will you find Canadian bankers?

Well, take for instance, Newfoundland. Here we find the Bank of Nova Scotia, the Canadian Bank of Commerce, the Bank of Montreal and the Royal Bank all represented, with a total of twenty-seven branches in almost as many centres of the colony.

It was the Bank of Montreal which pioneered to London, England, in 1870

and to New York City in 1855. Other Canadian banks to open London branches have been the Royal, Commerce, Nova Scotia, and Dominion. The Union was there until absorbed by the Royal.

THE Bank of Montreal established the first agency of a Canadian chartered bank in the United States, when it established its New York agency. Now, after the lapse of seventy-one years, five Canadian banks are directly represented in New York, the Montreal, the Commerce, the Royal, the Nova Scotia and the Dominion Bank. Three other Canadian banks at one time had New York agencies, the British North America, which lost its separate identity by merging with the Montreal, the Merchants, which collapsed in 1921, and the Union, which merged with the Royal Bank of Canada ir 1925.

Elsewhere in the United States, Canadian banks have their own agencies in Boston, Chicago, Portland, Seattle and San Francisco.

The average Canadian does not know, perhaps, that Canadian brokers are not permitted to function in New York City as fully as they are in their own country, in other words Canadian banking operations in New York are restricted. Under the New York State banking law, foreign banks may buy, sell or collect bills of exchange, issue letters of credit, receive money for transmission or transmit the same by draft, cheque, cable, or otherwise or make sterling or other loans, or transact any part of such business.

But the New York agencies of Canadian banks, in common with other foreign banks, may not accept deposits from the public. Nor may they grant discounts.

Very many attempts have been made to bring about ‘reciprocity in banking’ but none have been fulfilled as yet. As a matter of fact it is a question whether Canadian banks would stand to benefit, and certainly there are arguments to bring to bear against any arrangement which would extend full banking privileges in this country to United States banks.

In Central and South America

The Royal Bank, which even before the war had begun to make marked progress in the West Indian belt, furthered its connections very perceptibly from 1917 on in Central and South America. To-day the Royal has twenty-three of its own branches in South America alone. The Commerce has two; both in Brazil. In view of its South American establishment it was not wholly surprising to find the Royal venturing forth to Barcelona, Spain, in the early part of 1918.

Just after the war the Royal made an interesting departure. It opened a branch at Vladivostok, Russia. It was a concomitant move to Sir George Foster’s attempt, when Minister of Trade and Commerce, to encourage commerce between Canada and Siberia. But it was short-lived because of Russia’s political collapse.

The Montreal, the Royal and one French-Canadian institution, La Banque Nationale have their own Paris branches. These are of recent establishment and belong to the post-war period. At the time of the Bank of Montreal’s entry to France, Sir Vincent Meredith, Bart., explained that it was not being established, ‘for the purpose of loaring Canadian funds but to supply necessary banking facilities for Canadians travelling abroad and to further the interests of Canada generally in France.” ✓

Sir Vincent may be said to have summed up the only sound reason for Canadian bankers at any time seeking the foreign field. Canada has too vital need of capital for her own development to warrant the loaning of Canadian bank funds in any extended international banking operations. But for the cementing of good relations abroad, for the pro-

motion of Canadian business with other countries, our bankers may do much, and for this reason their gradual spreading out into other lands will have a marked effect upon our economic up-building. As a matter of fact Canadian bankers can perform much the same function in other countries, if upon a lesser scale, as is now to be expected of the forthcoming Canadian Minister at Washington—who must become, actually, an ambassador of business good-will, even more than a diplomat of government and politics. 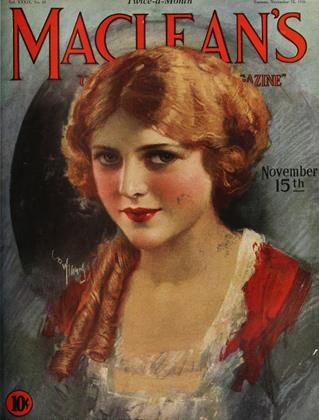