EXCESS GOLD HOLDINGS MAY BE EMBARRASSMENT —WHAT IS THE SOLUTION? J. HERBERT HOD. GINS December 1 1926

A TREASURE Port of Montreal ship hove just before into the the freeze-up of navigation. It was not the picturesque, galleon type which may possibly come to your mind at first thought. Rather it was a very modern treasure ship, the C.P.R., S. S. Metagama, bearing gold specie in English sovereigns to an amount of almost $1,000,000. By a peculiar coincidence this gold shipment reached Montreal one year to a day after the arrival of a similar type of cargo aboard the C.P.R., S. S. Montcalm. But, whereas the Metagama brought $1,000,000 this year, the Montcalm last year brought $3,000,000 in bright golden sovereigns. It took forty boxes to bring the gold coin to Canada this year; 116 last year.

No information was given to the press relative to the ultimate destination of these English sovereigns. But, disregarding for the moment their ultimate purpose, sufficient romance attaches to any gold shipment of such a considerable sum, to warrant more than the passing interest of the ship reporters; one’s imagination is easily stirred by the incoming of forty boxes of gold sovereigns into a country. Such cargo is invariably hedged about with considerable red tape. For instance, each box, which is as much as one man can carry, was carefully checked when placed on board ship, and upon being taken ashore at Montreal to the waiting vans of the Canadian Pacific Express Company to which it was consigned, great care was employed to make certain that none of the seals had been tampered with. The Captain of the S. S. Metagama as a matter of fact did not leave his ship until this precious cargo was safely installed in the transportation vans provided for its convoy through the streets of Montreal. No word of this gold movement was allowed out to the press until the consignment was safely stored by the Express Company.

Overlooking other financial considerations, for the moment, let us regard this $1,000,000 in English gold sovereigns definitely ear-marked for Canada. Another million dollars in gold! What are we going to do with it?

This gold specie is announced as we have reached the point where our economists are beginning to wonder if Canada is to become surfeited—at any rate embarrassed—by her gold holdings. The average layman might think it impossible to become embarrassed by an overabundance of gold! But economists will tell you otherwise. It is axiomatic that those who hold gold lose interest and for Canada to hold excess gold would be an economic inadvertence in view of our national debt. Within conservative limits it might even be found an advantage to ship our gold to the United States for employment in our national obligations. How do we reckon that Canada is

holding gold in excess? For one thing, according to the monthly statement of the minister of finance, Canada’s gold holdings on June 30 amounted to $98,204,095. This is $30,000,000 above what is normally considered Canada’s gold reserve. In other words we are holding fifty per cent, more gold specie at this time than international bankers expect Canada to be holding; which is one sound reason for our healthy exchange position abroad.

CANADA’S place in gold production is slowly dawning on Europe,” according to a recent comment of the Toronto Globe. Just as it seemed to require the Great War to establish Canada’s nationality in the eyes of the outside world, according to the Globe, it has been left to the League of Nations properly, though briefly, to proclaim Canada’s place in gold mining.

One year ago the statement was made in one of the League’s publications that the leading gold-producing countries countries were: Transvaal, United States, Australasia; and after that, “other countries.” The 1926 list just issued from Geneva corrects this injustice; the countries in order of production are now given as:—Transvaal, United States, Canada, Australasia and “other countries.” An explanatory note on the table says: “The world’s output of gold in 1925 was the same as in 1924. The production in Canada has more than doubled since 1913 and has gone a long way towards counter-balancing the steady decline in the output of the United States of America and Australasia.

THE predominant position of the Transvaal in world production is the outstanding element in the situation. One-half of the world’s new supplies are coming from this field; hence it is important that production there is likely to decline at an early date and that no new field is in sight to take its place— unless we are to accept Canada as the potential new field. The gold-bearing formation in the Transvaal is quite regular which makes it possible to calculate the life of the mines with a considerable degree of accuracy. Moreover, this regularity has afforded the basis for exploitation on an extensive scale, to accomplish speed and economy of extraction. The result is rapid eUi inti

•From the reports of the Bureau of the Mint of the United States. Official figures for 1926 not available, but world total is estimated at approximately $400,000,000. No decline in world production

Joseph Kitchen, chairman of the board of the Union Corporation, London, one of the outstanding mining corporations operating in the Transvaal, in a late statement, expresses the opinion that production is now at the top and that from now on the new mines opened will not offset the declining output of the old mines. He expresses the further opinion that the decline in that field will not be equalled by increases elsewhere. According to his estimate the average annual production in the world in the five years ending 1934 will be $365,000,000—and that at the end of that time Transvaal production will be down thirty per cent. In his calculations he allows for Russia’s recovery to pre-war rate, and for a speeding up of Canadian production to $60,000,000 per year.

MR. KITCHEN’S estimates upon world production for the most part are in line with other estimates by mining experts, although as regards the Transvaal estimate, Mr. Kitchen is not as favorable to the mines as is Sir Robert Kotze, official mining engineer of the South African Government. Sir Robert looks for a decline in ten years of fortyeight per cent., but this is without allowance of the extensions of the known fields. “Unforeseen discoveries,” he says, “may of course, put an entirely new complexion upon the position but it is unsafe to rely upon such eventualities.” Clearly the chief differences are over the possibilities in Canada, a fact which has been recognized and emphasized by the National City Bank of New York. The production in all Canada in 1925 approximated $35,000,000 and recognized authorities look for an output of $50,000,-

000 to $60,000,000 per year within five years. Indeed, the opinion that production will ultimately go much beyond these figures is commonly expressed, but developments have not gone far enough to afford a definite basis for the prediction.

In the meantime Canada’s gold pile is rapidly accumulating.

The Trend of Our Holdings

JUST how we are to solve this problem of excess gold is compelling the attention of our economists and our bankers. At least it is now fully realized that the action of six months ago by which Finance Minister Robb put Canada once more on a gold basis has been justified. It was an outward and visible sign of stabilization, and it definitely and immediately showed our position to the world. In the meantime continued heavy borrowings abroad—primarily, of course, in the United States, because Great Britain has not resumed her lending on any important scale—-and our heavy gold holding has worked toward unusual strength of the Canadian dollar abroad. Go where you will in the United States at the present time, you can pretty well depend upon your Canadian dollar being cashed at par. Between banks there may even be a slight premium. But it is definite evidence of currency strength that you find a Canadian dollar bill passing at par in ordinary routine trade. For most Canadians this is the outward and visible sign—actually the only medium by which Main Streeters become cognizant of the gold situation in their country.

As gold production continues to bound forward and as our gold pile continues to mount some new decision in our national economics will be compelled. In the meantime when there is no clear reason why we should import $1,000,000 worth of English gold sovereigns, a treasure ship bearing this coin arrives at a Canadian port. One is reminded of the old saying, “To him that hath, shall be given.” 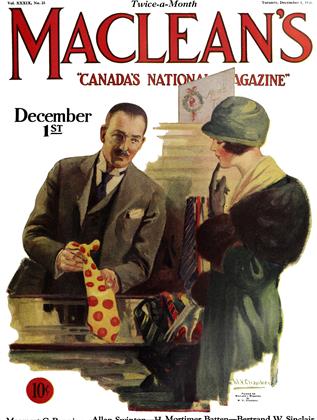