ONE of the prophetic cartoons which ushered in the New Year, showed 1926 still in his swaddling clothes busily splitting the income tax in two.

The scene was not set in Canada, however. It was an American cartoonist applying prophecy to United States conditions—based upon the promise of President Coolidge of a further slash in the income tax of the United States. The United States Government is about to make its third reduction in income taxes in five years. “The proposed cut,” in the words of the Winnipeg Tribune, “will further increase the great discrepancy that now exists between the income taxes of the United States and Canada.” The Montreal Gazette regards the situation ominously. “When the United States cuts its income taxation to near vanishing point, while that of Canada remains high among the nations of the world, ’tis high time,” warns the Gazette, “to set seriously about reducing irritating taxation which impedes trade and retards growth.”

Sir John Aird, ex-president of the Canadian Bankers’ Association sounds similar warning. “Undoubtedly the action of the United States,” he says, “in making successive reductions in its income tax makes the situation even more difficult for Canada. It will be even less easy than in the past to hold such immigrants as Canada does get, and to keep her nativeborn sons at home in the face of much lighter taxation across the border than Canadians are called upon to pay.

“We recognize the difficulties by which our Government is faced,” concedes Sir John, adding, “chief among which is the need of revenue, and there is room for the highest statesmanship to be applied to the problem.”

The comparison of the situation here as in the United States speaks for itself:

The Problem of Reduction

THE question is, can we—is it physically possible—effect in this country a definite policy of tax reduction?

The speech which his advisers put into the hands of His Excellency the GovernorGeneral, at the opening of Parliament, last month, among other things promises “substantial reductions in taxation.” “I congratulate you,” His Excellency said, “on the growing prosperity of this favored land. . . . This increased prosperity and advancement have been aided by the policies of the Government and the reductions in expenditures and taxation made from time to time. In the opinion of my ministers the improved conditions warrant further substantial reductions in taxation. Every effort will be made further to reduce expenditures.” Thus, we have the announced policy of the administration, some two days after an Ottawa despatch appeared in the Toronto Globe declaring that “war has been declared by Hon. George Boivin, minister of customs and excise, on a reported lobby being engineered in Toronto and Montreal for the abolition of the income tax on the main argument that it

costs the federal government 62 y2 per cent, to collect the tax.” Further, according to the Globe, the minister denied that during the past five years the cost of collecting the income tax had exceeded 2 2-3 per cent.

The Hamilton Herald regards the Ottawa pronouncement as a political gesture. “It is clear that the speech from the throne was drafted with a single and anxious eye to the Progressive group,” insists the Herald. The Montreal Gazette agrees. It describes the speech as “an obvious Macedonian cry to the Progressives to ‘Come Over and Help Us.’ ” The Toronto Star, however, urges that “there is nothing in the programme that is not in keeping with long-declared Liberal Policy.”

TO WHAT extent is tax reduction possible at this time? “One thing is certain,” reminds the Toronto Globe, “the Government needs the money.”

“No one expects a slashing cut,” retorts the Winnipeg Tribune, “but after all these post-war years a good beginning, at least, should be made without delay. Not only would it reduce the unflattering discrepancy that now exists between the Canadian and the United States rates, it would also have the valuable psychological effect of heartening and encouraging the Canadian taxpayer, and cause the foreign investor to look more favorably upon us.”

The Montreal Standard, which characterizes the federal income tax as “the greatest curse of all our taxes,” admits, however, that “we cannot get rid of it, perhaps, because it helps to pay for the war.” The Standard maintains, nevertheless, that “we can ease it.” Which seems to be what the public also wants.

“ We can bring it more in line with the United States,” argues the Standard, advancing, as a means toward this end, that economies be started at Ottawa. “In the federal arena,” proceeds the Standard, “this taxing orgy has led to a civil service at least fifty per cent, overmanned with spongers and shirkers who should be turned adrift to make a living in occupations more useful andmore industrious.” As a second suggestion, the Standard points out that “the federal income tax is swallowed, every dollar of it and more, by the deficits of the Canadian National Railways which the public ownership fetichists insist on gorging, no matter if the tax-payer’s back breaks under the strain of keeping the monster in clover.” In short, as the Standard soundly admonishes, “the course of wisdom is to save, to retrench, to get along without the things we cannot afford.”

The Montreal Gazette expresses scant hope of Ottawa’s promised economies. “Some economy is expected to follow consolidation of departments, but,” warns the Gazette, “no one should found great hopes upon this proceeding. Mr. King’s proposal is not of choice but of necessity. He will lessen the number of portfolios because their former occupants were defeated last October and he has not the courage to appoint successors and so face the by-elections their appointment would involve. Of the two evils he chooses the least; but the saving to be effected will be little more than two or three ministers’ salaries.”

The Sherbrooke, Que., Record, is likewise sceptical because of its belief that, “with another election looming in the distance any great tendency to deny expenditure in this or that direction is not

likely to be greatly in evidence.” Similarly, in doubtful mood, the Vancouver Province opines that “as necessity drove the Dominion into the income tax, wild horses would not drag it out again.”

DIVORCING the situation from politics, the Financial Post brings a strictly business spotlight to bear upon the subject of taxation, emphasizing the vital need of a programme of national debt adjustment. “The Financial Post is right,” declares the Kingston Whig, reminding us, with the Financial Post, that it is seven years since the Armistice and that not a single step has been taken in this country to deal in a permanent and satisfactory manner with the debt connected with the Great War. “It is high time,” in the Kingston editor’s view, “that some well-thought-out scheme was prepared, and the suggestions of the Financial Post that leading financial and business men be called in to prepare one will be approved by the public.”

The Government of the Province of Ontario entered into consultation with financial experts and evolved a plan to retire its debt in forty years. The provincial treasurer called in representatives of the Canadian Bankers’ Association and the Canadian Bond Dealers’ Association. The result was a decision to issue serial bonds-—and the public debt can be liquidated over a named period. By this policy there is a definite sum obligated annually. Ontario’s plan is described by financial

experts as a sound one—and recommended to the provincial and federal governments.

In the light of what Ontario has done, in adopting the serial bond system, the Financial Post urges that the Dominion and other governments of Canada follow the economic example. It, moreover, suggests that Canada’s leading business men and financiers be called into consultation and names, among these, Sir Frederick Williams-Taylor, Sir Joseph Flavelle, Sir Lomer Gouin, Sir Herbert Holt, Messrs. Thomas Bradshaw, E. R. Woods and A. E. Ames. These gentleman, it maintains, “would undoubtedly be able to give to the country the best available counsel in facing a financial problem of grave importance.”

In short, let us definitely inject business into Government. 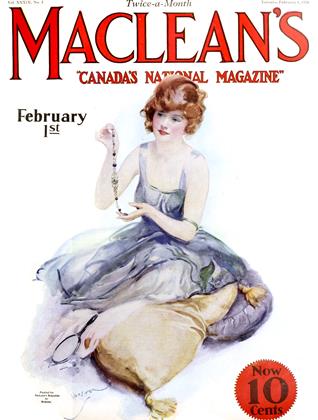