WITH few exceptions, the press across Canada regards the political impasse at Ottawa as the ringing of an alarm clock warning the business man of a possible check to the return of the brisker business which had appeared in prospect for 1926. The Toronto Globe's description cf the dramatic play of federal politics as an “orgy of bargain and barter” was accompanied by such outcries as the Hamilton Herald's, “It is a burlesque of representative government,” and the Quebec Chronicle's “putrid rottenness.” All of which, however, the Toronto Daily Star labels “a billboard for exasperated Tory opinion.” There is, however, national acceptance of the opinion that the political situation will tend to halt, if not cripple, business progress at this time.

“The present deadlock is an interesting academic study for the student of constitutional procedure; it is a rare treat fer the cartoonist and paragrapher,” concedes the Financial Post with undisguised sarcasm, while it proceeds to drive home the vital truth, “But it is a maddening and grim reality to business men and the country generally.”

“The prayer to-day,” according to the Montreal Daily Star, “is: God help the country.” The Star prophesies that no busihess progress can be made. “The King government for the time it can hold on,” the Star explains “will be a government of mannequins w ith Forke managing the show.”

The Ottawa Journal describes the Mackenzie King government as being “out on suspended sentence,” and the Border Cities Star stresses that “we must have an election to pull the country out of the ridiculous political situation that now exists.”

‘National need cannot be sacrificed to private economy, and goodness knows Canada needs strong government now more than ever in her history,” urges the Star.

The St. Catharines, Ont., Standard sees only business chaos as the immediate result, while the Fredericton, N.B., Gleaner expresses the opinion that “the situation will never be cleared until there is another election and one party or the other returned with a decided majority.” In the meantime, in the Gleaner's view, “there will be a period of political uncertainty during which the business of the country must suffer.”

THE Kingston Whig and the Toronto Daily Star, both strongly Liberal, profess no worry over the turn of events in Dominion politics. The Whig describes the situation since the vote was taken on the Meighen want of confidence amendment “like a calm after the storm,” The Star insists that “the country is in no peril of being ruined because of a close and tight-fitting party situation at Ottawa.” According to the Toronto Star, “the very life of the country” does not depend on the solution of the Ottawa crisis. “At Ottawa,” the Star proceeds to argue, “one may find the seat of the country’s politics, but not of the country’s life. The country has its life wherever throughout the Dominion it has a single inhabitant earning his living by the sweat of his brow. The prosperity of the country comes from the diligence and industry of its people. It comes, not from the activities of two or three hundred party politicians playing their game of in-and-out, but from the aggregate work and thrift of the nine or

ten million people who make up our population.”

The Fredericton Gleaner points out that the political upset came just when business the world over was showing distinct signs of improving. “If Canada is to share in the economic revival,” the Fredericton editor warns, “she needs a strong, virile Government, with a clear mandate from the public.”

What do we find as the result of the present play of politics?

The Vancouver Daily Province describes the situation as a “government in custody,” a government “hobbled, shackled and with one leg lopped off,” because of dependence upon “its Progressive crutch.”

“This may be very well from the Progressive point of view,” the Province observes, “but it is rather hard on the country, which emphatically needs at this moment a government possessed of all its limbs and all its faculties and able to lead the country' out of the slough of pessimism in which it has been floundering, and on to the heights of prosperity. The thing Canada requires is a government which can run and keep its balance, not one which must falter and creep.

It is therefore doubtful if the Progressives will he conferring any boon on the Dominion by bolstering up the Liberal party.

If they could place Mr. King or some other leader on his feet and give him an opportunity to do something, it would be different. But that is not on the programme.”

On the other hand, the Manitoba Free Press, which has no particular liking for the two-party system, considers that “the groups at Ottawa have dragged the ills of the various sections of Canada out into the open where they can be looked at and handled as realities.”

“This,” continues the Winnipeg editor, “is something worth while and is almost certain to lead sooner or later, by one means or another, to the production of successful remedies.”

The Brantford Expositor deplores that, “judging from the speeches made in the House, the welfare of the country, in the eyes of many politicians is a subordinate affair and the interests of political parties ' are paramount.”

THE Winnipeg Tribune strikes an unÍ expected note when it singles out the j Governor-General as one to be blamed for I the present turmoil at Ottawa. “It is clear to-day.” declares the Tribune, “that if His Excellency the Governor-General had accepted the resignation of the Government after its decisive rejection by the people, a Conservative administration would have had no difficulty in holding the reins of office ... it is an impossible situation for which the Governor-General of Canada must accept no small part of the responsibility."

What is to be done then, in the interests cf Canadian business?

“Apparently there can be no real solution reached v ithout another dissolution," in the view of the Winnipeg Tribune, or as the St. Thomas Times-Journal expresses it, “Far better to throw the country into the throes of another election than to peí mit the present chaotic conditions to continue.”

“Let us start all over again,” urges the Financial Post. “We have had one election and failed to get what we wanted. : There is now one thing left to dotry again note." I

The Toronto Globe agrees. “Canada has had more than enough,” insists the Globe, traditionally a Liberal paper. “Better put up with another general election, get back to the two-party system and secure stable government once more. It may not be all it should be. But it is better than this.”

The Globe's idea is basic to the London Free Press editorial. TheFree Press points out that now, as much as ever in its history, Canada needs a strong, stable Government, which would put Canada first in its policies, which would introduce stabilizing legislation and would initiate a programme cf economy and tax reduction such as the United States has been given by the Coolidge administration. The Dominion would have in the next decade the greatest period of development in its history. Thus it concludes: “Before Canada progresses as it should, the Ottawa situation must be cleared up. It cannot be cleared up as long as we have in power a Government as weak as the present ministry, hanging on to power by an eyelash and dependent for office upon logrolling.”

The Montreal Financial Times and the

Port Arthur, Ont., News-Chronicle both want another election. “While the country grew weary of the turmcil of the recent election, it is generally realized that the country would be far worse off under present conditions than it would be by an early clearing of the atmosphere as possible,” as the News-Chronicle sees it, and from the viewpoint of the business man, the Financial Times calls for another federal vote, “in order that if possible, there may be established some party that will have power to carry on without compromise, and in a manner calculated to render effective aid insofar as government action can, in the direction of trade revival, stimulation of immigration and the development of natural resources. Only thus can the country reap the advantages during the current year of the essentially sound position it had reached at the close of 1925 in the major portion of national activities.”

Undeniably, from the angle of general business, the situation at the Capital is intolerable—and a situation incompatible with the business man’s daily peace of mind is a situation fraught with new cause for worry at every breakfast table. 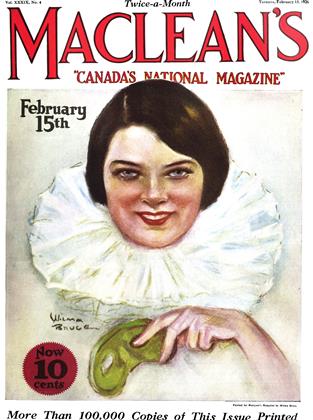