ON A recent day in Montreal general interest centered round the stately head office building which the Sun Life Assurance Company of Canada has recently added to the imposing group which surrounds Dominion Square. Hon. Narcisse Perodeau, the Governor of the Province, opened it with a golden key; Sir Lomer Gouin, an honored ex-premier, added words of admiration for the edifice and of generous praise for the company which built it. Citizens in thousands thronged its great corridors, unanimous in praising the excellent appointments to facilitate business, and in admiring the beauty which makes of the structure a symphony in stone.

At the annual meeting a few hours before, President T. B. Macaulay had delighted the shareholders by reporting over a billion dollars of assurances in force—the first occasion when such a record had been made by a Canadian Company; while assets, dividends, and other activities were on a correspondingly prosperous basis.

Later in the evening five hundred men, guests of the Company, feasted in true Anglo-Saxon style in honor of the occasion. The head table, was adorned by citizens eminent in every walk of life. President Macaulay had on his right the Governor of the Province, and on his left Sir George Foster, one of the few remaining Elder Statesmen of the Dominion. Mr. Beatty brought the greetings of the Canadian Pacific Railway system, a product like the Sun Life Company of Confederation’s early years; Sir Frederick Williams-Taylor spoke for a'nother great and contemporary Canadian pioneer institution—the Bank of Montreal. Sir George Foster, the Old Man Eloquent of Canada, who was an undergraduate of eighteen in the year that Canada and the Sun Life Company were born, spanned the long years from 1866 to 1926 out of his personal knowledge and recollection. The cable brought felicitations from Rt. Hon. L. C. Amery, Principal Secretary of State for the Dominions and for the Colonies, and other Imperial statesmen; the Premier of Canada, the Leader of the Opposition, the Speaker of the House of Commons, and men high in national and commercial councils sent greetings. Great sister insurance organizations were represented. And from almost every corner of a globe into which this Canadian Company has carriedthe gospel of lifeinsurance —Great Britain, India, South Africa, Latin America, Japan, there poured in

congratulatory messages to the Company, and tributes of loyalty and affection for its chief.

SOME spoke of the valuable part the company had played in assisting the nation in war; others of its aid in financially supporting great Canadian enterprises. Sir George contrasted present conditions with early Confederation years, when both Dominion and Company were conceived, and out of which each had grown to world-wide authority and renown. All dwelt on the Company’s material success. But the most significant, and general note was praise of the large humanitarian work of the Company. This was phrased by Sir George Eulas Foster in characteristically felicitous terms: “I will pardon my friend here,” he said turning to President Macaulay, “if his breast swells high when he thinks of the mighty organization of which he is the head. When he listens to messages from Japan, from India, from other parts of the world, to congratulations and to statements with regard to the greatness and the goodness of his organization, I pardon him his pride.

“But I put it to him that the highest pride comes from the thought that in all this great commercialized institution there is the altruistic spirit. That is a joy of priceless worth; to cultivate habits of thrift, or help, and aid; to be a distinguished minister of suffering and decadent humanity. All that is within his power. All that is gracious service for our country and for the other countries in which his organization administers. It is a contribution to human worth, human uplift, human character, and human happiness.”

The words of Sir George followed the reading of messages in which, in addition to paying tribute to President T. B. Macaulay, honour was duly paid to the memory of his father, Robertson Macaulay, who largely shaped the career of the Company and fashioned its destiny.

There were old men present who shared with President Macaulay himself, (who has completed his forty-eighth year in the service of the Company,) the traditions which Robertson Macaulay transmitted to his son, when in 1916 he finished his

BUT for the benefit of those who think that in all business there is nothing but the practical and the sordid, no room for sentiment, or dreams, the romance of a Scotch boy is worth telling.

The father of Robertson Macaulay was the captain of a vessel on the Scottish coast. He was a daiing navigator, and the story still lives in the little seaport town of how in the great storm of 1833, when many ships were lost, Captain Macaulay scudding up before the gale from Inverallochy, missed the harbour entrance and was driven out to Kinnaird Head. How he fought his way back in the teeth of a north east gale and a blinding snowstorm, with his sails in ribbons and most of Ids spars down till he brought his battered hulk at last into port, is one of the proud records of the town.

But one day the ship did not return. Following the cruel blow which removed husband and father, there came the dire need which resulted from the loss of the breadwinner of the home. Of that bitter experience young Robertson Macaulay drank to the full. At fifteen he sought a living as a clerk in a wholesale house. But his nights were given to unremitting study, specializing in mathematics. In a few years he emigrated and in 1874, three years after the Sun Life Assurance Company of Canada commenced business, he joined it, and soon became its impelling force. The bitter memories of his youth had left on him an indelible impression. His life thenceforth was dedicated to the service of those who had suffered like himself. To him life insurance was more than a business—it was a mission. He made ruthless war on the small print clauses which marred the value of early insurance policies. He extended the Company’s operations into other lands and he built the first unit of the stately pile which now houses the activities of eleven hundred employees at Head Office.

And with true Scotch foresight, he made sure that his policies should persist. So he drilled and schooled his son Thomas Bassett Macaulay, in the fundamentals and rudiments of the profession. At a time when most young men of his age

the strength of the Company, and expanding its operations. The actuarial, investment and administrative resources of the life insurance realm were laid under tribute for lieutenants who could assist in carrying out the larger aim of the Company.

THE high purpose and ideals so early and so carefully inculcated have become a creed with the Company’s representatives throughout the world. This had dramatic expression late on the evening of the banquet, when John Tory, of Toronto, one of the senior field managers of the institution, drew back a large Union Jack and disclosed an oil painting of President T. B. Macaulay. The donor, speaking for the Field Force, recalled that twenty years before, an oil painting of the President’s father, by the same artist, Mr. J. W. L. Forster, had been presented to the then President by the field force of that day. Past purposes and present accomplishments were happily associated in the presentation in question.

The events of the evening also indicated that in the larger and higher conception of their common task, the life assurance companies of Canada have become a brotherhood. “Gone are the days of the old rivalries and the old frictions,” said Mr. Macaulay. “We realize the need for unity in the great service which we must unitedly render to the people of Canada, and of the world. We have outgrown our differences.”

That is but one outcome of the spirit and purpose born in a Scotch boy’s heart on a dark day in his own youth, and admirably expressed by his son, when as the mature and successful head of one of the greatest life assurance companies in the world, on an evening dedicated to a notable material achievement in its own history, he adverted to the true mission and exaltation of the work in which he is engaged in the following words:

“Every expansion of life assurance means a lessening of human misery, the uplifting of humanity, the saving of homes that would otherwise be crushed to the ground. I rejoice that I personally am engaged in such noble work, the business of service to humanity, and all I can say is that I rejoice that the Sun Life Assurance Company of Canada has been able to do its share, its whole share, in the past. I want to assure you that we will do our best to fulfill our share of service to humanity along lines that are ours in the future.” —Advertisement

long career as its President, after forty-one years of service. They shared the emotion of his son, as he paid his tribute of filial regard to his father’s name. Even those unfamiliar with the history of the Sun Life Company were made aware of a great spirit and purpose in the institution which they honored above and beyond the commercial factor, and the persistence of a fine tradition throughout the years spanned by the regime of its two last presidents.

were much busier with cricket bat, or fishing rod, the son had imbibed both the technique of the profession, and the high ideals and far seeing policies of his father. At twenty he was a trusted officer, a few years later its actuary, and long before his father’s death when advancing age had slowed down that eagle spirit, the son was able to assume the onus of responsibility and carry on the old policies. He found the foundations well and firmly laid. He devoted himself to increasing 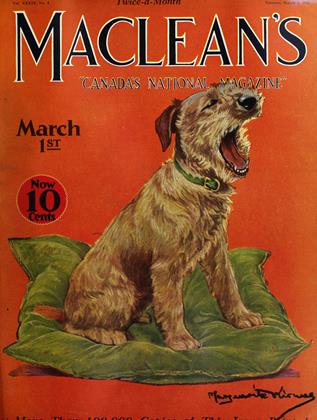