THERE is nothing unambitious about George Bernard Shaw when he picks up his pen to write. Social questions appear to be his hobby when he is not prepar'ng something for the stage, and in the Times (New York), he gives us his views on no less than three controversial subjects—Socialism, Marriage and Birth Control.

He writes in part-—

You know there is an extraordinary practicability about the human mind, men’s and women’s. Somehow or other the ordinary man or woman who has got what is called good sense—they do not allow themselves to worry about things that cannot be helped. Accordingly, if you have a man and woman married together, and if the woman cannot break up her household and go, because she has no means of existence (she can’t go out into the street and practically starve, and she does not see that she can support herself), and if the man is really in the same position—if the man cannot extricate himself without ruining himself or without embarrassing himself tremendously—-then those two people will never allow their minds to dwell on the fact that they are not well suited to each other and might do better elsewhere.

band without experiencing the slightest pecuniary embarrassment; where she would be perfectly self-supporting; where she would have an income quite independent of whether she was with her husband or not, and where the husband would be

in exactly the same position in regard to himself—naturally, under those circumstances, the social pressure that keeps very many households together being completely relaxed in that direction, a great many households would break up.

I also very much doubt whether the union would be of that extremely close nature that it is at present—I mean, the way in which married people, even under existing circumstances interfere with one another’s lives to an entirely unnecessary extent. When the economic pressure was removed, then, I think, on the whole, that the marriage tie would really literally be a looser tie. And that, I think, makes for greater freedom, and probably would make for greater happiness, in marriage.

People under socialism are happily married—well, there they are. Nobody suggests that socialism is going to interfere with them. The only question is: Is

socialism going to interfere at all? I think it is, because I do not think that any government in any well-ordered state is likely to allow two people to get together and to produce children without asking

them to register that bond in some way One does not see, beyond the fact of registration. that socialism is going to interfere with them, except at one very important point, and that point is birth control.

It is difficult to conceive of a Socialist state which does not control birth. I do not want to pretend to know what I do not know about this question. It is an extremely obscure question. The question of birth control at present, and in our present society, has been prematurely forced on us. The present agitation for it is an entirely artificial thing, owing to the bad construction of our society.

We all know, of course, that that is entirely untrue. 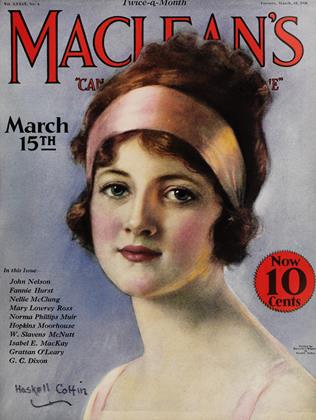