AT THE supper table, Junior, our seven-year-old question box, advanced a new problem for family pondering. “Why don’t we go touring this year?” he asked, with the supreme nonchalance of youth.

There is the basis of Canada’s humming new industry!

When you conceive an industry predicated upon the picturesque and the lure of romance there is no stopping its progress.

Basically that is the reason behind an expenditure of $188,550,000 by tourists in Canada during 1925; why men venture the hope that tourist business eventually will bring an annual expenditure within the Dominion of five hundred million dollars.

With the rounding out of provincial tourist associations last year the tourist business is placed upon a definite commercial basis for 1926. There can be no denying its increasing possibilities.

Russell Kelley, president of the Tourist Association of Ontario, estimates that $40,000,000 was left by tourists in the Frovince of Ontario last year and that this amount can be increased to at least $50,000,000 with an almost insignificant investment.

British Columbia, too, benefits tremendously from motor tourist traffic coming into the province over the great highway that links Canada with the Bacific Coast states as far south as Mexico —1,800 miles of paved roadway, one thousand miles of which may be traveled in luxurious motor buses if you have no motor car of your own for independent travel.

Dr. B. E. Doolittle, president of the Canadian Automobile Association, says “tourist trade is destined to make two dollar wheat look like thirty cents.” He made the prediction to the Manitoba Motor League, recently, that five thousand tourists, each spending one hundred dollars, would come to Manitoba annually when the province had its net work of good roads.

FEDERAL government statistics indicate remarkable increases of motor tourist traffic into Canada since 1920. For the one six-months period it has grown by thirty-four per cent.; for the two thirty-days period, two hundred and ninety per cent.; and for the one period two hundred and seventy-two per cent.

“Yet,” says A. W. Campbell, federal commissioner of highways, “having regard to the tourist attractions in Canada

and to the considerable expenditures that have been made in recent years upon main highways along and leading from the frontier, these totals are not impressive.

“The conclusion is compelling that there is real need for organized effort to increase foreign motor tourist traffic beyond any volume hitherto known. For there are in Canada, the places and things that the motorist, intent primarily on touring and camping, finds pleasure in; while of the 17,000,000 automobiles registered in the forty-eight states, approximately one-third are in motion in the states that border on Canada.”

WHETHFR tourists visit in Canadian homes; whether they stop in tourist camps; which, like mushrooms, have sprung up over the country as part of the community service which every alert town offers visitors; or whether they stop at our best hotels, they spend money here.

In the Province of Quebec, alone, last year, five million dollars was spent for hotel accommodation. Quebec and British Columbia hotels benefited proportionately. If you had visited Quebec city during the height of the summer season, as I did, and had seen the daily line-up seeking accommodation at the Chateau Frontenac and ultimately overflowing the city’s smaller hotels, you would have sensed something of the increasing worth of this tourist business.

A jeweller from Vancouver tells me that for four months of each year, at least, the tourist trade brings twenty-five thousand dollars extra monthly business. Retailers throughout the country cite similar examples of accelerated trade. Garagemen and service stations benefit to the extent of millions of dollars in the season.

Part of this retail buying is due to the fact that American tourists are permitted to return to the United States with one hundred dollars’ worth of goods purchased in Canada, without having to pay duty. Visitors invariably select diamonds, linens, woollens - those items which are imported into Canada from England and T urope under a lower tariff than they are admitted into the United States and, of course, “souvenirs.” the trade in which extends into many thousands of dollars during the vacation period.

Not infrequently tourist buying becomes more vital. Three visitors to the Vancouver camp made substantial investments in Vancouver apartment houses and business properties. A Chicago visitor to Toronto last summer motored on to Muskoka and bought a summer home there. A couple of New Yorkers bought summer properties in the Laurentian mountains north of Montreal. Another invested in British Columbia securities to the extent, that, following his recent death, the provincial government received three hundred thousand dollars in succession duties.

Establishing a production basis for one year of $189,000,000, Canada’s tourist business has become the fourth most important unit of our national out-turn. It is exceeded only by agriculture, forestry and mining.

WITH suitable organization and the rapid development of road improvement to encourage motor touring in Canada the opinion is rapidly growing," says A. W. Campbell, commissioner of highways “that this latter amount might

be vastly increased from year to year with the possibility of being doubled or trebled within a short time.”

Commissioner Campbell stresses the importance of organization and road building. Both, as a matter of fact, are going on apace. Most, if not all provinces have tourist associations; Ontario and Manitoba placed theirs upon a strong footing last year. British Columbia and Quebec have their’s under governmental auspices. Prince Fdward Island, which, within the memory of most of us, strenuously persisted in barring motor cars from its roads, is to-day definitely campaigning for motor tourist trade.

Something of the magnitude of the task undertaken jointly by provincial and federal governments may be sensed by comparison with the great transportation works of previous eras. The improvement of one of the best inland waterways systems of any country, by canalizing, was one of the first important public undertakings in the Dominion.

Then followed the railroad era. To-day there are no less than forty thousand miles of steam single track railways in Canada.

These systems are serving a country twenty times the area of the L^nited Kingdom, or, including water areas, thirty-three times that of the United Kingdom; and this area is settled by the same number of persons as live in London.

These facts, as Commissioner Campbell points out, emphasize the corresponding magnitude of Canada’s highway problem. In all, Canada has 423,000 miles of roadways of which 88.5 per cent, comprise the ordinary earth road and the balance of 48,695 miles include gravel, 34,839 miles; waterbound macadam. 12,998 miles; bituminous macadam, 547 miles; bituminous concrete, 108 miles and cement concrete, 202 miles.

THE great all-Canada road which is being laid across the continent may possibly be completed in 1927. Ontario is working this year on the Lake Superior shore sections; Manitoba is expected shortly to undertake the final mileage between Winnipeg and Kenora.

The proposed all-Canada roadway climatically and scenically during tourist season surpasses the famed Lincoln highway of the United States. It is free of desert wastes; the Lincoln highway traverses alkali desert and bad lands for eighteen hundred miles.

Canada’s tourist-attracting plans, naturally, for geographic—and “neighborly” —reasons fosters tourists from the United States, the majority of whom come to us in the modern way, in motor cars. It should not be overlooked, however, that the United Kingdom continues to send a certain number of tourists each year. Last year, for instance the ocean steamship companies lowered rates in an effort to stimulate westbound travel.

The majority of those who come to Canada from overseas cross the continent from Montreal to Victoria by railroad. On the other hand, instances have come to my particular attention of groups who last year came from England to pursue the popular vacation pastime “over there” of touring by motor caravan. These latter visitors confined their visits to Quebec and Ontario, which they toured in leisurely manner.

Fventually, no doubt, Canada’s appeal will reach out to the world, because in Canada there are vast waterways of unsurpassed natural charm; there are magnificent mountains, East and West; there are virile prairies where grows food for an entire empire; there is a great unexplored hinterland, teeming with romance. And where romance lies, imagination quickens.

Imagination makes children of us all, until, like the lad, Junior, we tingle with the desire to jump aboard the motor caravan. Thus, while a spirit of adventure persists, Canada’s chances for a broad development of tourist business appear limitless. It’s a great new crop promising dependable, annual harvest— if wisely cultivated in ail seasons.

—“Why don’t we go touring this 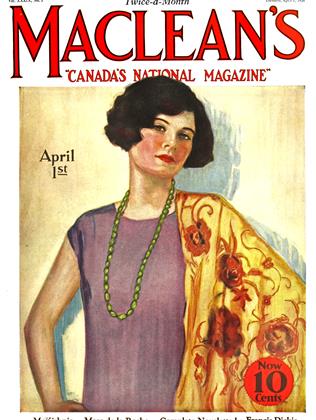