This and That about Canadians Here and There.

SOME TIME ago, when the translation of the Hon. C. A. Dunning to Ottawa made it necessary to choose a new premier for Saskatchewan, the names of three of his ministers were on everyone’s lips. The premiership lay between the Hon. J. G. Gardiner, who subsequently was chosen, the Hon. C. AM. Hamilton and the Hon. S. J. Latta. The west being pre-eminently the sphere of young men, perhaps anno Domini had something to do with Sam Latta’s dropping out of the race.

To know the early history of him whom the reference books dignify with the title of “Honorable Samuel John Latta, Minister of Education and Provincial Secretary” is to realize that he is fully entitled to a place in Western Canada’s scroll of fame. More than twenty years ago Sam Latta homesteaded in the Last Mountain Valley, He was the creator of a live weekly, “The Prairie News,” published at Govan, Saskatchewan, and general Pooh-Bah of that thriving centre even before the steel bands of the Canadian Pacific Railway Pheasant Hills branch connected it with the outside world.

In the early days of the Last Mountain Lake country, around 1904, Sam and a whole tribe of the Latta clan came west from London, Ontario. He had been principal of the Colbourne Street School there. Sam was on the right side of forty then—tall and spare, his sandy hair, which was usually somewhat darkened with a smattering of printer’s ink, already growing thin on top. His physical make-up was never what one might call robust, but what he lacked in bodily vigor he made up in fiery energy and in that unquenchable determination to succeed which lay behind his deep-set eyes. “Pep” is a vulgar word, perhaps, to apply to a Minister of the Crown—but “pep” is what Sam Latta had sticking out all over him. The town of Govan soon was known as “The Hub” under his persistent propaganda. With him as councillor and secretarytreasurer of the municipality, the district became one of the livest and best organized in Saskatchewan.

He was a pillar of the church, too. At first we were content to worship the Almighty in the village blacksmith’s shop, what time Padre Alexander, a courageous little Presbyterian sky-pilot, used to sit cross-legged on the anvil and bring forth strange sounds from his fiddle, in lieu of a harmonium. But Padre Alexander went back to Scotland to be replaced by a Methodist sky-pilot. The fine edifice which was built during his tenure owed much to the future cabinet minister.

Sam and his brother Charlie, who unsuccessfully contested the South Okanagan constituency of British Columbia at the last provincial election, were the local magistrates in those far-off days. Govan boasted a lawyer even in its infancy, and although he was young and may not have known much about law, he could look mighty wise behind a stack of leather-backed law books —bought on the deferred payment plan—in the sample room of the hotel where court was held. There was dignity to Sam Latta’s court—while the trial was on—> but once it was over it was not unusual for magistrates, counsel, police, and even prisoner, to adjourn to a room nearby which had a well-placed brass rail for the right foot, there to discuss the “impossible” day w'hen prohibition would come to the west.

Official duties give His Majesty’s minister little time for reminiscing, but the Honorable Samuel John Latta even now finds time to recall his early days of pioneering in the west. Homesteading twenty years ago was a hard school, but one which turned out great-hearted, courageous men fit to hold high place among the elected of the people.

THERE must be an unrecognized niche in the inventors’ wing of the Hall of Fame reserved for John Connon, of Elora, Ontario, whose research and inventive labor in photography gave the world the panoramic camera. Now sixty-four years of age, Mr. Connon still lives in his native village, whose beauty added stimulus to his devising of an instrument which would show its charm in detail.

His father, the late Thomas Connon, designed the film roller which is universally used on cameras to-day. With the advent of transparent celluloid film, the new invention led photography from the studio into the great outdoors. To take a picture in the old days meant carrying a heavy camera, focussing glass, focusing hood, tripod and a battery of heavy glass plates.

Comrades in the same workshop, John Connon and his father worked out their photographic successes together. When twelve years old, the son, born May 26, 1862, was given a corner of his father’s dark room for his own use, with separate silver bath, collodion, and other photo equipment. As soon as he was old enough to carry it, he also had the use of his father’s stereoptic camera.

When he was twenty, John Cannon produced the first of his outstanding inventions—-a new kind of shutter for the camera and eight years later the invention was still new enough to be patented. It is United States patent No. 451,027, filed June 13, 1890.

Early in February, 1887, he finished the construction of the first whole-circle panoramic camera which was patented in Great Britain, Canada and the United States. It revolved horizontally like a locomotive on a turntable and photographed in succession everything at which it pointed.

In The Mail and Empire, Toronto, a short announcement of his discovery was printed that year. It said, in part:

“The leaders of the photographic art have for a long time been making experiments which would extend the range of view that it is possible to photograph at one exposure. So far every attempt has met with failure. Now, however, Mr. J. R. Connon, of Elora, comes to the front with an invention which accurately covers the ground. The instrument is small, easily carried and can be worked by anyone possessing only a slight knowledge of photography.”

Just when Messrs. Stirn and Lyon, of New York, were ready to produce the camera, to be advertised as “The Wonder Camera,” the new transparent celluloid film came on the market in 1890. Buying the first of this that was sold in New York, Mr. Connon made sample pictures of scenes in and about New York, the camera working perfectly.

One of the pictures was of Brooklyn Bridge taken from the deck of a Fulton Street ferry boat, showing the bridge with New York and Brooklyn in the same picture. Broadway, with horse cars and buildings six to seven stories high was also photographed'and another picture he took was of the S. S. Majestic, on her first trip out of New York in March, 1890.

The photographs made by Thomas Connon and his son during the long period beginning 1859, when the former made his first photos for money in Elora, to the present day are a priceless legacy left to Canada. In his studio many of the early settlers, famous in Canadian history, sat for their pictures and these are being preserved by John Connon for posterity.

Fond as he is of photography, the inventor of the panoramic camera would rather collect and write the local history of long ago than take pictures. But once a year he does what every year his father did—takes a photograph of the waterfall, the gorge and the river that is said to be older than Niagara, which flows through the village.

“It does not bother me that neither my father or I ever received any financial profit from our inventions,” he says. “I find my satisfaction in going through old manuscripts and papers and in making a permanent record of the historic background of Elora.” 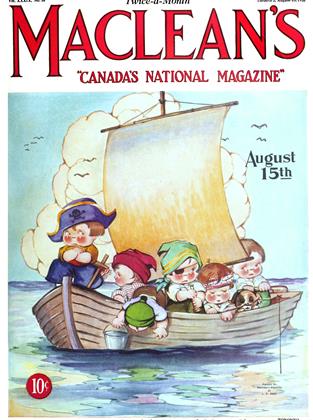