POPULARITY of United States motion pictures is distinctly on the wane with the German theatre public in spite of the fact that large American film corporations made considerable investments in German playhouses with a view to obtaining a “dollar strangle-hold” on German business. This is what we are told by Sir Robert Donald, G.B.E., LL.D. writing for the Daily Mail (London), regarding recent observations during a trip on the Continent. On the other hand, Sir Robert finds that British films would be welcomed in Germany, if the Germans could obtain financial help from Britain. Meanwhile, Germany is inaugurating what is known as the quota system, a government measure, whereby only one

foreign film may be imported for every one produced in Germany. Says Sir Robert: A leading producer, discussing the subject with me, was only expressing with emphasis the general opinion of all sections of the industry when he said, “The German theatre public resent the cheap, vulgar American films. They are altogether at variance with German mentality. In many cases the film exalts lawlessness and has a demoralizing influence. Horseplay represents comedy, sloshy sentimentality stands for drama. The American film comes out of a factory like so many yards of cotton. The German public will not have such rubbish. They are not narrow-minded where the theatre or entertainment is concerned. There are four English plays now running in Berlin, and we would welcome English films— but our public are fed up with vulgarized screen productions.” Others whose views I obtained— owners, producers, actors, officials of trade organizations, and editors of film newspapers—all agreed that the public were sick of American productions, always excepting the big pictures, international in character and appeal. One striking difference between the situation in Germany and in England is that on this question the whole trade in Germany is at one. The ordinary American films have ceased to be a draw. Boxoffice returns prove that the takings are less when American films are shown. On every hand I met with a readiness to co-operate with British producers and a strong desire to obtain English financial help in preference to American. England is not considered menacing as a partner or formidable as a competitor. The Germans in the trade think that our interests are more or less complementary to their own. Our outlook approximates more closely to theirs than does the American. They draw a distinction between European mentality, with centuries of history and culture behind it. and the American, which is not yet so highly developed. While they prefer to begin with British co-operation, they hope to see a close association between British, French, Italian and German producers. 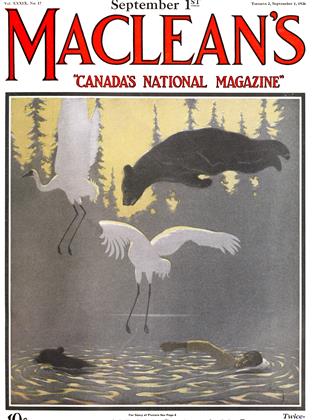