SOMEWHERE in Peru there are 199 persons wearing Made-in-Canada canvas shoes with rubber soles for which they paid $108.

Somewhere last year on the St. Pierre and Miquelon Islands—those intriguing overseas possessions of France off the coast of Newfoundland—433 bushels of Canadian onions were consumed.

And somewhere in prohibition United States $12,572,000 worth of Made-inCanada whiskey was disposed of.

Count these items amusing or count them of consequence, as you will, they are all incidental in the passing year to the building up of Canada’s enormously expanding foreign commerce.

It is surprising the amount of interest that lies hidden within the covers of one of the blue books of the department of trade and commerce. If you will take a leisure hour you will find therein ample for entertainment and education. A year’s barter with the world, which reaches the vast aggregate of $2,255,000,000 cannot .be other than fraught with romance, tradition, scheming and planning—all the color of international enterprise.

It is not just a happen so that 199 Peruvians last yqgr bought 199 pairs of Canadian-made canvas shoes with rubber soles.. It is only a $108 transaction to be true and the profit on such a single turnover must be trivial. But the significance lies deeper—it lies in the fact that two years prior the sale of Canadian made white canvas shoes with rubber soles to Peruvians totalled only eleven pairs, worth $10.

/sa single transaction, the sale of 199 pairs of white canvas shoes is unimportant perhaps. But in the fact that 199 pairs of these shoes were sold in 1926 as compared with only $10 worth or eleven pairs in 1924 lies the real significance of the transaction. For it is by reason of this increasing disposition of the Peruvians—and all the world buyers—to take more and more steadily more of our goods that Canada’s international commerce is so rapidly expanding. We can scarcely sense the amount of propaganda which entered into the selling of the first eleven pairs of Canadian made white canvas shoes to the South American republic.

I recall the experiences of one of the first men who went to England, representing C anadian* canners, in an effort to sell canned tomatoes to Englishmen. He was confronted with an almost impossible task. It was long before the days of canned tomato weeks! It required more than the ordinary educational campaign to put over canned vegetables from Canada on the British market. Your average Britisher disliked tomatoes.

It is something to change the traditional appetite of a nation. Witness, too, the growing disposition in the Orient to eat wheat bread—made from Manitoba

These are items which originally required real merchandising—if not strongarmed salesmanship.

Instances of a similar nature might be recounted without number. This, and the growth of our sales in innumerable other Canadian products is tribute to the untiring energies of Canada’s couriers of commerce.

With the products that bulk more largely in our international trade it is quite another matter. The United States, for instance, buys heavily of our wood pulp and our newsprint. Last year the United States bought $96,000,000 of Canadian newsprint as compared with $87,000,000 and $89,000,000 in each of the previous years. But it is doubtful if the merchandising of this vast quantity of newsprint required more downright creative selling enterprise than did the original merchandising of the eleven pairs of white canvas shoes with rubber soles in Peru. For the reason that the United States must have newsprint to satisfy the all consuming maw of its vast printing enterprise, to satisfy the insatiable appetite of Americans for their daily reading matter in the form of magazines and newspapers.

So, too, our Canadian sale of $30,000,000 worth of meat products to the United Kingdom. Our British cousins must be fed, and as they do not grow on their tight little island all the meat they need for their hungry millions of population, they must buy abroad and Canada is a logical source of supply.

This, then, is why the item of white canvas shoes to the Peruvians is the more intriguing, the more significant—minor as it may appear at first thought.

FOREIGN trade is a fascinating consideration, with vast popular elements. I am fascinated as I look over the government blue book for the last fiscal year— which is the twelve month ended March 31, 1926. I am fascinated by the penetration of our commerce. Pass over the strategic points, the big business centres of Canada which one would naturally look to as contributors to the nation’s trade, and you will find the most unexpected places lending their quota to the gradual extension of the country’s business with the world at large. Arichat, Nova Scotia —ever hear of it? I confess I never did, begging their pardon, those who live in what may be a delightful and ambitious community—exported $88,000 worth of products in the past year, while accounting for imports to a value of $3,200. Good for Arichat for such a healthy favorable balance, at a time when the Dominion is striving greatly to bolster its economic position. Paspebiac, in the Province of Quebec, rises to prominence with a $355,000 export contribution, and imports of $40,000—again in the favorable balance column of our foreign trade.

From whom do we Canadians buy, then, and to whom do we sell in this great year round struggle for economic prominence?

Let us consider our trading relations with the British Empire. Bulking largely and of first importance as a customer, is our trade direct with the United Kingdom,

which accounts in the last year for $508,000,000 or nearly twenty-five per cent, of our entire business with the world. Next, follow the Oceanic dominions, Australia, New Zealand, Fiji, and their sister islands. New Zealand alone buys $16,000,000 worth of Canadian goods and Australia nearly as much. South Africa is an important buyer, last year taking $9,000,000 worth of our products and India, $7,000,000. Even into distant Gambia $3,200 worth of Canadian goods found their way last year.

The couriers of commerce have plied their mission well.

A glance at the list of foreign countries which were Canada’s customers last year is a veritable lesson in geography—if not indeed a puzzler for those of us who have been away from school for a decade or more!

Lettonia, Liberia and Lithuania all took of our goods. Lettonia, in fact, took half a million dollars’ worth of Canadian products. North, to Iceland went $53,000 of Made-in-Canada merchandise. Portuguese Asia was our humblest customer, with a $276 purchase—but should we quibble at the amount, should we not rather consider that the way has been opened to our trade couriers? 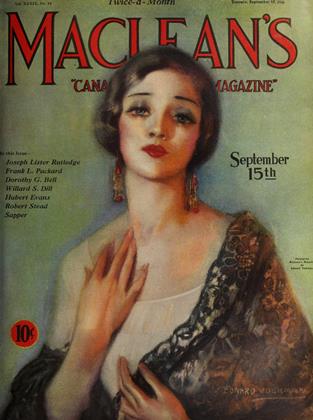