The Investor’s Survey of Canadian Industry A. W. BLUE October 15 1927

CANADIAN interest in the petroleum industry centres largely in the refining of crude petroleum, and the distribution of gasoline and by-products, rather than in the producing end. Despite the expenditure of millions of dollars in extended exploratory and development work, domestic production continues to fall far short of requirements, and the deficiencies are made up by importations of the crude product from the United States or South American fields. The development of the automobile gave tremendous stimulus to the refining end of the industry, with gasoline the product of principal importance and for which there is a steadily expanding market. Prior to the advent of the automobile, kerosene was the staple product of the oil industry, with lubricating oils occupying a slightly secondary place. But in this industry, as in many others, the motor car has been a revolutionary factor, and today, an important group of companies are engaged in the business of extracting gasoline from crude petroleum and distributing the refined product from coast to coast. The business is a remunerative one, and the public investment interest in companies engaged in this type of industry has grown in a remarkable manner in recent years. Nor does it seem that the industry has reached the zenith of its possibilities. The use of the motor car is growing by leaps and bounds. Some 836,000 automobiles were registered in Canada in 1926, and the market is still far from the point of exhaustion. The operating companies are keeping pace with the steadily expanding markets for gasoline and allied petroleum products, and shareholders continue to enjoy a highly profitable experience.

Dependent on Outside Markets

HTHE one disappointing feature of the T petroleum situation is our inability to supply our requirements of the crude material. We are almost wholly dependent on outside markets. So long as production in the United States keeps up at the present record figures no hardship is imposed, but once the output across the border begins to slacken off, and it is logical to assume that the present tremendous production cannot be maintained indefinitely, some restraint may be felt here. However, the situation is not ■viewed with any alarm by Canadian oil men. Canadians have vast potential oil resources in South America which are beginning to come on an extended production basis, and it is estimated that reserves there will supply our anticipated requirements for many years to come. Furthermore oil authorities believe in the existence of an immense pool under the strata of Western Canada, the exact location of which has thus far eluded the explorers. But that oil will be discovered in quantity some day, and perhaps when the need for the domestic crude produce

is more urgent than it is at present, is the firm belief of those whose opinions count. Recent developments have been concentrated in the Turner Valley of Alberta, where Royalite No. 4, one of the richest wells in the world, and owned by Imperial Oil, Limited, is the most important contribution to date.

Due mainly to favorable results attending large scale development operations in the west crude petroleum production in Canada last year showed an encouraging increase over the total of the preceding year. The year’s production amounted to 364,603 barrels valued at $1,313,730; in 1925 the total was 332,001 barrels, worth $1,250,705. Alberta’s production, mainly from Royalite No. 4, reached a new record of 217,088 barrels. A decline in the output in Ontario was shown when 136,971 barrels were produced.

THE following table indicates the trend of petroleum production in Canada since 1911 :

Concerning the development operations of his company in Western Canada, the most important in progress to-day, President C. O. Stillman, of Imperial Oil, Limited, has issued the following statement: Tn Western Canada our efforts to develop a domestic supply of crude petroleum have been continued with unabated vigor. Our geologists have defined for us two broad divisions of the western provinces: the Great Plains and the Foothills belt. The latter, though much the smaller in area, gives larger promise on account of its more pronounced structures. Both of these areas have received our attention during the past year.’

Three wells in the Plains area represented the sum total of the company’s activities in that field last year and concerning results President Stillman says: ‘It will be noted that although success has so far eluded our efforts, we are encouraged by the indications of gas and oil, which may tend to show that commercial production is within the realm of possibility.’

In the Foothills region more intensive operations are proceeding, especially in Turner Valley. ‘Although drilling in the

Hundreds of thousands of dollars are lost annually in Canada through careless investment. Fraudulent and worthless securities arc being constantly poured on to the market to entrap the unwary. A general observance of this simple maxim will assist in the reduction and elimination of this economic waste—

Turner Valley fields present extraordinary obstacles, the prospects are encouraging, as the producing wells brought in by the Vulcan, the Illinois-Alberta, and the MacLeod Companies and the encouraging shows in other wells indicate a large area over which production may be expected, and upon which our leases are favorably situated.’

In addition to Imperial Oil, Limited, a large number of small independent companies have engaged in drilling operations in the adjacent territories. Two large American interests have entered the field. The Marland Oil Company has made an agreement with the Hudson’s Bay Co. to develop acreage not already held by other producing companies. A new company, the Marland-Hudson’s Bay Co. has a number of parties actively engaged in geological work. In addition the Doherty interests of New York have acquired a large block of acreage in Southern Alberta.

CANADA possesses other potential oil resources in the tar sands of the Mackenzie River basin. The area of these deposits is estimated at 10,000 square miles, and the statement is made that they contain sufficient petroleum to supply the world’s needs at the present rate of consumption for two thousand years. Added to this are the rich oil shales of New Brunswick, with outcroppings of lesser importance scattered indiscriminately throughout the country. There are enormous possibilities in this field in Canada, which are only beginning to be realized.

There follow brief analyses of the leading oil refining and distributing companies of the Dominion, whose securities have attracted a broad public following.

Of an authorized issue of capital stock amounting to 1,600,000 shares of no par value, there are 1,307,304 shares outstanding. In December, 1926, the old capital stock with a par value of $£5 was split on the basis of four shares of new no par value stock, for every one of old. Dividends have been paid regularly since 1909, with occasional adjustments upward. The present scale of distribution is twenty cents per quarter or eighty cents per year. The company has no bonds outstanding or indebtedness to the banks.

British American Oil is one of the largest distributors of gasoline and oil in Canada, with refining facilities and distributing organizations scattered throughout the Dominion.

The capital stock of Imperial Oil, Limited, comprises 8,000,000 shares of no par value authorized, of which 6,400,000 shares are outstanding. Dividends are payable at the annual rate of one dollar per share. An extra of twenty-five cents per share was paid November, 1926, and 12% cents extra paid in March, 1927. In November, 1915, a 100 per cent, stock bonus was given to shareholders. A rate of six per cent, was paid in 1915, eight per cent in 1916 and 1917, and twelve per cent, commencing December, 1918. In July, 1918, a bonus of five per cent, was paid in Victory bonds. In January, 1925 four new no par shares were given for each old $100 share, and the dividend was raised from seventy-five cents quarterly on the old shares to twenty-five cents quarterly on the new. The company has no funded debt, and does not issue a financial statement.

Investors in Imperial Oil Limited, have had a satisfactory experience. Approximately $50,000,000 has been distributed to shareholders in twelve years on an original capitalization of $10,000,000. Imperial Oil is a member of the Standard Oil group, and controls in turn the International Petroleum Co., Foothills Oil & Gas, Imperial Oil Refineries, Limited, Imperial Pipe Line Co., and

Royalite Oil Co. Imperial Oil engages in the business of refining and distribution of gasoline and other petroleum products. The company is a powerful organization, strongly entrenched in the Canadian

field, and is looking to the future with confidence. The International Petroleum Co. is an asset of primary importance.

Dividends have been paid on the preferred at the annual rate of eight per cent, without interruption for the past eighteen yea.T. The common stock, was recently divided on a six for one basis, and its status changed from $100 par to no par. The dividend was raised from five dollars per share on the old stock to one dollar per share on the new, or equal to six dollars on the old. There is no funded debt. The company refines and distributes gasoline and oil products. It maintains some seventy-five stations throughout Canada, and in recent years its business has shown substantial expansion.

The preferred and common stock receive the same dividend, seventy-five cents per annum. The company is a subsidiary of Imperial Oil, Limited, and thus is linked up with the powerful Standard Oil group, with the experience, and technical ability of that organization behind it. The company owns important concessions in South America, in Peru and Colombia, on which extensive development operations have been undertaken. The Tropical Oil Co. is a subsidiary, and its Colombia holdings have been established on a highly productive basis. Crude oil is shipped from the southern fields to the refineries of Imperial Oil, and a thriving trade is also conducted in the South American markets. Controlling as it does one of the most important partially developed oil territories in the world the future of the company seems assured. The shares are listed on the New York Curb market, and the unlisted section of the Toronto Stock Exchange. The company does not issue a financial statement.

Out of an authorized issue of 400,000 shares of no par value common there is at present outstanding 150,000 shares. The entire preferred issue was recently retired. There are no bonds or bank indebtedness. The company engages in the wholesale and retail distribution of petroleum products. Organized some fifty years ago, McColl Bros, was privately controlled until a year ago. Although the shares have been on the market a comparatively short time they have shown sharp appreciation in value. The common is at present paying dividends at the annual rate of eighty cents per share.

Dividends are paid regularly on the Class A preferred at a rate of seven per cent, and on Class B at six per cent. The Class B issue is held by the old shareholders who originally started the business. One of the younger members of oil refining group this company has made substantial headway in the business of distributing gasoline and other petroleum products, and controls an important chain of wholesale and retail stations located at important points in Central Canada. A new issue of preferred was placed on the market during the past summer to provide funds to care for contemplated expansions. 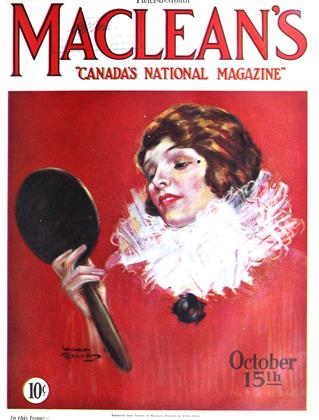