Great Music Critic Defends His Attack on the Glorification of Syncopation.

l series of Biographical, Scientific, Literary and Descriptive articles, designed to keep t¡linking man and woman in touch with significant happenings in the world of to-day.

CERTAIN colored gentlemen having their habitat on the so-called 'Barbary Coast', San Francisco, many years ago decided to enliven the dancing tune of commerce by certain emphatic—and extempore—rhythmic distortions of their own. The result came to be called jazz. As dance music it had a distinct appeal h ;• the musically patriotic musictasters of the United States were not content to let it remain the lowly handmaid of the gliding toe or tapping heel: they asserted that this 'jazz’ was the only truly representative American music—as, no doubt, it was. After a while, their adulations reached the sensitive ear of Great Britain’s greatest music critic, Ernest Newman, who found the jazzists laying profane hands on some of the greatest

In the Times ' London', he warned them to 'keep their dirty paws off their betters’, a statement which annoyed the Whitemans and other exponents of what ridiculously was called ‘symphonic jazz’. They retorted with some spirit, and in the New York Times Newman lets them have the conclusion of the matter when he says:

Whatever may be the case in America, I beg to assure^the American public that in England the thing, regarded as music, is dead. We all found it amusing for a little while at first; it was like a new cocktail. But when the novelty of it had worn off, musical people^became sick and tired of it. I doubt whether a single musician of any standing could now be found in my country to say a good word for it. As music the thing has simply become an infernal nuisance and an unmitigated bore. It is solely its popularity for dancing purposes that keeps it in the public eye and ear; it is still unequaled as a medium by which fair women may perspire in the arms of brave men.

‘My “case against jazz”, then, is purely and simply a musical case. It is as a musician that I object, for one thing, to the ordinar;r jazzing of the classics. Not that I would ever object to a clever musical parodist exercising his humor at the expense of any master. But to do this acceptably he has to be a master himself; there is nothing more delicious than firstrate parody, but it takes a first-rate mind to do it. The jazzsmiths, however, speaking generally, are not clever enough to make their manipulations of the classics tolerable. They are not artists in the sense that the great literary parodists have been; they are merely hearty, grinning chaw-bacons.

'It ¡s one thing to have a good picture turned into a thing of harmless fun by some one who is himself a quick-witted artist; it is quite another thing to have it scrawled over by a moron. The average jazzsmith, in his would-be humorous treatment of a classic, is merely a street urchin who thinks he has been smart when he has sidled up to a poster when no one was looking and added a moustache to the upper lip of the beautiful lady who figures in it. My gentle exhortation - to the jazzers to keep their dirty paws off their betters has been grievously misunderstood; to get the true sense of it, it should be read with the accents on “dirty,” “paws” and “betters.”

‘Roger Kahn saddened a whole bright Autumn day for me by saying that he had read my article “with great indignation,” and also “expressed himself,” to an interviewer, “as opposed to the jazzing of classical music”. I myself would not go as far as that. If any jazzist will write me a musical commentary on something of Chopin’s or Grieg’s that is as witty as, say, J. C. Squire’s parodies of Byron and

Wordsworth, or Mr. Sidgwick's of W. B. Yeats’ “Innisfree,” or Brahms’ treatment at certain points of a theme by Paganini, no one will be more pleased with his effort than I. All I object to is the practice of a very difficult and subtle art by thick-fingered bunglers.

‘Paul Whiteman thought he had convicted me of inconsistency when he said that “Strauss took other men’s themes and developed them characteristically; Newman hails him. We borrow themes and develop them in our style, and Mr. Newman objects.” Quite so; the difference is simply that Strauss is Strauss and “we” are “we”. “There is no protest,” said another jazz apologist, “when Dvorak puts a negro melody into a symphony.” Precisely; for Dvorak is Dvorak. The negro melody is bettered by Dvorak’s treatment of it; but the cantabile melody of Chopin’s “Fantasie Impromptu” is decidedly worsened by Harry Carroll’s treatment of it in “I’m Always Chasing Rainbows.” He has simply made the poor tune commit, so to speak, hari-kari on Chopin’s doorstep. 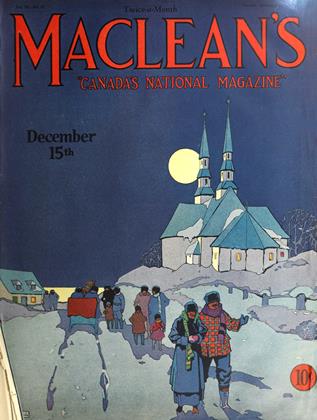