DURING the first two or three years following the return to Canada of her troops, the Canadian daily papers had a unique situation to face. They had almost to consider the printing of a ‘Daily Wedding Special,’ for so many white-clad girls and white-faced boys were one-stepping into the churches to the best known tune from Wagner’s Lohengrin, and two-stepping out to Mendelssohn’s Martial Melody, that the regular editions were hard put to it to find space for all the wedding accounts.

Naturally, it follows that there will be myriad Wooden Wedding celebrations held during the next few months, some of them elaborately conceived affairs, into which the matter of cost does not enter, and others, delightfully informal little house parties, where the guests, knowing how much initiative and happy work has gone to make the party a success, enter into it with all the zest they possess, and make the simple affair a memorable one as it was meant to be.

Many of the June weddings of 1922 were quite as much ‘war-weddings’ as were those solemnized bef ore November 11, 1918, and the homes which were then founded were very unpretentious and kept up, solely by the young husband’s meagre weekly pay.

It was to a ‘Wooden Wedding’ in one of those simpler homes to which Bob and I were invited, recently, and though we went, later, to a similar affair gi\ en in a large hotel, there was no comparison between the two parties, so far as actual enjoyment was concerned.

In the first place, our invitations were received, quite as though it were a wedding, three weeks in advance, and were printed in india ink on birch-bark, stating that:

request the honor of your presence at the celebration of their

The Problem of Gift Getting

T DISCOVERED who the other guests were to be, and we girls got together and did a bit of planning on our own. We knew that, ever since she had been married, Betty had wanted a tea-wagon and that, to date, it had not been forthcoming, and we decided that rather than each of us taking some finicky kitchen utensil, we

would all club together and buy the tea-wagon to match the dining room suite. The boys were willing, for their ideas as to what to get Tom had all converged upon the same thing—a pipe, and when it came to Betty’s gift they were all at a loss, and were delighted to find such a good way out of the dilemma of gift getting.

As a matter of fact, the guests at the Wooden Wedding were the same four couples who had been closest to the bride and groom at the time of their marriage. I had been matron of honor, with Bob as best man, while two of the other girls had been bridesmaids and the third had been soloist, with the boys as ushers. We had pooled our funds at the time of the wedding and bought a silver, electric, coffee percolator with cream-pitcher and sugar-bowl to match and a walnut tray which held all three pieces and still had room for cups and saucers, so we felt that the tea-wagon would fit in nicely with our other ‘community gift.’

Tom and Betty met us at the door of their little house, Tom in his dinner-jacket with a white rosebud in the lapel, and Betty in her wedding dress of white satin. She wore a corsage of deep crimson roses and didn’t look

a day older than when she was married five years ago.

“Tom made me get a maid for to-night, and she’ll serve and wash up so I haven’t another thing to do,” she confided to me. “Isn’t he a dear?”

Soon the others came, and with Tom and Betty in the living room, it was a simple thing for Bob to smuggle the tea wagon in from the house of the next-door neighbor, who had kept it for us, and arrange with the maid to wheel it in at the proper moment, with the coffee service on it. At six-thirty, sharp, we were ushered into the dining room and greeted the dainty table with cries of astonished delight. We knew pretty well what Betty had to work with, and had not been prepared for what we saw.

IN THE centre of the table was an eighteen-inch log, hollowed out and filled with Gypsophila, forget-menots, purple and yellow pansies, and pink snapdragon. The trailing plant which we call ‘Wandering Jew’ overhung the edge of the log and trailed along the round mirror which the log rested upon, and in which were reflected the flowers and their green.

Cluny mats took the place of a large cloth on the table, and there was no light, other than that given by four blue candles in their tall candlesticks. At each place, were

dainty place-card cupids ringing wedding bells, held upright by the snap of wooden clothes’ pegs, which Betty had enamelled white and further embellished with a spray of roses, done in sealing wax.

“I didn’t know we were going to be swanky and have a maid,’’ whispered Betty, “and so I had planned not to have many dishes—for I knew you girls would insist on doing them.” She waved a hand at the fruit cocktails which were at our places in small, sanitary, drinking cups, each one resting on a paper lace doily. The fruit was chilled and delicious with its sprig of mint atop, and the paper cups might have been frosted glass so dainty did they look on their glass plates.

The maid removed them and we all shouted with mirth when she brought in a pile of wooden picnic plates and put them before Tom.

The roasted chicken had ruffles around his beautifully browned legs, and from his middle there waved a banner, upheld upon a There were browned potatoes, new carrots, and French peas served with the chicken, along with Betty’s pickles and her own crusty rolls, and butter which had been tossed into balls and then chilled.

The salad, made of cabbage, celery, pimentos and sweet green peppers, was firm in a savory jelly, and was served with carved wood salad-servers from Betty’s white wood mixing bowl, and we ate it from the painted wood fingerbowls, from China, which had been among Tom’s and Betty’s wedding presents.

By this time, we simply were lost in admiration at the effect which Betty had achieved at a comparatively small outlay, so that when the dessert course proved to be the top layer of the wedding cake and a frozen mousse, in a bell-shaped mould, we were at loss for words with which to express our wonder.

There were nuts and marshmallows and glace cherries in the mousse, but it was tart with pineapple, and perfectly delicious.

“Now,” said Betty, “before we have our coffee, we’ll have our favors,” and touching the little silver bell which she had used during the meal with such delightfully important self-consciousness, she directed the maid to bring in “the last course.”

A Trunk of Memories and Favors

IT PROVED to be a large-sized wooden doll’s trunk, gay with replicas of the posters which had proclaimed their newly married state five years ago—posters for which we, who were present, had been responsible. Betty very importantly unlocked the trunk, threw back the lid, and from the tray lifted out ten strands of white ribbon, to the end of each of which was a tiny wooden tag on which a name was printed. The maid removed the mirror and log from the centre of the table, and placed the trunk there; then Betty distributed the tags to their owners, and lifted out the tray, beneath the edges of which the ribbons had disappeared.

“Now, starting with Hilda at Tom’s right, we’ll each draw in turn,” she cried excitedly, and amid laughter and jokes the drawing began.

We girls all drew oblong boxes, which when opened proved to be filing cabinets for recipes, with some of Betty’s best recipes neatly written on the cards inside. The boys received small pipe or cigarette lighters of copper, and, needless to say, we were perfectly delighted with our gifts.

“What did you draw, Betty?” asked Hilda.

“I don’t know yet,” she said, trying to untie the knots in the string around a small grey-wrapped box, and Bob obligingly cut the cord. We all were watching her, but I stole a glance at Tom and when I saw the shine of his eyes I knew that Betty was going to get a real gift.

“Tom!” she breathed as the little silver box sprang open, “Oh, Tom!” and we saw that Tom had bought, for his five-year old bride, the engagement ring he hadn’t been able to afford before their marriage.

The little narrow box which he had drawn, lay forgotten at his place, and when Betty found no words, but just kept her eyes down upon the gleaming ring in the little box, I knew how she felt, and stole silently from the table and into the living room, whither the others followed, all except Betty and Tom who were not at opposite ends of the table now. We gave them five minutes, and then Bob, with his serviette over his arm, knocked long and loud on the door and announced: “Coffee is served in the living-room, madam.” Tom had his arm around Betty when they came in. Her ring was on the finger which bore the plain gold band, and the diamond in it was no more brilliant than Betty’s eyes, with the tears of happiness still shining on their lashes. Tom coughed loudly, and fingered his tie, and we crowded around to admire the tie-pin Betty had bought for him— a slenderthreaded spider web of platinum with a small diamond dew-drop in it’s centre.

“Said she didn’t want a new dress for this party, little story-teller,” he grinned.

“Neither I did, I wanted to wear my wedding dress,” protested Betty, “but you have been wanting a dictaphone in the office so badly Tom, and now—and you needed it, too.”

“Only chance I get to talk is at the office,” stated Tom, “and I don’t think canned conversation is the best thing for office discipline anyway.”

“Aren’t we going to have our coffee?” asked Hilda, and then Bob placed Betty in the cathedral chair which is much too big for her, and Art wheeled up the teawagon and you should have seen the eyes of the bride and groom.

Betty confided to me, later, that it had only taken five dollars over and above her regular allowance, for the party, and talking of it since, the crowd have agreed that if it had been a formal affair or even a perfectly correct informal one, it wouldnot have been nearly the fun it was.

It is not, of course, essential, that either the menu or the plan followed in this case be adhered to, but if you haven’t a great deal to spend, and yet want a Wooden Wedding party, the general plan of Betty’s party would not be a bad one to follow. 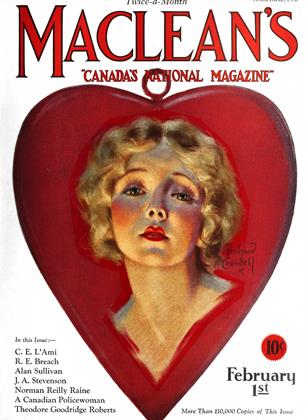