THERE is both the element of romance and considerable food for economic consideration in this ‘rolling back the boundary of the agricultural belt in the West’, as the Toronto Globe expresses it.

It was little more than one year ago that the Canadian public first heard about Garnet wheat. The Ottawa Journal, at the time, hailed this new wheat as a ringing answer to the supplication of millions: ‘Give us this day our daily bread.’ At that time the possibilities of Garnet wheat were merely being guessed at.

Now, at the outset of another harvest season, we have the results of 1926 to guide us. These will be accepted as the first definite achievement of a new wheat, aside from the demonstrations which Garnet has made in the Experimental Farm. Garnet wheat the Financial Times tells us is ‘pushing the map northward’.

The report of the Dominion Cerealist, according to a statement lately issued by the Dominion Department of Agriculture, indicates clearly that finality in producing superior varieties of wheat has not been reached. In short, the experiments in new wheat at Ottawa are assuming increasing significance each year. We can scarcely more than guess at the possibilities of the new wheat in their relation to Canadian business.

Compared with Marquis, which was long accepted as the Canadian standard in wheat, many of the new varieties give excellent promise, not only in early ripening, but also in yield and in weight per measured bushel. The Canadian business man immediately senses the importance of an early ripening wheat and a wheat which shows greater yield tendencies. Whereas Marquis took 109.8 days to mature in 1925, Reward took 102.8 days, Garnet took 104.2 days, while Huron, another promising variety, took 111.8 days. In the matter of yield, Reward gave 92 per cent, as high as Marquis and gave grain weighing 65.8 pounds to the bushel as compared with 63.8 for Marquis. Garnet yielded at the rate of 108 per cent, of the rate for Marquis and weighed 64.9 per cent, pounds to the measured bushel. The yield of Huron was 109.8 per cent, of that of Marquis and its weight per bushel 64.1 pounds.

These varieties were included in tests made with eighty-seven named varieties, thirty-nine numbered varieties of common spring wheat, nine Durums, and four varieties of emmer and spelt, records of all of which are shown in the report of the work done in the cereal division of the department of agriculture in 1925.

Garnet’s achievement ‘is expected to make possible the maturity of wheat onehundred to one hundred and fifty miles farther North than other varieties’, stresses the Toronto Globe.

Page your high-class statistician! Only an expert juggler with figures could hope to sketch the definite possibilities opening up with the further development of the new wheat’s possible maturity in a northern belt one hundred to one hundred and fifty miles beyond the region where wheat is now harvested in Canada. Marquis wheat clipped off the growing season as

compared with earlier kinds. Each step in this direction widens the land of the prairies available for cultivation and adds millions of bushels to the potential production of Canadian farms.

‘Altogether amazing is the yield of Garnet wheat in some sections’, says the Saint John Telegraph-Journal. ‘We are told of one small farmer who harvested sixty-four bushels to the acre. Where other varieties of wheat are nipped by the early frost, Garnet, ripening earlier, escapes. Just what this means in terms of wheat production in Canada it is not easy to estimate.’

The Calgary Albertan welcomes the Hon. W. R. Motherwell’s announcement that Garnet wheat has made good during the past season. ‘How much this single discovery has added to the wealth-producing power of Canada is a subject for speculation’, the Albertan, reminds us, adding: ‘The fruits of it will be gathered year after year for generations to come.’

The Calgary editor has no vision of the ‘settlers plunging next summer into the northern wilds because Garnet wheat has made it possible to grow wheat in higher altitudes’, but is content that farmers all over the wheat-growing section of the prairie provinces will, this coming summer, get the benefit of an earlier ripening crop, and, therefore, more freedom from the frost menace.

The discovery of Garnet wheat’s possibilities, in the opinion of the Toronto Globe, ‘is the more important at this time when the United States has almost ceased to be a wheat exporting country. Moreover the demand for natural products from the Far East has increased the purchasing power of some of the Eastern peoples and caused a larger use of Canadian wheat as food in the Orient. This should react on Canada as one of the few remaining large wheat areas of the world.’

'"THERE is yet another angle to the Garnet wheat discovery. There is the stimulus which the Garnet result is certain to give to experimenters. Garnet is not the last word of the experimenter in the production of early ripening wheat, as the Calgary Albertan points out. A year or so hence, no doubt, some new variety requiring still fewer days to mature will be announced. Only time and experience will show how much the period between seed-time and harvest can be ultimately shortened.

As a matter of fact, as the Toronto Star Weekly tells us: ‘Word has been received from Olds Agricultural College, Alberta, that Professor Grisdale, principal of the college, is experimenting with a new kind of wheat, which, if it does all that is

claimed for it, will mean millions of dollars to the farmers of the West, where the wheat season is short.’ Some of Professor Grisdale’s new wheat was planted in June of last year on a farm near Olds. It is reported to have matured even before the new Garnet wheat. The bundles were not permitted to be threshed out on the farm, but were carted to the college. Professor Grisdale, when interviewed, refused to talk, saying he was not ready yet. It is thought the reason for the delay is that the wheat is being treated as to its qualities for producing good flour.

What will be the reward of the wheat experimenters? The Calgary Albertan reminds us ‘that Canada has never been over generous with the men who have served the country in such ways as these.’ In some instances, it says, the treatment of them has been positively shabby, and for this reason it urges that ‘it is time to recognize that the laborer in the field of experimentation with plants and animals is worthy of his hire, and that when he succeeds, he enriches the country out of all proportion to any hire he is at all likely to get.’

In this connection, it is interesting to find that Manitoba is now rewarding one of the hardest working experimenters the prairie provinces has known, S. Larcombe, of Birtle, Man. Axminster, one of the new wheats that has added to the wealth of Western Canada, was developed by Mr. Larcombe, an Englishman who came to Canada about thirty years ago, since which time he has done wonderful work in raising the standard of wheat, other grains, grasses, and vegetables in Western Canada. He has just been appointed an agricultural advisor for the Province of Manitoba, a sound and business-like move on the provincial government’s part, it would seem.

Clearly the wheat experimenter who evolves a cereal which adds potentially to the harvest of the Dominion is worthy of substantial reward. It is impossible to measure the extent to which he creates new wealth within the country.

Who will question the economic importance of cereal evolution? Undeniably it is a factor in our national progress which extends from our very breakfast tables to the farthermost points reached by international commerce. 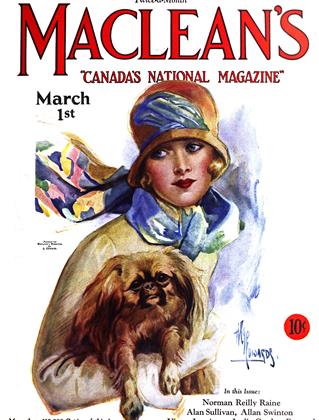