THE only reason that potatoes are not commonly regarded as one of the delicacies of the table is that, as is the case with so many other worthy things, familiarity has bred contempt. Also, be it added, that the most appetizing methods of cooking potatoes are not known to all cooks, by any means.

There are three ways of making potatoes exceedingly indigestible. One is by over-cooking, another is by letting them stand in water after they are cooked and the third and last, also the most prevalent, is frying them in any manner whatsoever. The cut starch cells absorb the fat and make the potatoes a harmful food. Children and people with#weak digestions should never eat fried potatoes.

excel. The potatoes may be boiled in their jackets, first clipping off a tiny end to prevent them from bursting open with the expansion of the starch cells, each potato taken from the pot after they are drained, dipped quickly in cold water and immediately peeled. They can easily be handled in this way and as the cold water only cools the surface for a moment, if they are immediately placed as peeled in a covered dish, they will be quite hot for serving. The potatoes, after being peeled, may be placed in a saucepan with a little butter, rolled about carefully over the fire, so as not to break them, and, when well-buttered, placed in a dish and sprinkled with chopped parsley.

When potatoes are peeled before boiling, they should be cooked well and cov-

ered with water to keep them white. Tl e water drained off them contains many valuable salts. Put the water in your stock pot if you can.

'T'HERE are numerous attractive ways of serving potatoes. The housewife will simplify her work if she will boil, in their jackets, enough potatoes for two dinners at the one time. The second lot may be made up into any of the following tasty dishes;—

Creamed Potatoes—Dice the cold potatoes or cut them in any manner. They may be made into tiny round balls with a potato scoop if you so desire. Make a cupful of milk into a rich white sauce with a tablespoon of flour blended with a dessert to a tablespoon of butter, cook until thick, and season. Have the sauce hot, drop in the potatoes just before required, heat, season well with salt, pepper and paprika.

Potatoes O’Brien—Cook two slices of onion in one and one-half teaspoons butter until light brown. Skim out-the onion, add to the butter three whole canned pimientos cut in shreds, keep warm. Cream two cupfuls of diced cooked potatoes in one or one and one half cupfuls of white sauce, and turn them into the pan containing the pimiento. Blend one minute, serve hot. Sprinkle with chopped parsley. Diced fried potatoes are sometimes used instead of creamed potatoes.

Potatoes au Gratin—Dice cold cooked potatoes. Grate two tablespoonfuls of cheese for every cupful of white sauce required. Season the sauce well with salt pepper and paprika, blend in the cheese and stir the seasoned sauce lightly into the potatoes. Place in a baking dish, sprinkle top with bread crumbs, dot over with butter, bake until top is brown. A cupful of stock instead of all white sauce is an improvement.

Potato Dumplings — Beat up some boiled potatoes while hot until they are smooth. Keep hot, add flour to one half quantity of potatoes, one beaten egg for every two cupfuls of the mixture, one tablespoonful of cream, one and one-half teaspoonfuls baking powder. Let cool, form into small balls, cook fifteen minutes in salted boiling water. Drain, and serve with meat gravy.

Anchovied Potatoes in Shells—Bake fairsized potatoes until done, remove thin slice from side, scoop out the inside of potato, mash well. Add two tablespoonfuls butter, twelve anchovies, cut in small pieces, one-eighth of a teaspoonful of nutmeg, one third of a cupful of rich hot milk. Refill shell with the mixture, heaping up in mound. Brown in oven.

Potato Salad—Dice cold boiled potatoes or slice them if you prefer. Any, or as many as you wish of the following ingredients, may be added to the diced potatoes: Parsley, one tablespoonful of minced onion, two tablespoonfuls of sliced

gherkins, minced olives, one hard boiled egg for each cupful of potato, sliced cucumbers, sliced tomatoes, canned lobster, or shrimps, or sardines. Season well, and use your favorite salad dressing. A sweet dressing is not advisable. Marinate the salad in the dressing and place on ice for a half hour before serving. If tomatoes and cucumber are used they may be added just before serving. Place an additional teaspoonful of dressing on top of each serving, garnish with chopped parsley, egg, beet root, pimiento and olives.

Potato Soup—Potato soup is a very appetizing dish for a cold day. Peel and slice three large raw potatoes, add one onion (sliced), one carrot (sliced), two sprigs of parsley. Cook barely covered with water until onion and potatoes are done. Lift out the parsley and carrot; press remainderthrougha collander. Blend together in a saucepan, one tablespoonful of butter, one half-tablespoonful of flour, add one and one half cupfuls rich milk, stir until thick as cream, add one quarter teaspoonful celery salt, one half teaspoonful salt, one quarter teaspoonful pepper. Blend the milk and potato together. Heat. Just before serving, add one tablespoonful of chopped parsley, four dashes of paprika, one teaspoonful of butter, and more salt and pepper if required.

Potato Puffs to Serve With Cold Meat— Bake the potatoes and remove from shells as described in recipe for anchovied potatoes. To the beaten up potato, add one teaspoonful of butter, one tablespoonful of cream, one half white of egg, salt and pepper to taste. Mix well, refill shells, sprinkle heaped top with grated cheese and return to oven to brown. Minced cold meat and a little of the accompanying gravy may be added to the potato, and the egg omitted, to make a luncheon dish.

On days when you are planning a camp fire supper, or a studio luncheon, or when unexpected luncheon or supper guests arrive, try the dish we have named ‘Vagabond Potatoes’.

Vagabond Potatoes—Cover a buttered flat baking-pan with a layer of white sauce, well seasoned. Sprinkle on this, one half-teaspoonful of grated onion, then place diced potatoes on top of the sauce. The sauce should not quite cover the potatoes. On top of the potatoes place rashers of bacon that previously have been lightly fried on one side to extract some of the fat; lay them on cooked side down. Now, either cover the top of the pan with thin slices of wellseasoned tomatoes, or, after the dish has thoroughly heated in a hot oven, break over the top as many eggs as desired, season, dot with butter, cover and return to oven. An attractive dish is made by using both tomatoes and the eggs. Place a ring of sliced tomatoes about the edge of the pan and eggs in the centre. Wrap a napkin about the sides of the pan it is cooked in, place on a platter or tray and send to the table. Serve with hot buttered toast. Vagabond potatoes, with cooked fruit of some description, toast, and coffee will make a complete luncheon or supper. Chopped parsley, or sprigs of parsley may be added by way of garnish to the dish if desired. 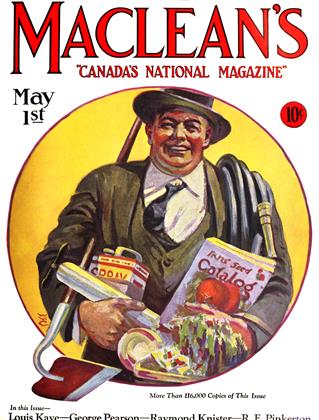