There is ample room for originality in the use of the new crystal, the new pottery and the new linens, which are as dainty as they are colorful

IN COMMON with dresses and hats, the table takes unto itself a special allure of color and daintiness in summer—sometimes, even, it swaggers in the equivalent of sports wear in heavy linens and hardy pottery and glassware. Such informality seems to go with the tinkle of ice in tall frosted glasses and the stimulating sight of crisp, cool foods on dishes as fresh in color and texture as sturdy July flowers. Gaiety is the keynote, and never has there been such opportunity for originality in the selection of table appointments, never such a colorful variety from which to choose.

AXTHEN it comes to tableware for summer use, there * * is little distinction between the special missions of glass, pottery and china. For instance, full dinner and luncheon sets now are to be had in the most refreshing shades of glass—green, yellow, rose and lavender—while many of the lemonade and iced tea sets, in their light wicker basket-trays, are of pottery. The glassware in full-course plates even has gone so far as to usurp the old province of flowered English china, for it now is being produced in Central Europe in the most colorful patterns. The glass is somewhat opaque and white with frosting, and on it are painted the high-keyed florals dear to the old English potteries—z i n n i a s and

gilliflowers, asters and marigolds. With linen of appropriate texture, unusual and extremely attractive effects can be secured with this china-like glass.

HPHEN there are the heavy pottery dishes from Italy. Cantagali and Majolica wares are to be had in great variety of design. The Cantagali is an all-over rich yellow, flowered in rather small and dainty motifs. Majolica, for the most part is a heavy cream, banded with raised garlands of flowers in colors rather more fulsome than brilliant, with quaint little knobs of handles and top-lifts of similarly colored pottery. Both are very old Italian wares—dating back to the heyday of the Italian Renaissance. A very remarkable 16th century exhibit, the Hamilton collection, recently on view at the Toronto Art Gallery, displayed examples of these wares, which apart from their venerable antecedents, were not more choice than the tableware now available at amazingly reasonable prices in the shops. The Italians are doing much to bring color into table decoration, and in the matter of linens, we shall further discuss their contribution.

Q PEAKING of the revival of old ^ wares, the reproductions of Waterford and Bristol glass offer much to the summertime table scheme. Of all

the beautiful tableware which has come down to us, the most heart-breakingly scarce is that of the great Georgian glass-cutters of England, Ireland and Scotland—those superb masters of an exquisite art. It is literally no exaggeration to say that no complete service of old Waterford, Dublin, Bristol or Glasgow still exists intact, while those which are yet in a fair state of preservation, are beyond the reach of either the collector or the lover of old beauty in the inaccessible fastnesses of the entailed British estate. On the other hand, those old pieces which one may acquire at considerable cost, are so valuable by reason of their rarity and potential fragility, that their

regular use in the home amounts almost to sacrilege. For these reasons we have much to be grateful for in the recent appearance of exceptionally interesting and authentic reproductions of the old British cut crystal.

The finest specimens of cut-glass belong to the period between 1780 and 1810. Owing to the sacrifice of form to prismatic brilliancy, cut glass gradually lost its artistic value, but it is out of the period of its highest periection that reproductions are now being made—a revival of types whose sturdy grace has not been equalled in a century.

Many of the old Georgian patterns of English glassware are being made so cleverly to-day that one is at a loss to detect the genuine from the reproduction, for, strangely enough, the old crystal bears no distinguishing mark. As a result, a perfect reproduction is almost as interesting as a genuine old piece, and if the purchase is made from a reputable dealer, the cost of even an entire suite of crystal reproduced from Georgian or early Victorian types, is so low as to permit its household use.

The old ‘coaching sets’, consisting of pitcher and heavy, barrel-like tumblers that make a gratifying handful, are suggestive of spicy brews that cheered tally-ho parties of a hundred years ago They make excellent summer sets, and are attractive for the dinner table at all times.

T^'HE perfect complement to the *• summer china and crystal, with all their color and originality, is linen. Of all the innovations which have come into household things, I know of nothing more charming than the surprises and varieties in the new adaptations of this fabric to table uses. From Italy and France, in particular, linen tablesets are being brought in varieties of texture and decoration. The prints are the newest as wen as the most attractive. The French linens have been developed to a great degree in motifs and colors intensely modern. For the most part these are bridge or tea sets in soft lawn, as malleable as a handkerchief. Cubism adapts itself most successfully to the area of a yardsquare cloth, it seems, as does any border of brilliant and bizarre color.

Refreshing and cheerful as these more advanced designs are, however, there is always a more conservative choice provided in the dainty appliques of white on pastel color in banding effects, most often of light blue, green, yellow, lavender and rose, with almost endless variations of arrangement.

In the Italian linens, the heavier material is more prominent, though in the prints, the lighter quality also is in evidence. Here the designs differ from the French, in their traditional character. It was Fortuny, the young Italian manufacturer, who first conceived the idea of utilizing the gorgeous damask motifs of the Renaissance on washable fabric. His experiments

evidently have influenced the makers of linen in their present adaptations of like inspiration. The modern Italian printed dinner and luncheon sets have the beauty and decorum of pure and symbolic design which enriched the fabrics of the Doges. Indeed, there is no doubt that much of this type of linen will find its way more and more into formal appointment, particularly as the popularity of the refectory type of table and inevitable use of runners persists. The heavy Italian laces also are

sisting of flowers and metal candlesticks.

In linens from all the continental weaving centres, the vogue for black and white has crept in, as elsewhere. It was somewhat of a shock when last year, the most frivolous of glove handkerchiefs appeared in a combination which we habitually had connected with mourning, but it has served to prepare us for the reception of black and white table linens. The extraordinary part is, that the black and white prints give the effect of being among the

to the fore among the new linens. These can hardly be called informal, although they are of sturdy enough habit to warrant use with pottery, pewter or copper in table decoration. Gorgeous runner sets of these are to be seen, usually, in two long stretchers, and two small squares. The runners are laid along the outside of the table, and are joined by the squares at either end. The island of wood left down the centre is an invitation to unusual ornamental arrangements con-

most light-hearted and cool of any which one sees. Most often the decorative pattern itself is white with an offset black background, but frequently wand-like tendrils and a lacey filigree is spread along a border with an effect of great refinement and distinction.

Verily the summer table is different this year from any which has gone before it. Glass replaces china, and linen as prismatically bizarre as a piece of modern batik cheers the meal hour! 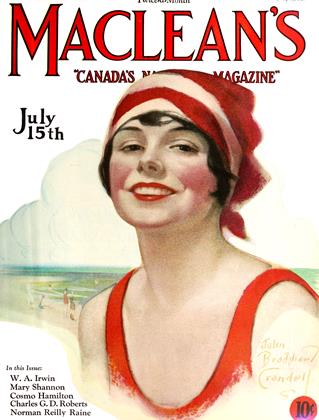