Why export our native woods and import substitutes?

THE subject of Canadian woods in interior finishing and furniture manufacture, is an intensely important as well as interesting one from the point of view of the builder or home-owner, and one on which more widespread knowledge would be of use. The Canadian woods, which are exported in such large quantities, number among them the most common media for exterior and interior finishing—yet a huge percentage of woods being used in Canadian building to-day, are imported. That oak, walnut, mahogany and chestnut should be among these is not surprising, but that woods so similar to our own should be so widely imported and substituted, seems economically a paradox.

Much of the situation, of course, is caused by the widespread advertising of American woods, and information circulated through American periodicals as to the scarcity of various species, which nevertheless are still plentiful in Canada.

Take the case of white pine and gum wood, for instance. White pine, large quantities of which are lumbered in Ontario and Quebec, each year is being shipped to other countries. Whether it is the Canadian manufacturer’s failure to advertise, or whether an impression has been created that it is scarce by the constant reference to the American shortage in United States publications, there seems to be a general feeling that a scarcity of this wood exists in Canada. Yet it is one of our finest and bestsupplied lumbers.

On the other hand, with a large variety of excellent soft woods plentiful in the Canadian market, an amazing amount of gum wood, a soft wood grown in the southwestern part of the United States, is imported and sold at prices equalling our best native hardwoods. One seldom inds this wood being used in good work in the United States, yet in Toronto alone, the use of gumwood has been actually doubled within the last year or so while builders make a point of advertising it in the finishing of their houses. It is a situation of which the public who builds and plans its homes should be cognizant, both for its personal protection and because of the importance of utilizing our own resources.

rT'HE general rule in erecting the skeleton work of a dwel ing is to supply beams of fir and joists of hemlock. A very excellent quality of hemlock is exported in large quantities from British Columbia, sometimes called western hemlock or silver fir.

It has more of the characteristics of fir without the hard orange yellow grain. Though bearing some resemblance to the imported yellow pine, it is a superior wood. This wood also has interior possibilities which will be mentioned later. It is used more than most of our Canadian woods. Outside woodwork is usually of spruce or white pine—both plentiful Canadian woods.

It is when one gets into the interior finishes, however, that the competition between our own fine soft and hard woods with imported material begins. The distinction between soft or hard wood exists in the original classification of the tree. As a rule, deciduous trees are hard; coniferous trees are soft.

Wh tewood is a fairly inexpensive imported soft wood and is very much used in modern interior woodwork. However, a Canadian wood which is very little heard of might be used in just as great quantities were it better known. Basswood is a soft, even-grained wood, as good and superior in some ways to whitewood. It takes excellent stain or enamel finish, being soft and without pitch or hard spots.

Birch, a Canadian hardwood, is particularly recommended for flooring, being durable and not so easily stained as oak, which is more open-grained, It takes a oeautiful stain or enamel finish, a^d, like maple, is used to imitate mahogany and walnut. In the opinion of leading architects, birch is a much neglected wood. It

has, among other recommendations, wide variation in color, and many prefer it to oak—which is imported.

Next to birch, for use as casings, doors and trims, is the Canadian brown ash. It is a fine native wood, and though exported in great quantities, is little used in Canada. It takes any finish suitable for oak, and really resembles it in grain and color.

Maple, the national tree, presents many possibilities. It is without doubt, one of the most beautiful furniture woods, yet Canadian manufacturers have almost en irely overlooked it. It is, however, being utilized quite extensively for ‘block flooring’. This is an English method of floor-laying, technically known as the ‘nonsetting mastic pitch’. Such floors are not affected by weather, do not become uneven, and have a ‘give’ which is not usually found in ordinary laying.

Again, in the interior woodwork, the Canadian white pine has no peer, being the ideal enamelling wood. Natural pine panelling merely oiled or waxed is now one of the smartest interior trims. Hard pines, Georgia, Southern and Norway with allied species, which are frequently imported, are all so fat with pitch, that they require all sorts of special handling in painting, and only an expert can secure good results with them.

To go back to the British Columbia hemlock, or fir, this is very charming indoors in a natural finish, treated only with a paste filler, It takes on a soft gray-brown, not unlike weathered Italian walnut, or very old white pine that has not been oiled or painted. It has been introduced in England where it has been used in the construction of a number of important buildings.

A New Furniture in Canadian Wood

YET with all his seeming lack of appreciation of Canadian words, it is out of Canadian pine that the only genuinely original furniture on the continent has h een created in the last few years. It is the work of one Ralph James, of Pocahontas, Alberta, who first discovered possibilities in the bulbous, misshapen limbs and trunks of pines growing in that neighborhood, which had been attacked by some arboreal disease.

The wood is honeycolored, smooth and polished against the weather, for it is used to a great extent as out-door furniture. In graceful, interlacing backs of garden seats, in letter boxes, scrolled pediments over doors of cottages, mushroomlike tables made from the solid trunks of trees, stools to go with them side tables, comfortable curve-armed fireside chairs, it is to be

found everywhere in the vicinity of the worker.

There is an almost uncanny effect of malleability in the fab.ication of this furniture—the heavy, solid wood almost seems to have been woven into curves and interlacings of design.

Although its chief setting has been Jasper Park, where it has been made a sort of feature of the place, and where it was first generally introduced and developed, yet interest in its unusual qualifications for garden and cottage use is drawing it across Canada from coast to coast. It seems to have found particular popularity in summer-house construction outside of its native heath, and the craftsman who has evolved this domestic creation out of nature’s freakish handiwork, is now called upon for examples of his craft the Dominion over.

AN AD I ANS have always been rather proud of their hunting lodge effects in summer homes near the lakes or in the woods, and truly enough, the unbarked timber used as woodwork in the informal summer interior, is attractive, With heavily-barked woods, however, the heat of indoors will usually cause the bark to lift and crumble, making it a cleaning problem and a nuisance in constantly catching on clothing.

Unbarked birch, however, being lighter and smoother, makes a most attractive interior trim. An accompanying photograph shows a stair rail used by Merrill Dennison at Bon Echo. Mr. Dennison has made a study of the building of log cabins and rustic structures, and has found birch eminently satisfactory for use wherever unfinished wood can be fitted into the general decorative scheme. 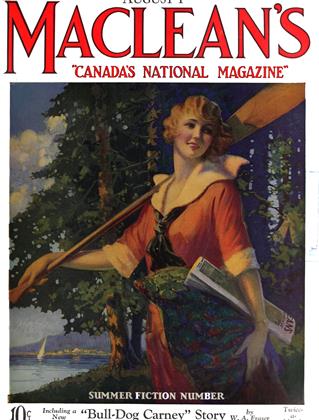