THE gayety of chintzes is as nothing beside the gayeties of embroidered, appliqued and painted or printed materials for decoration. Contrasts are so vivid and designs so utterly different and quaint, that at least one room in every recently decorated house ought to be an experiment in this new medium. The Ukrainian embroideries on heavy cream linen in red and black are to be found quite frequently. There are Ukrainian workers doing this most colorful embroidery right in Canada, if one can get in touch with them, though much of the same sort of work is being imported from Czecho-Slovakia at absurdly reasonable prices. Bedspreads, bureau-covers, towels and cushioncovers are among the made pieces which are available. From Alsace-Lorraine come the wonderfully colored printed and hand-blocked table-covers and cushions, at the unusually low prices which one seems to pay for French originality now. These are essentially the piece fabrics, made into their permanent form before they are printed, stencilled or painted. Curtains are curtains first, as are the other incidental pieces which billow out of the cupboards of smart decorating shops in all their ruddy color and fulsome design. The brilliant table covers from Alsace are often cut in two and used for bedroom curtains—indeed one even hears of their being used as beach shawls!

FOR all the reasonableness of printed and embroidered brifacs from abroad, however, it is more interesting and1 infinitely cheaper to make one’s own hangings and coverings if possible. One very easy method, and one which costs little or nothing as the cost of fabrics go, is to do a room in unbleached muslin, appliqued with motifs and borders cut from chintz. A room so decorated is illustrated on this page. It is necessary to select a figured material with bright colors, and an outstanding medallion in its design which will allow of cutting out along a welldefined outline. It is necessary to leave a little edge for turning under and basting. The appliqués are then pinned experimentally on the already finished bedspread or curtain, and when the best effect has been secured as to arrangement, basted down and applied with blanket stitch in some floss which is either an effective

contrast or good harmony. This is a finish in itself, and a strong appliqué.

PATCHWORK is another form of appliqué. It is a needlework as old as the hills, but one which also is being revived to a great extent in the present decorative trend. The patchwork, quilts of our grandmother’s day were veritable records of a life time in the memories stored in scraps of fabrics used. Modern patchwork need not be less expressive, if we set about designing or planning it with any mood in mind—and the many variations possible in this delightful handiwork, are an added inspiration.

Patchwork is in reality a very dignified and ancient form of needlework, although we habitually connect it with the quaint phases of household pastime of the last century. It was first born in the East, and came into use in Europe through the Crusaders, who introduced it to the ladies of the Court. Appliqué work soon appeared everywhere. Banners carried in battle were ornamented with patriotic emblems and historical symbols; wall and bed hangings bore historical scenes, landscapes, birds and flowers, while church embroideries were wonderful examples of the beauty of appliqué work Even court costumes were gorgeous with the elaborate

forms of patches executed in minute stitchery. And it is certain that many pieced quilts were made in the homes of the thrifty, even in those far-off days. The rare museum examples which exist show that no pattern was too intricate, no pains too great for the needleworker who really loved her craft. Most of these early forms of patchwork are still suitable for the home, an effective decoration for curtains, pillows, bed-coverings and wall hangings.

How to Plan Design

"UOR inspiration in making your own patterns—for -L it is the personal design that is worth while—make a study of the subject by reading books of reference on the subject in the library, studying the traditional designs there shown, and if possible, examining museum collections. When you feel that you are sufficiently au courant with the subject, then you may begin your own planning and designing.

Patchwork patterns are simple if you use paper ruled off in squares. vVhen appliqués for forms are not strictly geometric keep two things in mind; simplicity and practical shapes for sewing. When you have decided on your design and are ready to begin , your first necessity is a set of accurate cutting patterns. To make these, first trace each separate unit on thin paper and cut the tracing out accurately. Using this thin paper pattern, next cut a heavy cardboard pattern. Lay the cardboard on the material, trace round it with a lead pencil,

then cut the cloth out one-quarter inch outside the line. The allowance is for the seam on the turned-under side.

If you are making a quilt, in order that the individual blocks or sections may be uniform, it is desirable to make a pattern by which you can transfer the appliqué design to the background fabric. To make such a pattern, draw upon the paper outline of your square or oblong, and separate this into sections by drawing lines diagonally from corner to corner and from the centre of each side to a point directly opposite. You may also divide the sides of your square into thirds and draw the structural lines across from side to side. If properly drawn, all such lines will meet at the centre of the square, and you wrill have a frame upon which to build your working pattern.

With guide lines made cut from

paper the required number of sections (finished size) for an individual block or section and arrange them in the proper position In your pattern, using the plan for the finished work as a guide. Secure with pins and trace around with pencil. With flowers and leaves made, it is simple to draw in the stems, which are usually about a quarter of an inch wide. Remove the sections and straighten the outlines. This becomes the pattern by which you can transfer the design to the background fabric, using carbon paper for the purpose.

To plan a border group or spray, it is generally necessary only to find the exact centre of the space by folding the pattern lengthwise, then crosswise, and drawing guide lines accordingly. With the motifs placed, draw stem lines connecting them. Prepare one half the pattern in this way, fold and trace the other half from it so that the design will be balanced perfectly

A border usually is based upon a skeleton or frame of rectangular shape, the measurements depending upon the extreme width that you wish your border to be. First draw the outer lines indicating the length, draw a second rectangle the desired number of inches inside the first—indicating the inner line of the border—and connect the corners with diagonal lines. Divide the space between into equal parts and draw lines accordingly. Mark the exact centre of bottom and sides, and you are ready to arrange your patch pattern and plan your design in the manner already described. In other words, decide on the motifs you wish to use and then arrange them regularly on a skeleton of geometric lines. These lines will be sure to give an orderly result in your finished work, although they will, of course, disappear when the article is completed.

/CREWEL work for wall hangings, ^ East Indian embroidery, and printing is in the very fore-front of decorative specialties. Home-made appliqués may be made just as effective—or for that matter home-made embroidery. In England, the crude wool tapestries of the 17th century are being revived, and it is not difficult to reproduce these old embroideries, if a little imagination is used. They run to figures and scenes with little houses and trees, prominent sun and stars. Being made of wool they are filled up very quickly, and results do not depend entirely upon finesse of shading and workmanship.

How interesting and how true an heirloom would a wall hanging depicting some family event or period be! There is no limit to the personal note in such work, and though it may take a winter to finish properly—what a delightful and worthwhile possession such a piece would prove.

Samplers and framed wool-work pictures are also a most delightful handiwork and are being greatly revived at present. So, too, is needlepoint—cross-stitch and tapestry stitch—for chair-coverings, screens and panels. These are carried out in period designs, making a permanent and fitting refurbishing for fine old furniture. 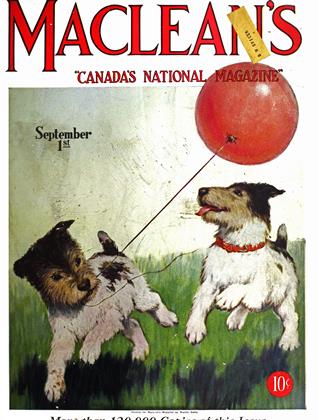