The Investor’s Survey of Canadian Industry A. W. BLUE September 15 1927

Hundreds of thousands of dollars ore lost annually in Canada through careless i investment. Fraudulent and worthless securities arc being constantly poured on to the mnrket to entrap the unwary. A general observance of this simple | maxim will assist in the reduction and elimination of this economic waste—

"BEFORE YOU INVEST—CONSULT YOUR BANKER.” !

MANY Canadian investors have enjoyed a profitable investment experience in that important group of industries engaged in the manufacture and distribution of food commodities of various kinds. Of late years a tendency has been in evidence toward centralization and consolidation in this particular field, and the balance sheets have almost invariably reflected the benefits arising out of the inherent advantage that a large scale enterprise, properly managed, has over the small, one-horse concern. Many widespread, comparatively unimportant operating units, have been eliminated as competing entities, to reappear as an integral part of .some large, strongly entrenched, dominant organization. Such a development in business has resulted in public financing of substantial volume, and to-day the public investment interest in the so-called ■foodstuffs’ industry is larger than ever before.

Engaged in the production of commodities, that in the main are primary essentials, these companies usually find ready markets for their output, mainly domestic, but the element of competition is always a factor. Although the movement toward concentration, as the larger units enjoying all the advantages of lower operating costs, increased purchasing power, etc. that large scale operations afford, consolidate their positions in their respective fields, it is becoming increasingly difficult, to successfully compete against them. The range of products covered is a broad one, including such items as the collection and distribution of fresh milk, the manufacture of butter and bread, to the more technical processes of meat packing and sugar refining.

A great many investors to-day can look back with satisfaction upon a speculative venture in such companies as the City Dairy Co., of Toronto, or the Canada Bread Co., operating in several of the more important cities of Central Canada. But the experience of the respective members of the ‘foodstuffs’ group has not been uniformly favorable. The packing industry has been acutely depressed for several years, largely because of erratic export markets, and packing companies which have been able to maintain profits during this period have been in the minority. There are many who recall with pain the collapse of the Atlantic Sugar Co. after the period of postwar inflation had completed its course. This company is still laboring under the handicaps imposed by that crisis, although once more established in a solid financial position.

TN THE realm of the baking industry the Canada Bread Co. occupies an outstanding position. There is a form of community interest between this com-

pany, and Canadian Bakeries, Limited, organized two years ago as a consolidation of a number of competing units in the larger cities of western Canada. Northern Bakeries came into being this year, as a strictly Canadian enterprise, absorbing operating units located in Toronto, Montreal, London and elsewhere, formerly under the domination of the great American firm, Continental Bakeries. The production of biscuits, both plain and fancy, is closely allied, and in this field, the Christie Brown Co., for many years privately controlled, but absorbed three or four years ago, by outside interests, is the outstanding operator. Canadian Canners, Limited, is strongly entrenched in the trade in canned fruits and vegetables, Controlling practically ninety per cent, of the business in Canada. British Columbia Fishing and Packing Co. and the Gosse Packing Co. are the leaders in salmon canning, and operate on the Pacific Coast. The milk distributors, City Dairy Co., Hamilton Dairies, Limited, and Eastern Dairies have a broad investment following.

One of the latest movements toward consolidation has resulted in the uniting of four important meat packing concerns, Harris Abattoir, Limited, Gunns, Limited Canadian Packing Co., and Wm. Davies Co. This merger is an outgrowth of the economic stress imposed upon the meat packing industry of the country arising out of over-production, and distressed markets abroad.

The financial structures of the leading members of the several groups engaged in the production of food products, are analyzed below:

Dividends on preferred are cumulative and are paid regularly at the rate of seven per cent per annum. Preferred dividend was passed June 30, 1916, and resumed July 1, 1919, Tpi per cent, on arrears was paid in 1920, and per cent, in 1921. The rate has been maintained regularly since. The common pays dividends of three dollars per annum, and a bonus of one dollar per share was distributed January, 1927.

This company is a conservatively managed concern, and has been established in an exceptionally strong position. The distribution of milk in the city of Toronto is its primary business, but its operations include as well the manufacture and sale of butter, ice cream, powdered milk, etc. It controls the Dri-Milk Co., incorporated in 1920, a prosperous enterprise. The annual report for the fiscal year ended December 31, 1926, disclosed current assets, of $1,465.900 (including investments, the interest on which fully provides for preferred dividendsiand current liabilities, $279,668. Earnings per

Dividends are payable at the rate of seven per cent, on both classes of preferred, and the rate on common was recently raised to six dollars per annum.

A soundly financed and well managed concern, the Canada Bread Co. has made tremendous progress in recent years, and from an investment standpoint its securities have attained a high standing. The company is engaged in the production of an essential commodity, and operates plants in the cities of Toronto, Montreal, Hamilton, London, Winnipeg and Ottawa The Maple Leaf Milling has a heavy investment in the common stock of this company. For the fiscal year ending June 30, 1927, earnings available for common were equivalent to $13.33 per share as compared with $13.08 in the previous period.

The second preferred is convertible into Class B stock, and the Class B is issued only for conversion of the second preferred, on the basis of two shares of Class B for one share preferred. Dividends are being paid regularly on both classes of preferred at the rate of seven per cent, per annum.

This company is controlled by the Maple Leaf Milling Co., and operates bakeries in the leading cities of Western Canada. Its equipment comprises five bakeries, with a capacity of about 1,500,000 loaves of bread per week. The company was organized in 1925 to merge the five operating units of which it is at present composed. Its senior issues have attained investment status, and the common stock has speculative possibilities for a hold. The profit and loss account for the year ending August 31 last showed net earnings after depreciation of $281,927, and a surplus, after interest, taxes, and preferred dividends of $32,772. Current assets of $529,418 compared with current liabilities of $174,659, thus leaving the company in a healthy working position.

Preferred shares may be redeemed 115 on sixty days notice, and are convertible at any time at shareholder’s option into three common shares. Dividends are being paid at the rate of seven per cent, per annum on preferred and thirty cents quarterly on common.

The company operates a cake and biscuit bakery, with head office in Toronto. The present company was formed in 1925 to acquire a private business that was established seventy-five years ago. Important progress has been made since reorganization. Earnings last year were at the rate of 27.88 per cent, on preferred, and $1.99 on common. A surplus of $89,590 was carried forward from the year’s

This company is the largest canning firm in the British Empire, and controls the bulk of the trade in Canada. It manufactures a widely diversified list of products in the canning line, and its business is steadily growing. The high prices commanded by its securities in the investment markets, reflect the confidence of the public in the future of the company. , Earnings last year were equiyalent to 5.91 per cent, on preferred after a liberal write-off for depreciation. Preferred arrears aggregate well over twenty per cent., and the market is anticipating some form of major operation which will eliminate these arrears, which will not materialize, however, until earnings warrant. Working capital, at the close of the last fiscal year stood at $3,481,628 as against $2,861,734 at the close of the previous period.

Of the preferred stock outstanding $2,100,000 was issued in February of this year. Dividends at the rate of seven per cent, are being paid regularly.

The company operates a meat packing and retail distributing organization in western Canada, and has been able to operate profitably this past few years when other packing companies in Canada have found the going difficult. The average annual earnings for the last five and a half years ending December 31 last amounted to $692,544. Earnings for the year 1925 amounted to $718,202, and for 1926, $759,338.

This company has an authorized and outstanding issue of 400,000 shares of capital stock, of no par value, on which dividends of three dollars per annum are regularly paid. This issue constitutes the only capital obligation of the company.

The Shredded Wheat Company controls several subsidiaries, as follows: The Canadian Shredded Wheat Co., with plant at Niagara Falls, Ont. The Shredded Wheat Co., Ltd., with plant at Wellwyn, Garden City, Herts, England, and Pacific Coast Shredded Wheat Co., Oakland, California. The plant of the parent company is located at Niagara Falls, New York. Although a State of New York incorporation there is a large Canadian investment interest in the company. The company is in a sound position, and its business is constantly expanding. Its securities are held in high investment favor. Net income last year amounted to $1,468,907 as against dividend requirements of $1,150,000. The working capital of the company amounts to $3,499,391. The profit and loss balance stands at $1,570,223.

THE following is a representative list of standard investment issues, embracing the major groups, provincial, municipal, and corporation bonds and stocks, with yields at current market prices: 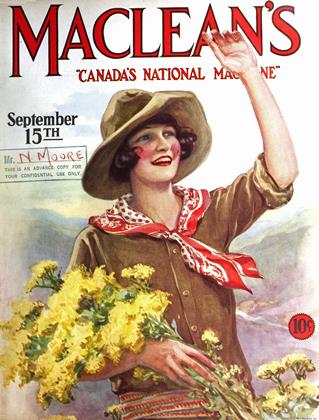