WHEN the wealth of summer vegetables J disappears, the homemaker finds it diffi cult to supply the daily tab1e with the necessary health-giving vegetables, and still avoid a sameness of fare which puts rather a strain on the popularity of such things as roots and canned vegetables. Ways that are a little unusual come as a boon when one is working with the more limited winter supplies. Of course, if it is possible to take advantage of the wide variety of vegetables which the commercial canner is putting on the market, you will find them a boon. They include asparagus, Brussels sprouts, golden and green string beans, baby beets and so on-not to men tion the peas, corn and potatoes of long and constant use! Also tiny carrots, the Chinese specialties such as bamboo sprouts, and lima beans.

APPEARANCE as well as flavor will help to “put over” some of the rather homely vegetables; we need the carrots, turnips, parsnips, beets and onions for their variety, for the vitamins that are stored in them, and for their economy. When bought by the basket or by the sack, these humbler vegetables are very cheap in most places. A nice arrangement, therefore—the touch of a colored garnish or the coupling of vegetables whose colors contrast pleasantly—is attractive to the eye. There are simple little cutters on the market, too, to help to give a different and pleasing appearance; potatoes and turnips can be turned out in the shape of little balls, or in lattice form, or given interest by various French cutters will look quite new and intriguing.

Carrots can be cut in matchlike strips or sliced as thin as paper—and they will actually taste very different when cut this way.

Try steaming many of the vegetables, to preserve their flavor. Bake some of them in the oven when possible.

Other vegetables besides the Franconia potatoes will be given a most savory piquancy by finishing their cooking in the roasting-pan with the joint—parboiled parsnips or carrots, diced turnip, sweet potatoes, are all excellent, treated this way.

Vegetables served creamed, escalloped, braised, au gratin, as a ragoût, a soufflé or a macedoine; vegetables baked, plain or stuffed or served with a variety of the commoner sauces—such as cream sauce, drawn butter, cheese and egg sauce—or even one of the more "Ritzy” variety, Bechamel, Béarnaise and so on—these are some of the methods which serve to add a tang of variety to the otherwise monotonous legume.

Canned or fresh spinach may be used. Drain the former; if fresh, wash thoroughly and steam until tender, then drain. Chop either kind of spinach very fine, season well with salt and pepper and pack tightly into small individual moulds. Set these in a steamer, cover closely and heat thoroughly. Unmould carefully on serving, placing slice of hard cooked egg on each. A dish of melted butter or a sauce may be passed around, or the spinach may be served plain.

For a luncheon dish, add either a nourishing sauce or some strips of crisp broiled or fried bacon.

Prepare spinach as above, chopping it very fine and seasoning with pepper and salt. For each cupful of spinach, allow one tablespoonful of milk, one tablespoonful of butter and one egg. Beat the egg yolks slightly, combine them with the milk and butter and mix with the spinach. Beat the egg whites very stiff and fold into the mixture, afterwards turning them into buttered moulds. Place them in the steamer—covering the top of the moulds with a greased paper—or put them in the oven in a dish containing some hot water. Cook until firm. Unmould, garnish each timbale with a slicejjf hard cooked egg and serve with cheese sauce or egg sauce. Served thus spinach undergoes a complete change.

Beat the egg yolks and stir the hot sauce into them. Add the chopped vegetable. Allow the mixture to cool. Fold the stiffly beaten egg whites into the cold mixture and turn lightly into a buttered baking dish. Set up pan containing some hot water and bake in a moderate oven for twenty to twenty-five minutes, or until firm.

Other combinations may be worked out, such as creamed cauliflower, mashed squash or turnip, green peas or creamed parsnips.

Each vegetable should be steamed or boiled separately, all to be ready at the right time. The mashed potatoes are seasoned, beaten lightly with some butter and, if not too soft, a little cream or milk; shape as cones, roll in fine cracker crumbs, dip in slightly beaten egg diluted with a little cold water, coat again with the crumbs—which should be seasoned with salt and pepper—and fry in deep hot fat, 375 deg. Fahr.

Place a potato cone in the centre of each plate, if arranging for individual serving; place around it a pile of the carrot straws, another of diced beets, and so on; garnish with parsley and serve very hot. If arranging on a platter, put a row of potato cones down the centre, pile one vegetable at each end and one on each side. When serving, arrange as suggested for the individual plate.

So many vegetables can be served in a cream sauce that every cook should be able to make a smooth sauce of varying richness, with the maximum of speed and the minimum of trouble. For dressing vegetables, a sauce of medium thickness is preferred.

Melt the butter in a saucepan; remove from the heat and blend in the flour and seasonings very thoroughly; return to heat and gradually add the milk, stirring constantly. Continue the stirring until the sauce thickens smoothly, then set it over another pan containing boiling water, until no starchy taste remains, or as long as it is necessary to keep the sauce hot.

Make a cream sauce, as just given, and add to it two chopped, hard-cooked eggs; or rub the hard-cooked yolks through a sieve and chop the whites.

Quite a different type of egg sauce and one which is deliciously rich and smooth, is made by beating one or two raw egg yolks, slowly stirring a little of the hot cream sauce into the egg then returning it to the rest of the mixture. The egg is always added to this kind of sauce immediately before it is used, to prevent curdling.

Make the cream sauce as instructed above and add to it from quarter to half a cupful of grated cheese and, if desired, a little paprika or a few grains cayenne.

Many vegetables may be deliciously cooked in this way—a method which commends itself, also, because most of the preparation can be put out of the way early, and the vegetable prepared and

left in a baking dish, ready to pop into the oven for fifteen or twenty minutes before serving. Cauliflower, cabbage, celery, onions, greens and potatoes, are all particularly good prepared this way.

Make the cream sauce as directed. Steam or otherwise cook the vegetable— or use left-over vegetables in this way, combining two that will go well together, if desired. Butter a baking dish and fill it with alternate layers of the cooked vegetable and cream sauce. Cover the top with dry breadcrumbs that have been tossed in melted butter. Cook in a moderate oven until well heated and the top of the vegetable is a delicate brown.

Much the same group that I have recommended for scalloping are very appetizing when served this way.

Make the cheese sauce as directed. Cook the vegetables as usual; butter a baking dish; arrange alternate layers of cooked vegetables and cheese sauce; cover the surface with a generous layer of grated cheese dusted with a very little cayenne or with some paprika. Bake in a moderate oven until the top of the vegetable is a golden brown.

Mashed potatoes, squash, or sweet potatoes, may be served with the cheese but without sauce. Rice or mash the cooked vegetable and beat very lightly with pepper and salt, butter and a little cream or rich milk. Turn into a buttered baking dish and cover with a good layer of grated cheese sprinkled with paprika. Bake to a golden brown.

Break open the squash, scrape out the stringy pulp and seeds from the centre and cut in squares of serving size. Brush each piece with melted butter, sprinkle with salt and pepper. Set in a baking dish in a moderate oven and bake until partially tender; then spread with grated cheese mixed with a little fine, dried cracker or breadcrumbs. Dust lightly with paprika if desired. Return to the oven and bake until quite soft and the surface golden brown.

Another delicious way to treat these squares of squash is to spread them, when almost cooked, with a good layer of brown sugar dotted with little pieces of butter.

Most people are familiar with the handiest of all methods of cooking squash— using its own shell as a baking dish; the seeds and stringy pulp may be left in until the squash is tender, then scraped off the surface, which is dressed with melted butter, pepper and salt; or the seeds may be removed first, the surface brushed with butter and seasoned and the squash baked in the same moderate oven.

Melt butter—or bacon dripping which may be substituted and will give an excellent flavor—in the frying-pan and toss in the chopped onion, pepper and parsley. Fry until nicely colored. Blend in the flour and seasonings, then slowly add the water, stirring constantly. Continue to stir until sauce thickens smoothly. Add the drained sprouts and when thoroughly heated, turn into a hot dish and garnish with points of toast that have been buttered or triangles of bread browned by sautéing lightly in bacon dripping.

Like ordinary white potatoes, sweet potatoes are delicious on the “half shell.” Large round potatoes should be selected, well-scrubbed and baked in a hot oven, 450 deg. Fahr., until they are soft when squeezed. Cut in half, scoop out and mash, and to each cupful of mashed potato add a tablespoonful of butter, salt and pepper to taste and a little milk or cream; beat the mixture until very light. If desired, a beaten egg may be folded into it. Fill the skins with the mixture, rounding the tops nicely, and bake in a hot oven.

White or sweet potatoes may be sprinkled with grated cheese before browning.

The sweet potatoes take very kindly to the addition of a few spoonfuls of drained, fresh pineapple to the mixture —omitting the milk. Seeded raisins or chopped and toasted nutmeats are occasionally added.

The southern style sweet potatoes are particularly delicious. A few broken pecan meats and a little dash of powdered cinnamon are added with the other ingredients to the mashed, baked potatoes; the mixture is put back into the shells and one or two marshmallows pressed well into the surface. If the marshmallow browns before the potato would be well heated, cover the top with a paper. This mixture may be put into a buttered baking dish instead of into the half shells. 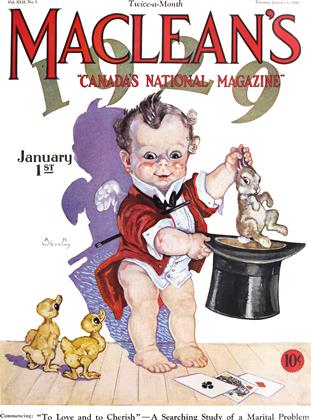