Click to View Article Pages
A “Dug-Out” in the Cellar

WHEN young Bill becomes bored with Dad’s reminiscences or mother’s household problems, he looks about for some place where he can be free from mental and physical friction and can feel fairly sure of no unwelcome intruders. Such privacy is seldom possible for the growing boy in the average home, and, all too often, in an effort to secure it he “seeks peace in the heart of tumult,” with results that sometimes are undesirable.

This desire for privacy does not necessarily mean that the younger generation is less loyal to its elders than formerly, but rather that the youth of to-day declines to bear the burden of boredom.

The present mature generation is making a valiant effort to understand the youthful generation. A practical demonstration of such effort is the room illustrated on this page, which was once a cellar store-room and was transformed into its present comfortable condition to provide a place of refuge for the son of the house.

The mother of this lad recognized the fact that privacy is something that young people need and feel the lack of more than adults, and her effort to supply a longed-for sanctuary for her son has proved highly satisfactory.

When the room was planned, the boy had left home for a month’s trip and the work of preparing it for him was accomplished in this short space of time.

Unlike most cellar rooms this one is reached from the front hallway. To make this possible, a doorway was cut at the back of the hall. Beyond this was a long, dark and rather unnecessary pantry which was abolished and the space taken to provide headway and room for a spiral stairway to the cellar. This use of the pantry space has proved to be a most desirable arrangement for the kitchen as well as the cellar, for the new cupboards which have been built in the kitchen to house the china and provisions formerly stored in the pantry, are very decorative and much more easy of access than were the shelves in the old pantry.

The landing at the bottom of the new stairs had been formerly occupied by coal-bins, but after the installation of an oil furnace some years ago, these had sunk into “innocuous desuetude,” and the space occupied by them made possible a roomy entrance to the “Sanctuary.”

Through the foresight of the boy’s mother who designed and superintended the entire project, the large pieces of furniture for the new room were dropped into the cellar through the opening made for the doorway before the staircase was installed. This room is likely to be the permanent home of some of these pieces for, like the picture described in the “Vicar of Wakefield,” there is not sufficient space in any of the points of egress to permit them to be taken to pastures new.

In order to heat the room from the furnace it would have been necessary to place a radiator in the ceiling, and as this was not desirable from any standpoint, an electric grate was installed which would give the heat required and also add to the attractiveness of the room. This method of heating has been found most economical, as it is brought into requisition only when the room is occupied.

By the use of beaver boards, a simulated fireplace was built, to which was added a mantel purchased from a wrecking company for $3 and stained to accord with the furniture. The breast of the mantel was covered with copper which was hammered and “antiqued.” A small

space on the floor in front of the grate was marked off by a lath, and this was painted terra cotta color to give the illusion of a brick hearth. When the electric coals are glowing, the general effect leaves little to be desired.

As the tiny cellar windows admit little daylight, color has been used to give the idea of sunshine. The walls and ceiling are painted a pale buff shade, and a wooden floor which had been built over the cement is resplendent in pumpkin color with a band of black about two inches wide forming a border. Two jute rugs of modernistic design in black and nasturtium shades show up splendidly against this yellow background.

The chesterfield was allied to the color scheme by its new dress of chintz which reflects the rug shades. A bright spot of color is also afforded by the costume of the young lady who sits so airily on the sofa and is always smiling and silent.

Space for books is generously provided for by built-in book-shelves on either side of the fireplace, and the proximity of the sofa suggests a comfortable place to read or study.

The brief little window curtains of rose and pumpkincolored net, carry on the color scheme and give a cheery glow to the room in the daytime.

As the room is seldom occupied except in the evening, great care has been taken to make the electric lights effective and decorative. In addition to the ceiling lights there is a handsome floor lamp which flanks a comfortable chair, neither of which came within reach of our camera. The upper lights were placed close to the ceiling so that they would not emphasize the lack of height in the room. The shades for all the lights are of inexpensive imitation parchment in harmonizing colors.

A disfiguring object in the room was a gas-meter, but this is most effectively hidden by a cupboard which has been built over it, and which not only conceals it completely when closed, but also furnishes space for the display of a few bits of brass and copper and the odd cup and saucer.

A second-hand desk was the only piece of furniture purchased for the room. All the other pieces had seen service in some part of the house, but all had been stained, painted or re-covered to suit their new environment. The desk, which unfortunately was not within the focus of the camera, is of oak with a flat top and liberal drawer space. It was in excellent condition and well worth the purchase price of $10. Like the mantel and cupboard it was rubbed down and stained.

An old coal-scuttle was brought into requisition as a wastepaper receptacle, and after it was painted in a geometric design in black, silver and pumpkin colors, it became a valued companion piece to the modernistic rugs. A coal-scuttle makes an excellent “W.P.B.,” as its yawning top makes it an easy mark for apple cores and the like.

It seems to me that the boy for whom this room has been prepared is extremely fortunate, for within it everything has been provided for his comfort at work or at play. If he wishes to study, the desk and book-shelves offer every inducement for work; if he is tired, the deep and comfortable couch suggests rest; and if he wants entertainment, the radio is ready to supply it. This boy’s mother is of opinion that what a boy wants is a place that is sturdily masculine and comfortable, and this she has most admirably provided. A boy doesn’t want to be bothered with fussy curtains or much bric-a-brac. He wants a room in which a baseball bat will not be out of place if it is in plain sight. Another important item is that a boy likes color.

I described this room not long ago to a lady who lives in the country, and she is now busily engaged in fitting up a “dugout” in the cellar for her son. She is not able either financially or otherwise to provide an electric grate for heating purposes, so she is installing a stove of open-front variety. On the floor she plans to put oilcloth which will have two coats of paint in a light color, and she is painting odds and ends of furniture to make a happy ensemble. As there is no couch available for the boy, a cot-bed covered with a Navajo rug will make a good substitute.

When a family lives in an apartment, it is not so easy to provide a sanctuary for sonny. In this case it might be advisable to convert the boy’s bedroom into a studio. A cot or day-bed would “fill the bill” here also, and would offer itself for gay covering and pillow grouping. A settle is also a good piece for a room of this kind, especially one with an adjustable top. In converting a bedroom into a studio room, it is a good idea to divorce the mirror from the bureau. A chest of drawers does not necessarily suggest a bedroom unless it is closely associated with a mirror. When the mirror is detached it can be hung at another point in the room where it will be equally effective and useful.

If an apartment has a sleeping porch, it offers a happy solution to the difficulty of providing the boy of the house with a special room of his own, because then his bedroom can be easily metamorphosed into a sanctum sanctorum.

If funds are not sufficient to purchase new furniture for the boy’s special room, good results can be achieved by refinishing old pieces, particularly if they have good lines. Boys will take a pride in painting or polishing furniture if it is to be their personal possession. A man who is now an authority on interior decoration, told me that when he was a boy, the pieces of furniture that could not possibly be used for any other part of the house were relegated to his room. He had to suffer the squeaky bed, the sagging springs, the lumpy mattress, the onearmed chair and the disreputable rug. He said that his greatest ambition was to get away from home and have a place to live where the furniture was comfortable and attractive. One can understand the revolt of this particular youth against uncomfortable conditions.

The lucky young owner of the room illustrated says that its only drawback is that it promises to be too popular. He has discovered that the other members of the family sneak into it when they think that he is not at home. This may account for the notice which I found on the door when I called to take the photograph— “NO VISITORS!” 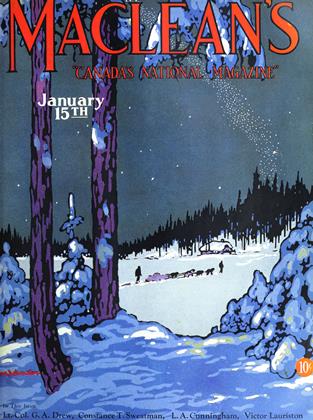