A House With a Past MARY AGNES PEASE October 1 1929

THE settlers in Canada in the early life of this country must have given much time and effort to the building of their houses, for some of these old dwellings are still in use in practically the same condition in which they were built. The house illustrated is a case in point. It was erected about a hundred and fifty years ago, and, although almost unchanged in its general appearance, is still a haven of happy refuge for its present owners, who use it as a summer residence.

Throughout its history, this house and the surrounding acres of land have been linked with the name of an Englishman who served with the Navy and later came to Canada to engage in shipbuilding. He was granted by the Crown some two hundred acres of land on the shores of Lake Simcoe, Ontario, and here he erected the cottage pictured.

It was built of logs hewn from the trees on his property, and these have stood the rigors of time and climate for a century and a half. The entire building was constructed without the use of nails, the timbers being fitted together, and the floors laid with wooden pegs. These old floors were used until a few years ago, when their worn condition suggested that they be made the background of a more modern type of flooring.

History does not tell whether or not Captain Mossington, personally built his house, but that he designed it is evidenced by the living room which, as the illustration shows, abounds in lockers suggestive of a ship’s cabin. These lockers or cupboards are five feet deep, and are sufficiently spacious to hold quantities of firewood, bedding, and all the domestic paraphernalia that housewives like to stow away. I am told that they were also used by the children for games of hide and seek. They even suggest a hiding-place for a grown-up, if occasion warranted a sudden brief disappearance-

The cottage is set on a lawn of wide greenness and is hidden away from the main road, which latter condition may have preserved it from the usual civic desire to modernize. Happily the cottage fell into the hands of those to whom its tradition and charm had a strong appeal, and they decided to let well alone where possible—to add only what was absolutely necessary. As a consequence the little house has all the simplicity of a pioneer’s dwelling, and brings to mind the days when houses were built in the forest, and when all the needs of living were obtained from the land.

Many trees were doubtless felled to make the house, and also to make room for it in this lovely sheltered spot near the lake; but many were left, and these still stand in friendly groups to provide light and shade and fruit. They seem to hold their branches protectingly over the old cottage.

One wonders how Captain Mossington came to this place—if he rode from the seacoast on a tall horse with his wife perched behind him on a pillion, followed by packhorses bearing the household goods and chattels; or if he and his family travelled in a covered waggon. It must have been a lonely place for a woman in those days, particularly in the long winter months.

ALL the cooking in that time was done ■L*in the fireplaces, and in consequence much care was given to their construction. This particular one is the admiration and despair of all the masons in the countryside, who have visited it in the hope that they will be able to find the secret of its unusual drawing power. It has none of the bad habits of the ordinary fireplace, for it devotes itself to devouring fuel and supplying heat, and scorns to send smoke anywhere but up the chimney. It does not require much effort to imagine the Mossington family in front of this cavernous old fireplace, watching with interest a smoking-hot supper being prepared for their delectation in vessels hung from the pothooks suspended from the hand-forged lazy bar shown in the photograph.

Formerly, the low-ceiled raftered room was more spacious, but the exigencies of present-day requirements made necessary a few partitions for bedrooms. In its initial stage the cottage had only one large room downstairs. It was a “living” room in the strict meaning of the word, for here the entire life of the family was carried on. It was at once the kitchen, dining room, bedroom and parlor. The upstairs part was also one room and without windows. It was known as the “smokeroom,” and in it the meat for the winter was hung from the rafters.

The new owners turned the old smokeroom into two bedrooms, and added dormer windows, as the illustration shows. These windows fit perfectly in scale and character into the old cottage and add to its charm within and without. In these two quaint upper rooms a very tall person finds it practically impossible to stand upright, save where the slope of the rooms runs up to the peak of the roof, or is broken by the dormer windows.

Under the house there is also a small stone-built cellar, reached by a trapdoor in the living-room floor. This was evidently the summer storehouse. The old stairway leading down to it has crumbled away, but otherwise it is unchanged.

A small kitchen wing was in the course of years added to the cottage, and a piece of it shows at the left of the picture. The present owners added modern comfort also in water pipes and electric wiring. These innovations have been so discreetly introduced, however, that the feeling of the past has not been disturbed by them.

As may be imagined, there are many stories told of the hardships experienced by this intrepid sailor and his family. In addition to battling with the forces of Nature in this lone spot, they had an occasional brush with hostile Indians. Possibly the little cellar or the lockers were used as hide-outs by the feminine portion of the family, while the stalwart male portion fought off the marauders.

The two hundred acres of land which lay behind the cottage were long ago divided into small holdings. Through part of the property a main road runs to the city, and on each side of this road are many modern dwellings large and small. Only the little house remains as a symbol of a time in this country when man went “conquering, holding, daring, venturing as he travelled the unknown ways.”

rT'HIS old cottage with its charming garden, in which the floral procession from daffodils to Michaelmas daisies marks the months as accurately as the sundial does the hours, was found so enchanting by a visitor from the United States that he has built a little cabin of logs ia a small clearing which he purchased in the woods of Vermont. This, like the cottage which inspired it, was built without benefit of architect. He personally cut the logs from the forest, “debarked” them and treated them to a somewhat lengthy sun-tan. He filled the crevices between his logs with cement instead of clay, but in every other respect he fulfilled the idea of age in making his cabin, sometimes becoming almost fanatical in his endeavor to give it the appearance of antiquity. He has been very successful with the fireplace and chimney, the latter following most minutely the description given to him of the first chimney on the Mossington cottage. Wide boards cover the floor, and wide slabs separate the rooms in his little cabin. Wooden pegs and slabs are also used as supports for clothing, and much of the furniture is built of the rough wood. The interior of the cabin is as quaint as the exterior, for the young owner has considered every bit of furniture brought to it from the standpoint of pioneer days. Rag carpets, slat-back chairs, quaint old curtains which hang on rods cut from tree boughs, tables made of split logs, and other old-fashioned products add to the picturesque and antique character of the whole place. In fact, it is difficult to realize that the cabin is entirely new, so faithfully has it simulated the appearance of age, in form as well as in spirit. I am told that this cabin really cost “next-to-nothing” from the standpoint of dollars and cents, and that the labor involved was looked upon as an investment in health and strength. The main expense was time, and this was most happily spent.

A house for the woods should be made of the woods, and to obtain one requires no high ambition or fat pocketbook. Given a model such as the one pictured, one should find it fairly easy, with the assistance of even unskilled labor, to build a little loghouse that will be satisfying in appearance and structure, and at the same time be a reminder of the primitive dwellings of early Canadian days. Some of the wealthy city folk have built loghouses among the trees in the Laurentians for their summer homes. These are, however, much more sophisticated, more rounded and polished than the one described. It is possible, of course, to copy the cottage illustrated, or others like it, in every detail, but the original will always have two qualities that the copies cannot duplicate—history and romance, and will reflect the simple sincerity of the people who made it so long ago. 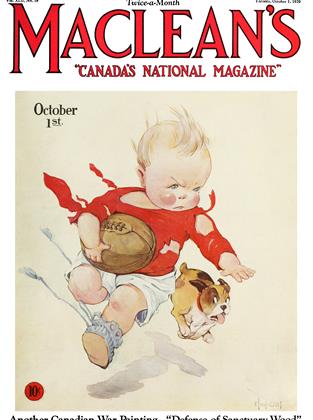