IT STANDS a little way back from the street and peeps at you from behind screens of flowering shrubs and the leafy boughs of trees. It is so demure that you would never guess that in its inner arrangement and use it is probably unique on this continent. Nor would you suppose that its six rooms could comfortably contain, or that its owner could easily maintain, a family which seldom numbers less than twenty-five.

As you enter the house you realize that there are many musical members in this family, for you are greeted with trills and long, clear notes of perfect melody. Presently these sounds are lost in a deeper, less musical sound which is a bit ominous and bears no suggestion of welcome.

This house which most perfectly expresses the personality of its owner, belongs to Miss Marshall Saunders, who has been called one of the world’s protectors because all her life by both written and spoken word she has been a passionate advocate of humane treatment for animals and birds.

Miss Saunders’ house was built on the plan of a bungalow in which she and her sister lived for a time in Berkeley, Calif ornia. To accommodate the large family referred to, however, it was necessary to add to this plan and provide an upper story which consists of two rooms. A large one across the front of the house is used by Miss Saunders as a study and work-room, and the other is a sun room in which most of the “family” live in the summertime.

On the lower floor of the house is the spacious living-dining room pictured, two small bedrooms with bathroom between and a large kitchen.

In every room, windows are so arranged as to provide cross currents of air and abundant sunshine. The front door opens directly into the living room, but as the photograph shows, a settle has been so adroitly placed that a sort of narrow hallway is provided. This makes possible a measure of privacy when an unexpected or undesirable caller appears, as in such case, the settle is sufficiently tall to hide the room.

"VJ OU will notice that the sofa is occupied by the member of the family referred to whose deep voice did not suggest a welcome. Fiji’s day is pretty thoroughly occupied with selfimposed sentry duty. She insisted on being in the picture but failed to understand the admonition “don’t move,” and in consequence the picture does not do her justice.

Further members of the family are met in the sun room where introductions are acknowledged with twitters and interrogative notes. Here is Suki, a Jacobin pigeon of very aristocratic lineage,

Milly, another pigeon of low degree who was a foundling, and a number of Bullfinches, Greenfinches, Java sparrows, Japanese robins, dark green canaries, and yellow canaries. One of the windows to the right of the sun room opens on a flight-cage which, is attached to the side of the house as is revealed in the picture of the garden, and this connects the sun room with the basement.

This cage is made of strong wire mesh supported by wood. Boughs of trees are placed across it at intervals so that the feathered inhabitants will find oases of rest in their long upward or downward trip. This secret passage “from cellar to garret” was planned by Miss Saunders, and is a most ingenious contrivance very much appreciated by the bird family. Back and forth up and down, roam the birds in complete freedom, but protected from marauding cats and other enemies.

The decorating of the sun room is ¡very simple but seems to delight its bird occupants. Foliage-green and sunshine-yellow are the principal colors employed. The floor covering is a mixture of sand and gravel in natural shades. The furniture is very up-to-date, for it is built on straight lines and is, for the most part, without

ornamentation. Artistic foliage-effects add a realistic note to the plain outlines. The pictures are also realistic. They can be seen through the windows, and change in correspondence with the seasons. As this room is a living-dining-sleeping room, small dining and sleeping compartments hang high on the wall for the benefit of those who desire privacy, while for the more gregarious there are feeding boxes in plain sight. The illustration shows one of these latter rather precariously placed on the side of an open cage, which is occupied by a luncheon party of four. You will note that the pigeons have turned their backs upon this chattering group.

The cellar of the house is unusually well supplied with windows and is flooded with sunshine. Birdcages are hung around the walls in many places. These are made by men and boys in country districts who fashion them with their penknives from bits of wood during the long winter evenipgs. The bars of these cages are set sufficiently far apart to admit of egress and ingress, and the birds regard them as admirable places for nesting. Here and there on the floor of the cellar are small piles of sand and stone, and pans of food and water.

The garden at the back of the house provides rest and recreation for visiting birds. In the centre is a bird bath wreathed in forget-me-nots. At the end of the lawn is a large clump of trees transplanted from the woods near by. This shady spot is full of secrets. Branches are laid from tree to tree on which are fastened receptacles for food and water. Stumps and the flat tops of stones are also used to hold grain and other tid-bits. Beneath the trees are hidingplaces provided for toads. Miss Saunders considers these humble creatures very valuable allies of the birds, for whom they are night deputies to continue the war on destructive insects. She has placed short pieces of logs hollowed out and also large stones under the trees, and under these the toads creep to rest until it is time for them to go on duty. All kinds of birds, lovely butterflies and other gay fluttering creatures find , this shady spot a happy retreat. It is hardly surprising that the young people who come to visit Miss Saunders are convinced that “there are fairies at the bottom of her garden!”

Cupid Among the Pigeons

T/ilSS SAUNDERS has many stories dVito tell of the loves and hates, the selfishness and unselfishness of the various members of her temperamental family. One of these, which I found particularly amusing, concerns the two pigeons, Suki and Milly. Although far removed socially, these two had always been very friendly and in happy agreement. But one day a black male pigeon who had been found almost frozen to death was brought to the house. After careful nursing he was restored to health, and immediately began to make love to both the aristocrat and the commoner. Then trouble began; the birds had to be separated, and the male bird, who was named “MacGregor” employed military tactics, and drove each bird to her nest with the air of a general. They raised their separate families, and finally the younger fry accompanied by the male parent flew out into the wide, wide world and have never returned. Suki and Milly still remain in the family mansion, and, perhaps because of their common grief, are again firm friends.

A Model of Ingenuity

TN ADDITION to her many other interests, Miss Saunders is a most successful gardener, and she and her sister raise beautiful roses and other garden flowers in profusion. Miss Saunders seems to regard her literary success and her unusual aviary and garden quite as matters of course, but she is immensely proud of various contrivances which she has had installed in her house to save labor and time. For example on all the stairways the second step is put on with a hinge which when opened reveals a box for various commodities. Behind the

second step leading up to the front door lies the coiled-up garden hose. The hinged step at the back of the house covers a box for garden tools and odds and ends for the comfort of her animals and birds. A box attached to the kitchen window holds nuts and cakes for the many chattering squirrels who look upon this house as a magic restaurant.

The arrangement of the rooms on the ground floor of the house is such that housekeeping is made easy. At the right of the sitting room is a bedroom; parallel with it and toward the back of the house is a bathroom; behind this again, making the square of the house is another bedroom from which are two doors, one leading into a small screened-in porch and the other into the kitchen. The kitchen lies just behind the livingroom, the door to it being in direct line with the front door as will be seen in the illustration. By this compact planning it is possible to make the complete round of the rooms in a few minutes, either from left or right. There are no long hallways or awkward corners, and no waste space. The stairs to the two upper rooms lead up from the kitchen. Here again we find the hinged step which this time conceals .dusters and brushes.

Miss Saunders’ love for animals and birds began in her childhood in Halifax, and was fostered by her parents who encouraged her to devote a small room to her pets. At one time she had a collection of two hundred birds. It is a pretty sight to watch her with her pets who flutter about her in perfect confidence and contentment.

Altogether this house and garden hold a very numerous and happy family. It is most unusual to find a writer of young people’s classics constantly surrounded with subjects for her stories. I think it was Owen Wister who said that life determines the true character of a house; that it is the work, the hobbies and the wants of the owner which endow a dwelling with individuality, with charm, or with distinction. It seems to me that this little place embodies all these qualities, and in addition will remain a happy memory for those who are privileged to see it. 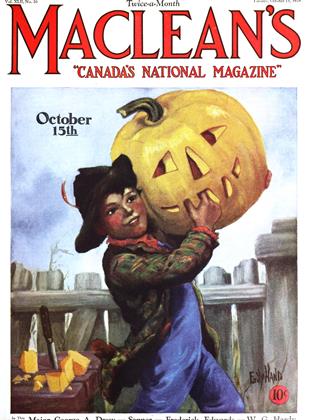